Not all Muslims are terrorists.

ISIS, despite its successes, is a tiny percentage of the world’s Muslims. Also, much of the Islamic world is itself at war with ISIS, trying to end this evil.

At the same time, all of the recent terror attacks, such as 9/11, last weekend’s attacks in Paris, the bombing of trains in Spain, the massacre at the elementary school in Chechnya, and the repeated horrors within the Muslim world itself are Islamic in origin. Add to that the 70-year terror warfare against Israel, and the horror show that occurred in Lebanon. It is clear, for those who are not willfully blinding themselves to the unhappy facts of reality, that there is a consistent problem with Islamic terrorists in much of the world.

I am not saying this because I love being called a bigot and an Islamophobe. I certainly am not saying it because I think that everyone who follows Islam is a terrorist or a bad person. Far from it. I know beyond doubt that most Muslim people are good and moral individuals.

However, we are confronted with a hard reality, and if we want to survive, we need to begin, as the Alcoholics Anonymous people say, to accept reality on reality’s terms. The root reason why the Western world is being held hostage to repeated terrorist attacks is the disastrous and flat-out suicidal immigration policies that it has practiced.

Our media and political leaders push immoral “moral” arguments on us stating that, as we all know, all Muslims are not terrorists. In fact, almost none of them are.

So, in this la-la-land of betrayal of their responsibility to the truth, and in the case of political leaders, to the welfare of those they govern, they use this fact to deny the reality that their immigration policies are importing terrorism, unrest and the destruction of the civil order into our societies.

I am not a European, so I will not speak to what I regard as the obscene neglect of their responsibility to the welfare of the nations that they govern that their leaders have practiced. I am American. So I will address our own government’s refusal to govern on behalf of the welfare of America.

To put it bluntly, we need to change our immigration policies. Our immigration policies should reflect the first responsibility of governance, which is to maintain the domestic tranquility. The American people have an absolute right to expect that those they elect will act in ways that do not undermine their safety in the name of some nefarious political correctness.

The edifice of political correctness has become a thought prison that denies reality and punishes those who refuse to accede to its delusions with social approbation, and oftentimes, legal discrimination. It is being used in a crude and heavy-handed manner to bully and badger people into bowing before the lie du jour.

I won’t get into the obvious lies of moral and social machination which are constantly being pushed on the people of this nation. I will not address the way that our public education system is being used to propagandize our children into twisted thinking that flies in the face of reality.

I will simply address the craziness of immigration policies which continue to bring people into this country from parts of the world which are known to produce organized terrorists. This is being done in the face of nightly news reports that this army of terrorists we call ISIS actively recruits Muslims from America and Europe, trains them and sends them back to us with the intent of wreaking havoc on our lives, property and domestic tranquility.

Our political correctness has become suicidal. Unfortunately, the people who make these policies are well-guarded. They will be the last to pay for their neglect of duty.

At the same time that we are importing terrorists under the guise of “tolerance,” we use “illegal” immigrants for political demagoguery. The Republican political party is very fond of railing at Mexicans during certain election cycles.

Up until Donald Trump’s candidacy, they concentrated this in the off-election years and did not do it during presidential election years. The reason is simple. Attacking Mexicans can be used in off-year elections to win races in a selective way without harming the party. But in a national campaign, the large numbers of American citizens of hispanic origin who are concentrated in states that pack a powerful electoral punch come into play.

In short, the Rs can win a lot of local and statewide elections by attacking “illegal” immigrants, i.e. Mexicans, in by-elections. But they stand to lose the presidency if they go at them in presidential years. So, every off election, the right wing media machine cranks up a “crisis on the border” which they blast out at the public for about six months and then drop when the election is over.

Donald Trump has upset this a bit by raising this issue in a presidential campaign. We’ll have to watch and see what effect that has in November 2016.

Politicians openly try to incite us to hate Mexicans during every off-year election. At the same time, they use appeals to “tolerance”  and telling us not to “hate” to cajole us into a suicidal immigration policy in which they continue to import immigrants from a part of the world which is exporting terror on a mass scale around the globe.

We don’t have to hate Muslims or anyone else to know that this is insanity. Worse, it is a clear dereliction of duty on the part of elected officials of both parties. Let me say that again: The fault lies with both parties.

Both parties are putting this nation and its citizens at risk with their intransigent support of insane immigration policies. They excuse this to We the People with babble about tolerance and how all Muslims are not terrorists. But their true reason is that they are, as they always are, acting on behalf of corporate interests.

In the meantime, we appear to be in a forever war with the people of the Middle East. This war is being sold to us as necessary to “keep us safe.” It would keep us a lot safer, and save the lives of American soldiers, if we just changed our immigration policies.

But — and this is the reason, never doubt it —  there’s a lot of money to be made in war. Not, mind you, by the American people who must fight these wars. The same Congress that could not agree on defunding Planned Parenthood got it all together to shuck the retirement of our men and women in the military. The same Congress that can’t change immigration laws that are allowing terrorists to enter this country somehow managed to agree to raid social security monies.

Our sons and daughters who fight the wars created by our bad politicians’ neglect of their duty do not get rich for their suffering. And the people who get rich from the wars do not fight them. Their children go to elite schools where they are slotted to run the country.

I’m sure that I’m going to be called everything but a nice person for writing this post. I’ll say for the record that I do not advocate hate of anyone. Far from it. Hate separates us from God. It can send us to hell. Hate clouds the mind and makes the hater incapable of thinking straight. Hate is an emotional cancer that destroys its host.

I think we should pray for the people of the Middle East and treat Muslim Americans as our brothers and sisters in this fight against terrorism. But I do not think we should allow further immigration from that region so long as this evil of terrorism reigns there.

I also think that instead of demonizing Hispanics to win elections, we should begin seriously to deal with the problems that create and fuel the illegal immigration in the first place. The first step is to use fines and loss of government contracts and tax benefits to stop businesses from employing them. The second step is to close down the drug cartels.

I would like to have an American government that cared about the American people. I would be gratified to hear a debate in Congress about how our elected officials can help the American people, rather than rip them off. I don’t expect that so long as we keep electing corporatist puppet people.

But that is another discussion. I think I’ve called enough lightning down on my head with this post.

I hope that commenters can engage in civil and fruitful discussion of what I’ve said. I hope I make you think and decide to ask more of our elected officials. If I do that, being called a few names is well worth it. 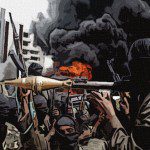 Pope's Prayer Intentions for February 2020
It's late in the month to publish this. But I missed it...
view all Catholic blogs
What Are Your Thoughts?leave a comment