I don’t remember this. I heard the story a lot when I was a child. But the only people involved who are left alive are me and my mother, and she’s gone-gone into the mists of dementia. I don’t expect I will ever hear the story again.

When I was around two years old, my Daddy, Mama, Daddy’s parents and I took a short trip to Eagle’s Nest, New Mexico. We camped out, and got up on a frosty morning to cook eggs, bacon and hash browns over a camp stove.

I remember other cookouts in the mountains like this one from later years. Nothing ever tasted as good as that food, cooked out in the open and eaten with laughter and love in the white-breath-breathing, bone-chilling, teeth-chattering mountain air.

Those were good times. The best times.

But I was two, and I did the sort of thing that earns the name “terrible twos” for that period of growing up. I picked up a handful of sand and threw it into the cooking eggs.

My Daddy, who never spanked me once that I can remember, said he was going to spank me, and my Grandpa told him “Don’t you spank that baby.”

In the end, they took a photo of me, smiling an adorable two-year-old smile at the camera and ate their gritty eggs. Then, they went on to tell and re-tell the story as I grew up.

I didn’t like hearing the story all that much. In fact, I grew tired of all the “isn’t she adorable” talk from my parents, Daddy in particular. He never stopped extolling my cuteness, and later, bragging about my accomplishments. Not until the day he died. And I cringed with embarrassment when he did it.

Now, I would give everything I have just to have him embarrass me once again.

Maybe what’s wrong with our cra-cra president is that nobody gave him this kind of love when he was little. Maybe they were as cruel to him as he is to everyone else now. Maybe he grew up with liars, cheats and phonies who made him into the sick little piece of work that he is.

All I know for sure is that when a two-year-old engages in two-year-old behavior, it has a certain innocent sweetness to it. It is also part of their healthy development into adults. You expect two-year-olds to act like little narcissistic self-gods. You know that, if you raise them well and love them well, they will just naturally grow past it and become beautiful, loving, generous, honest and productive adults.

But when a 71-year-old with the power to destroy all the rest of us behaves that way, we can be pretty sure that he isn’t going to just naturally grow out of it. He’s all done growing. His ways are fixed.

The vile abomination of a man sitting in the White House is not anywhere near normal. He crazy.

The latest in his list of crazy is tweeting a bunch of hate-videos about Muslims. This action earned him an approving shout-out from one of his biggest fans, David Duke of the KKK.

It also garnered a public rebuke from the British Prime Minister, who, in case you’ve forgotten, is head of the government of the country who is our most stalwart ally. President Crazy immediately fired back at her in some sort of public display of his usual trashiness.

And the band played on.

This man would pull down his pants and use the bathroom on a banquet table, right in front of his guests, if he was being ignored. That’s basically what he keeps doing to us with these tweets of his. I think it’s also why he refuses to give up the tweeting. If he did that, it would be oh-so-much harder for him to amuse and amaze us with his attention-getting displays of crazy.

I haven’t watched the videos he linked to, or read his latest attack on some football player for the same reason that I hate cleaning up vomit. It’s sickening.

Our president is crazy. I’m not speaking in technical/medical terms. I’m speaking in common sense, nobody-acts-like-this terms. If he doesn’t have advanced dementia or a brain tumor or something else to excuse himself with, he’s a vile, cruel, vicious, crazy little man.

He is degrading America and Americans with his behavior.

I’ve already written that these religious leaders are not men and women of God. They are political operatives. I’ll take that a step further and say that they are political toadies. They are fawning sycophants who have sold their souls to bask in the glow of power.

You can do what you want about this fast-forward deconstruction of America. But my way is set. I am going to follow Jesus Christ.

Jesus Christ is my savior. I will follow Him as best as I can every step of the way so long as I live. I know that I will fail to follow Him perfectly, and when I do, I will rely on and trust in His Mercy.

I have no other God.

There is no sin these religious leaders will call sin if calling it sin endangers their politics. Their god is not Jesus Christ. They do not follow Him, and you should not follow them.

I fear that we are in for some rocky times. Who knows what destruction is coming at us via this man in the White House and his acolytes. I have no idea what he’s going to do next. And neither does he.

Each one of us needs to make a choice and then act on it. Follow Christ or follow your political god. The choice really is as stark and simple as that.

Because President Trump, he crazy. 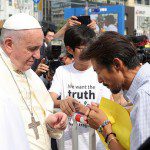 November 30, 2017 Pontifex: Tweet of the Day November 30, 2017
Recent Comments
7 Comments | Leave a Comment
Browse Our Archives
get the latest from
Public Catholic
Sign up for our newsletter
POPULAR AT PATHEOS Catholic
1

Reflections on the Epiphany Insurrection
It is also painfully obvious that the police took much longer to...
view all Catholic blogs
What Are Your Thoughts?leave a comment

7 responses to “President Trump, He Crazy”