Cardinal Theodore McCarrick was prominent in the Church’s response to the clergy sex abuse crisis the United States. That was early days in the crisis. Pope John Paul II was pope, and the Vatican was still sniffing and tutting and dismissing the scandal as an overheated “American problem.”

Former Oklahoma Governor Frank Keating was asked to head the lay oversight commission. Governor Keating had been an FBI agent, and was a former state senator who served with me the first time I was in office. He was also a former federal prosecutor and the governor of Oklahoma during the Oklahoma City bombing.

It’s always difficult to pass legislation opposing sexual assault and rape, because legislative bodies are, to this day, largely male. There are exceptions, but groups of men tend to unite against rape victims and victims of sexual assault. Even good men who would never harm a woman themselves, even fathers of daughters, will go with the boys on this. They identify with the rapist rather than their own wives, daughters, mothers, sisters and friends.

Passing a bill that made it a crime to rape your own wife was an unheard event. It was  “radical” feminism in a world that, like the male-controlled Catholic Church, equates feminism with something repugnant and vile.

I got hate mail and lots of ugly calls, including some threats, from really sleazy men. I also found that not one single senator was willing to author the bill.

I was new on the job, and I had made a newby mistake by passing the bill through the House (how I accomplished that is the topic for another column) without a senate author. Today there are House rules that stop House members from making that mistake, but back then, it could happen.

Normally a senator who opposed the bill — which would have been almost all of them — would have authored the bill to “take control of it.” He would then have killed it in the senate.

I got lucky because none of them wanted to put their name on a bill making it illegal for a man to rape his wife, not even to kill it. That left the bill, floating around in senate limbo during the three-day window I had to find a senate author.

Senator Keating saved me and the bill. I asked him if he would be my senate author. I still remember what happened next. He smiled at me and said, “Of course I’ll help you. What you’re doing is right. It needs to be done.”

Senator Keating went on to be a federal prosecutor and a two-term Governor of Oklahoma. Then, he was asked to be the first director of the Church lay oversight committee on the clergy sex abuse scandal.

If ever there was a marriage NOT made in heaven, it would be former Governor Keating and the bishops. It was obvious to anyone with half a brain that a good number of these bishops were guilty of extensive criminal behavior, and that they almost had to be sexual predators of some sort themselves. Normal moral people can’t do what they did and live with themselves afterwards. Someone who is really a Christian wouldn’t have been able to keep on harming children like this. The Holy Spirit would have convicted them of their sin and they would have had to stop.

The fact that they had kept on and on and on, doing this to children, and were so completely arrogant and unrepentant, said it all. At least some of the bishops were hardened sexual predators who gave every evidence of being sociopaths. That was obvious from the facts.

Needless to say, the whole thing blew up. Before long, Governor Keating had resigned his position, declaring that the bishops behaved “like Cosa Nostra.”

Here is what he said in his resignation letter:

My remarks which some bishops found offensive, were deadly accurate. I make no apology. To resist grand jury subpoenas, to suppress the names of offending clerics, to deny, to obfuscate, to explain away; that is the model of a criminal organization, not my church.

Church officials, and several of the people who served on the committee with Governor Keating denied his charges. Evidently, Cardinal Mahoney, who later came into his own problems, was outraged by Keating’s statements.

As for me, I believed Governor Keating from the get-go.

First, I know the man. I knew that Frank Keating was genuine in his support for victims of sexual assault and rape. I also knew that he loved the Catholic Church with his whole heart.

Second, I had been reading the testimony out of Boston, as well as following the reactions of the bishops. It seemed obvious to me that some of the bishops were very bad men whose indifference to sexual predation was only exceeded by their arrogance. They weren’t just criminals; they were cruel.

As I said, this was early days in the clergy sex abuse crisis. I think a lot of people believed that it would be a self-limiting crisis; that we’d get to the bottom of the barrel of bad fish, expel them from the clerical ranks, change a few procedures, twist a couple of legal knobs, and the whole thing would fade into history.

But those suppositions didn’t deal with the realities of sexual abuse, rape and a true understanding of power. We haven’t gotten to the point that we’ve faced the truth of what we’re dealing with, even now, after all these years.

The sex abuse crisis in the Catholic Church has become a sore that won’t heal, a bowl of soup that won’t empty, an unending series of revelations and betrayals that slash across the claims that the priesthood makes about itself like a knife. The latest installment is, of course, the revelation that none other than Cardinal Theodore McCarrick himself is a sexual predator, and that lots of people inside the Church knew it for a very long time.

It would have been a lot easier on all of us if we’d just believed Frank Keating, back in the day. I can say that because I did believe him. I knew he was telling the truth.

When the stories about Cardinal McCarrick began to surface — and they began coming out years ago — all I thought was uh-huh. That figures. Now that it’s finally reached the point that the dam is breaking and it’s all coming out, I, for one, am not any more scandalized than I was back in 2002.

I’m glad this is coming out. I’m glad that Frank Keating is finally getting his vindication for doing the right thing. I see far more hope in the fact that we’re hearing about all this than I ever did in the covering up and letting it go.

I hope and pray that the victims of sexual abuse from priests feel at least a bit of vindication in this, as well. Some of the most damaging things that we can do to people who’ve been raped, tortured, slimed and dehumanized by sexual predators is to minimize what has happened, blame them for it, or disbelieve them.

The Church has done all those things to victims. It has been anything but pastoral in its treatment of Jesus’ lambs. There is still today a real need for a literal come to Jesus in the Church regarding sexual assault and rape. 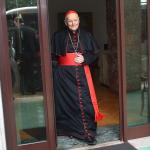 July 27, 2018 Give Me a Minute. I'm Thinking.
Recent Comments
20 Comments | Leave a Comment
Browse Our Archives
Follow Us!

Catholic
The Problem is Sin. The Solution is Him.
Public Catholic

The Problem is Sin. The Solution is Him.
I've published this before. I think we could all use it today....
view all Catholic blogs
What Are Your Thoughts?leave a comment

20 responses to “Cardinal McCarrick: Frank Keating Blew the Whistle a Long Time Ago”