One of the co-signers of a letter defending Brett Kavanaugh has learned that he and his friends used the highschool year book as something akin to a bathroom wall … and they were writing about her.

Ms Dolphin, who, as I said, joined in the defense of Judge Kavanaugh against Dr Christine Ford’s allegations of attempted rape, is now saying that she hopes that the men who wrote these “horrible, hurtful and simply untrue” things about her never have their daughters treated “this way.”

I hate to break it to Ms Dolphin, but this is the way that this kind of man treats women. I’ve seen it over and over again in my professional life. This kind of hazing and sexualizing of women and girls is a way of whittling them down and destroying them as serious people. I’ve heard middle-aged legislators do it to their female colleagues, and they always do it as a group. It is an effective way of destroying a woman professionally.

Ms Dolphin says that she’s not going to make any further statements about this. I rather wish she’d take her name off the letter supporting Judge Kavanaugh. It appears that, no matter what she may have thought, he never was her friend.

September 25, 2018
I Will Not Leave the Catholic Church. This is Why.
Next Post 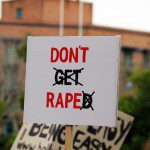 September 26, 2018 Our Rape Culture Runs on 'Friends' Who Don't Stand Up for Victims
Recent Comments
6 Comments | Leave a Comment
Browse Our Archives
get the latest from
Public Catholic
Sign up for our newsletter
POPULAR AT PATHEOS Catholic
1

Civil Unions? Girl Bye...Benedict's the Real Gay Icon
[Camp] is not a natural mode of sensibility, if there be any...
view all Catholic blogs
What Are Your Thoughts?leave a comment