But when he saw the crowds, he was moved with compassion toward them because they were harassed and scattered, like sheep without a shepherd.

And now I’m back.

I am taking up my laptop and writing once again because we are in trouble. Our nation is in crisis and very real danger of being destroyed from within.

Worse even than that — and there are few things worse than that — American Christianity is suiciding its witness for Christ in favor of an overweening political heresy.

Our religious leaders bow down before politicians and political party and they teach us that this is righteousness. They do not teach Christ. They do not follow Christ.

They teach a false gospel which counters what Christ taught in almost every particular, and they do it in the name of Jesus. But Jesus is not their God. Jesus is their lie.

They teach a political gospel that has no cross, no Christ, none of the teachings of Jesus. They teach a “gospel” based on political ambition and crude worship of money and power.

The political heresy is not a new thing. It is old as power and greed.

Practitioners of the political heresy were the ones who killed Jesus. Jesus drew sharp lines of condemnation around what they were doing. The only people He ever condemned were political priests. Here’s what he said to them:

What sorrow awaits you teachers of religious law and you Pharisees. Hypocrites! For you shut the door of the Kingdom of Heaven in people’s faces. You won’t go in yourselves, and you don’t let others enter either.

None of this is why I’m tapping away on my keyboard this morning. I see these things, and I grieve because of them. I pray about it and I plead with God to send us holy religious leaders; not just holy Catholic priests, although I do pray specifically for that, but holy preachers of every denomination.

I ask the Lord to bind them all in the Gospel and send them out to teach and preach Christ and Him crucified. I pray that He will replace the political whores we have now with men and women of God who work to make disciples of all the world.

I want every knee to bend before the cross. All around the globe, from dateline to dateline, I want humanity to call Him Lord.

That is what I pray for. It is what I’ve been praying for throughout my retirement.

I was led by the Holy Spirit to stop writing for publication. I was sick and dying slowly and it all seemed to fit.

I’m still sick. I’m still dying slowly. I’m even older than I was when I first poured the coffee on the fire, hung up my laptop and took it to the house.

But the same Holy Spirit who told me to hang it up, directed me to take it up once again. I am abashed and gobsmacked by what I have been directed to say.

Of all the people I know, I am the last one who should be saying this. I have done terrible things in my life. I am pitted and scarred by the things I’ve done, the things that have been done to me.

I am, even after following Him for decades, after being loved, shepherded, tended, protected, and sometimes directed by the Holy Spirit, a poor example of a Christian. I can name a dozen people in the circle of my own acquaintances and friends who are better Christians than me.

Who am I to say these things? Will I even have the words?

Because I have something to say.

Back when I was making a lot of speeches, I learned to follow Eleonore Roosevelt’s advice on speech-making.

Mrs Roosevelt was shy to the point of backwardness. Her awkward posture and bearing telegraphed this shyness to everyone who saw her.

But her husband was crippled and ambitious. He had no working legs. So her legs often sufficed for his. She learned to make speeches because she had to.

Her advice on the matter was simple. “Have something to say. Say it. And sit down.”

I followed that advice when I was speechifying, and it made speechifying into an easy, do-able thing for me. I’m going to follow it again with this blog.

I have something to say, and I have been directed to say it. I know that most people will be angry because of what I say. I know that only a few will hear me.

That’s ok. I love you all, each and every one. I am so sad and sorry for those poor people who have slipped off the Way that leads to eternal life and onto the way of the political heresy. I grieve over you. I fear for you.

If something I say leads you back, that would be an incredible gift to me. I will see you in heaven and we can rejoice together forever.

November 2, 2018
Will You Vote for Lies, Race Hatred and Fear?
Next Post 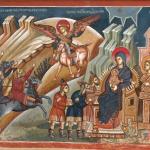 January 6, 2020 Epiphany 2020 vs Epiphany 0. Are We Any Better Now?
Browse Our Archives
get the latest from
Public Catholic
Sign up for our newsletter
POPULAR AT PATHEOS Catholic
1