Businesses are opening and people are beginning to go out again. Unfortunately, the pandemic does not appear to be finished.

In some states that are re-opening, the death rate curve has reversed its downward trend and is heading up once again. I am hopeful that the hot weather will slow the virus’ ability to transmit itself. That would flatten the curve for a few months and give us a chance to roll out a vaccine.

Dr Fauci has said that a vaccine by the first of the year is a real possibility. Meanwhile, Donald Trump has been blathering on in a way that makes it sound as if a vaccine is imminent.

That’s him, lying as usual. This is a perilous place for us to be, but we can’t believe anything he says. Just brush his talk-talk away and listen to Dr Fauci.

This last little bit leads me directly to the first of the 10 things that COVID-19 has taught us. Let’s look at those 10 things.

1. Trump is crazy. I do not mean that in the sense that he’s a lot of fun, or a risk taker or any other benign way. I also am not trying to foist a made-up clinical diagnosis on him. I’m not qualified to make that judgement. I mean that he’s irrational and that his actions are totally governed by his irrationality. He’s crazy, and anybody can see it.

2. Trump is incompetent and his dishonesty is on the level of an ancient Greek myth. America’s response to COVID-19 is the worst in the industrialized world. He has put the United States of America on the same level of governance as a third world, tin-pot dictatorship. We have been blessed to still have honest and sane people in important positions who are left over from previous administrations. They have saved us. But Trump is firing them, one after another, for doing their jobs and telling the truth. Not only is Trump a liar, but he insists that everyone around him be a liar, as well.

3. The right wing will kill Americans and destroy America if their profits are threatened. We have witnessed repeated calls to allow our elderly, and anyone else with a pre-existing health problem, die in order to jumpstart the economy. One commentator on a cable station which functions as Trump’s mouthpiece even said that if we re-started the schools, we would “lose” 2-3%,” and that was an acceptable loss. The right wing does not care if we live or die. That’s not a guess. They’ve told us so and they told us repeatedly. Then they doubled-down and made it absolutely clear. Our lives are meaningless to them.

4. America is weak. Our response to this pandemic has been been like an overweight, out-of-shape former athlete wheezing through a run while little old ladies and Girl Scouts breeze past us. In times past, when we had a sane president (any former president of either party would do for an example) we would have been the leaders in an international effort to stop COVID-19 before it got out of China. That’s what happened when Ebola almost broke lose. President Obama and other countries worked together and they stopped it. If they hadn’t, we’d have had something a lot worse than COVID-19. President Obama also had the foresight to set up a pandemic response team. If Trump had built on that idea instead of disbanding the team, if he had taken this virus seriously from the start and worked as any of his predecessors would have done with other countries to stop it, we might have avoided this entire debacle. But that’s like saying if pond scum was a ballerina it would dance across the stage. He’s crazy, dishonest and mean. He doesn’t care if Americans die. America is weak, brought down by a horrible president.

5. Most Americans are the same can-do, self-sacrificing, noble people we have always been. The only thing that has saved us in this crisis is that some of our governors from both political parties are not right-wing trolls. They have provided the life-saving leadership that was lacking from the top. We also have been saved by government officials who did their jobs and told the truth in spite of the very real possibility that our crazy president would fire them for doing their jobs and telling the truth. We were saved by a free press that goes into press conferences every day with president crazy and suffers his repeated insults and threats. The women reporters are especially liable to being subjected to ridiculous and demeaning insults from the president. This is predictable, since he’s not only crazy, he’s a virulent misogynist and serial sexual predator. Our medical professionals have put their lives on the line for our lives, as have our truck drivers delivering goods, our police enforcing the law, our grocery store clerks who risked infection to make sure we had food. The list of brave and good Americans goes on and on. We all deserve better than a raving nut for president.

6. Some Americans are whiney weaklings who are an embarrassment to the rest of us. Every one of us has suffered losses and sorrows in this pandemic. I was kept away from my dying mother, as a for-instance. Many others have suffered worse. But none of us have complained. We are willing to suffer loss so that other people will live. But there is that subset of whiney fools who complain constantly. Their whinging grates on the rest of us. It is contemptible.

7. Some Americans are scum. On the other hand, we’ve all seen the sorry spectacle of gun-totting adult toddlers parading around at state capitols claiming that stay-at-home orders designed to save their sorry lives mean they are living in a police state. The original protests of this ilk were organized by DeVos-funded organizations in Michigan. Betsy DeVos is a billionaire member of Trump’s cabinet. Her family is active in the same right wing groups who have funded the takeover of our government and churches by right wing fascists. President Trump has supported these protestors from the podium. That’s a pretty strong line of connection. It implies that Trump himself is behind the protestors.

8. America needs to go back to manufacturing its own products. We can’t manufacture even the simplest things to supply our hospitals in a crisis. Q-tips appear to be beyond us. We also can’t supply our own people with the medicines they need by manufacturing them here, on our own shores. Our president is incapable of handling a crisis. Many of our leaders talk seriously about allowing large numbers of Americans die in order to allow the billionaires who have hollowed this country out with their greed to continue making money.

9. Ignorance among the American people is profound. Half the American people believe that Donald Trump tells the truth, is doing a good job and is the chosen one of God. They publish memes of Trump at his desk with Jesus Christ standing behind him. In these memes, Jesus’ arms are wrapped around Trump in a loving embrace and Jesus’ face is awash with admiration as He gazes down at Trump. The implication is that Trump is God’s chosen one, and that these ridiculous and horrible things that he does are ordained by God. We have Catholic bishops telling us we must vote for this crazy dangerous man who is destroying our country or endanger our immortal souls. We have former pro life heroes whose brains have evidently been destroyed by thinking too much about the horrors of abortion, seriously claiming that Trump is the living embodiment of Catholic Teaching. If all this makes you feel like Bonhoeffer in 1934, you are not alone.

10. Trump’s stooge news outlets need to take the “News” out of their title. They are liars and fomenters who don’t care how much damage they do. Their coverage of the COVID-19 pandemic has been destructive, dishonest and downright bloodthirsty. They’re the ones who’ve pushed the idea of killing grandma for the DOW and that losing 2-3% of our children to COVID-19 would be an “acceptable loss.” 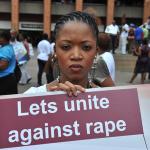 May 4, 2020
This Election is a choice between two sexual predators. If that's not a rape culture, what is?
Next Post

May 5, 2020 Two Kinds of Americans have Emerged During this Crisis
Browse Our Archives
get the latest from
Public Catholic
Sign up for our newsletter
POPULAR AT PATHEOS Catholic
1

Your Choice: The Eucharist or the...
On the Catholic Beat
Related posts from Public Catholic

Catholic
Trump Says if He is Re-Elected He will...
Public Catholic

The Good, The Bad, The Ugly, and The...
These are very turbulent times that we are living in. Here in...
view all Catholic blogs
Copyright 2008-2020, Patheos. All rights reserved.