Matthew McConaughey grew up in Uvalde Texas. He is a gun owner and supporter of the Second Amendment, just like me and a lot of other people.

After the mass shooting at Robb Elementary, he went to Uvalde and spent what sounds like a lot of time with the families of the murdered children and teachers. He gave an impassioned speech today calling for what he named “responsible gun laws.”

His speech gave voice to things that many of us are thinking and feeling.

I saw some angry commentary about what McConaughey said later in the day. Much of it came from Catholic writers and commentators that I know personally. They are big on talking about “pro life” and the “unborn,” They also are condemning toward people who are “pro choice.”

We have no choice in this my friends. We have to be willing to step up and defend innocent life. We cannot accept the wanton murder of innocent people. We are called as Christians to save lives. I agree with Matthew McConaughey’s comments on this issue. He placed the emphasis where it belongs, which is on the victims and the need to take action to save lives.

It saddens me that “pro life” people are attacking him for what he said. I hope they re-think what they are doing.

You can watch McConaughey’s full speech below. 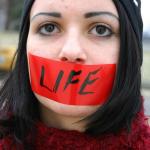 June 7, 2022
All you have to fear is being shot anywhere you go.
Next Post