With this context in mind, we come now to the segment of the conversation that the lectionary has selected for us. In describing this new life that He came to bring, He references a mysterious Old Testament story found in Numbers 21:4-9. In this story, the children of Israel have just won a confrontation with the Canaanites, which was provoked by the Canaanite king of Arad (21:1-3). After winning this battle, the Israelites begin to complain that God is not giving them enough to eat; all they have is the flaky bread called manna (see Numbers 11:4-9). Certainly, their hunger and fear is understandable, but rather than turn to God in faith and ask for His provision, the Israelites engage in deep distrust. What God is asking them to do–live on one boring food, however miraculous it might be–is too much. They want flavor and variety. This complaint is particularly telling since it occurs in the narrative directly after God has helped them defeat a dangerous foe.

We want something dramatic and exciting and fancy; we don’t want the humble food of faith. Similarly, today, we want to be able to accomplish something for ourselves spiritually. We want to pull ourselves up by our bootstraps and let everybody know what great things we have accomplished spiritually. We want a fancy story. We want a platter of self-constructed religion. We don’t want the simple Gospel, which calls to us: “Take and eat.” We are like the Old Testament Canaanite commander, Naaman, who came to Elisha seeking healing from leprosy. When he was told to simply go wash in the Jordan River in order to experience healing, the command was not dramatic or important enough for him.

Elisha sent a messenger to say to him, “Go, wash yourself seven times in the Jordan, and your flesh will be restored and you will be cleansed.”

But Naaman went away angry and said, “I thought that he would surely come out to me and stand and call on the name of the Lord his God, wave his hand over the spot and cure me of my leprosy. Are not Abana and Pharpar, the rivers of Damascus, better than all the waters of Israel? Couldn’t I wash in them and be cleansed?” So he turned and went off in a rage.–2 Kings 5:10-12

A simple command, a simple way of clinging to God in trust offends our pride. How dare He make it so simple that anyone could do it?

March 12, 2015
Vulnerable Faith: A Profound Book on What It Means to Be a Christian
Next Post 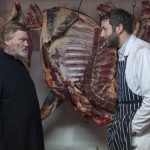 March 16, 2015 Calvary: A Film That Wrestles with the Cruciform Life
Recent Comments
0 | Leave a Comment
Browse Our Archives
get the latest from
Evangelical
Sign up for our newsletter
POPULAR AT PATHEOS Evangelical
1