Doctor Who: The Great Intelligence Trilogy

I neglected to embed links to my previous posts about Doctor Who episodes featuring the Great Intelligence, when I wrote my recent posts about “The Snowmen.”

And so I thought that I would not only go back and rectify that in those posts, but also offer links here in a separate post to those things that I wrote earlier.

The Web of Fear

You can also watch the parts that still exist from those earlier episodes online (both are among the lost episodes from the Patrick Troughton era). Here is part one of “The Abominable Snowmen”:

And here’s part one of “The Web of Fear“:

To get the full effect of the lost episodes, you can always buy the audiobooks, which feature the soundtrack of the original episodes

, or read the novels immediately on Kindle

. Those would be great ways for Doctor Who fans to put to good use Amazon gift cards they may have received for Christmas!

As for me, I tried to build Doctor Who snowmen today, but the snow seemed too powdery. Or perhaps I was tired after having dug the driveway clear for the fifth time…

December 27, 2012 Jay Ungar plays "Ashokan Farewell"
Recent Comments
0 | Leave a Comment
Browse Our Archives
get the latest from
Religion Prof: The Blog of James F. McGrath
Sign up for our newsletter
POPULAR AT PATHEOS Progressive Christian
1 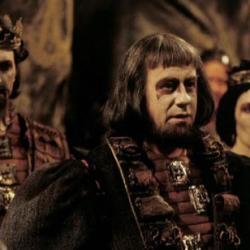