While some political commentators and journalists are wondering what will happen as a result of the failure of the climactic prediction of the anonymous source Q that has driven the widespread QAnon conspiracy theory, religion scholars have a lot of resources and insights to offer and a long history of studying similar phenomena.

My choice of title for this post is intended to draw attention to this. There is a book by the same title, When Prophecy Fails, that is a study of how millenarian movements cope with prophecies not being fulfilled (it is currently only $.99 on Kindle!) The short answer is that it does not inevitably lead to a loss of faith for all believers. Some are holding out hope. Some are actively praying for Biden and his administration to fail, wishing him no success. A congresswoman who is a QAnon conspiracy theorist wants Biden impeached. One thing that differs between the current situation and others from the past we might compare it with is the existence of the internet. Just as it allowed conspiracy theories to spread to an unprecedented degree, it may also allow the “faithful” to find one another and sustain their “faith” and the movement, leading to different outcomes than in any past instance.

As I blogged about previously, Q’s first post was a false prediction, and so it isn’t like the outcome could not be seen coming by anyone with eyes to see and ears to hear. If this movement is like past millenarian movements in the history of religion, some will abandon their “faith” in the conspiracy theory, just as the Proud Boys have abandoned Trump. The QAnon Shaman feels like he was duped. But some will find ways to continue to maintain their belief that their faith has not been misplaced, that the prophecies are not in fact false. Here is one of the reinterpretations of Q predictions that is circulating, which Facebook friend Kevin Wilson saw online and reported on. I will quote what he wrote in its entirety:

When DC was established by the Residency Act of 1790, it was to be a 10×10 mile square centered about a block west of where the Washington Monument is now. The city of Washington was a small area inside the district. On the map below, it is the area bounded by the Potomac River on the south and west, the Anacostia River on the southeast, and a border that ran from the Anacostia to Rock Creek along a path that was called Boundary Road (today’s Florida Avenue). Two other towns already existed inside DC: Georgetown to the west of the city of Washington and Alexandria on the Virginia side.

The section of DC west of the Potomac River was returned to Virginia via retrocession in 1846 because Alexandria was afraid that the slave trade would be abolished in DC (as indeed it was a few years later). The rest of DC, meanwhile, continued with a moderately sized population.

During and after the Civil War, the population of DC began to grow rapidly. Within a few years of the end of the Civil War, it was clear that the civil infrastructure in DC was not equipped to handle the expanding city.

This is where the DC Organic Act of 1871 comes in. That act revoked the charters of both Washington and Georgetown, creating in its place a government of all DC. The Act is a fairly boring document, as it mostly describes the offices and duties of the government and the means for passing local laws. Interestingly, the Act continued to refer to the original federal city as Washington, while referring to the rest of the territory as the District of Columbia. Although Washington is now generally applied to the whole territory, city documents still limit the name Washington to the original area.

With all that as boring background, let’s turn to the conspiracy theory.

According to the theory, the DC Organic Act of 1871 actually abolished the United States as a country and established it as a corporation. Since that time, the United States has existed as a corporation called the UNITED STATES (for some reasons, whether you write it in all caps or not makes a difference). Apparently, whenever you see an American flag with gold fringe, that is the flag of this corporation (or an admiralty court, for some unknown reason), even though a fringe has no significance in vexillology.

The president is the CEO of the US, and the US is a wholly owned subsidiary of the British Crown. Some versions of the theory have the Founding Fathers complicit in the plan from the beginning. Others see it happening in 1871.

In this theory, if the US ever stops having a president, it will cease to be a corporation. You know, just like the way real corporations don’t. And if that happens, it reverts to being a true country.

According to this theory, Trump allowed Biden to be sworn in as president because Biden didn’t win the election. When you swear in someone who was not actually elected, then the president is not truly the president. That means that when Trump stopped being president at noon yesterday, the UNITED STATES ceased to exist as a corporation and reverted to being a country, the United States. Trump allowed all this to happen to gain us our freedom from the British.

Trump will be sworn in as the president of the renewed nation on March 4, as dictated by the Constitution. Remember, all amendments since 1871 will be null and void at that point. When Trump becomes president, he will be the 19th president, since the last valid president was Grant.

I’m just saying you might want to keep your calendar open on March 4.

Just as religious studies can help make sense of what is going on at present, and perhaps help those associated with QAnon adherents navigate their disappointment in healthy and positive ways, there are likely also benefits to making the reverse comparison as well. Many of us study how the failure of the Kingdom of God to dawn in the manner expected by the first generation of Christians in their lifetime, but seeing a comparable phenomenon play out in real time is a different experience and provides insights that reading about it on a theoretical level may not.

Alas this is not a lone example: 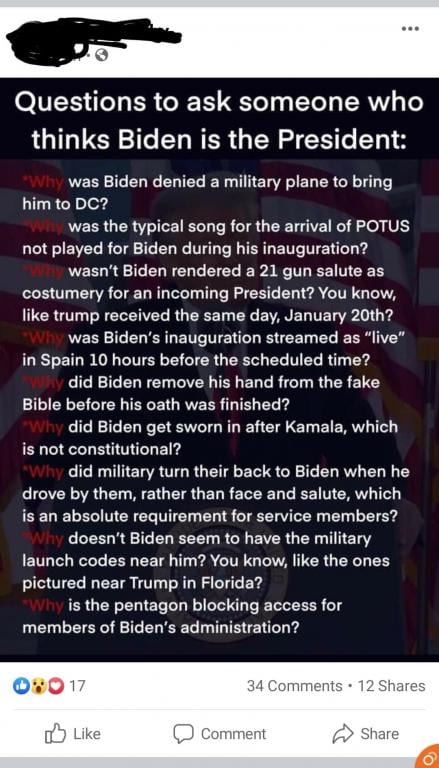 How do we combat this? We can never be entirely successful, but there is widespread distrust in politicians, institutions, “libs,” and “demoncrats.” As Sheila Kennedy keeps emphasizing, without social trust a society cannot endure. Once it has been lost, however, it is hard to recover. For those who have never abandoned a belief that we all have a shared humanity, that the politicians and institutions are ultimately people like ourselves and so the same capacity for good and evil is all-pervasive, I suspect (with no experience of this to know how well the analogy works or doesn’t) it will be like trying to rebuild a relationship with one’s spouse where one’s partner believes there has been infidelity, but in fact there hasn’t been. If we value the relationship then we need to try. If we value America then it simply will not do to write off nearly half the population. The challenging effort to rebuild trust will seem like those who are not the cause of the problem are having to exert most of the effort. Yes, we do, and we will, if we want our nation to succeed in the long term. There is no positive outcome that doesn’t involve persuading those who have embraced lies to return to the truth. Those of us who live in the real world (and know that Gondor is not a real place) will have to be the ones to build the bridge if it is to be built at all. Only reality can build it, just as only truth can build a strong and stable society. Lies and a thick overlay of myth that obscures reality can never do so.

Elsewhere related to this topic:

Four Heartbreaking Stories of Christians Lost to the QAnon Cult

Paul Levinson on why Twitter was right to ban Trump

John Fea shared some of the reactions of Trump-supporting Evangelicals:

The evangelical lost cause is alive and well in Chino Hills, California

On the day of Biden’s inauguration, Trump evangelical John MacArthur tweets that the U.S. is officially “one nation in rebellion to God”

The complicity of the church in creating white supremacist ideology

Why are conservatives angry that Biden denounces white supremacy?

The enduring allure of conspiracies

Court evangelicalism “was not harmless”

Why Trump will never admit defeat

Media, Religion, and Politics in the Capitol Siege (part 2)

The Evangelicalism I Love

What Message Did Biden’s Religious Inauguration Speech Send to Atheists?

Bernie Sanders: Joe Biden must put an end to business as usual and here’s where to start

This Heavy Metal Remix of a Right-Wing Rally is Glorious

‘Not Real Christians’: Communal Confession for a Faith Divided

Obituary for a Failed Presidency

Nathan LeRud Opinion: In the Name of Jesus?

Pastors as Politicians: A Brief History

Will the GOP abandon populism?

Nope, that’s not the gospel

What should we make of Trump’s 1776 Commission Report? Part 4

There are also lots of articles starting to appear on how to broach the insurrection and other matters in the classroom.

January 23, 2021
John the Baptist, the Historical Jesus, and Q #CFP
Next Post