I ended my Baylor graduate course last semester with a one-two punch of books on modern American evangelicals and politics. The first, Jesus and John Wayne: How White Evangelicals Corrupted a Faith and Fractured a Nation, by fellow Anxious Bench contributor Kristin Kobes Du Mez, traces the rise of a brash “militant” version of masculinity within large swaths of White American evangelicalism and its effect on evangelical political and social behavior. Specifically, it contributed to embracing combative foreign and domestic politics and to tolerating bullying and abuse within the church. The second, This is Our Message: Women’s Leadership in the New Christian Right, by Emily Suzanne Johnson, analyses how women within that same culture found their political voice. 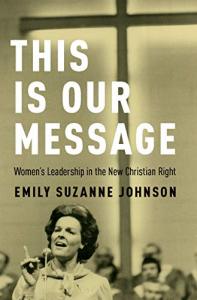 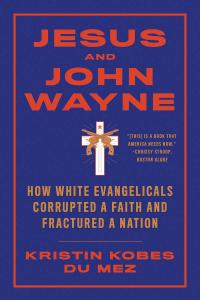 I assigned the books in that order because I wanted to give women the last word. Doing so got me thinking: to what extent are the men and women of the evangelical political right on the same page?

Jesus and John Wayne lays out a pretty harrowing—and convincing—narrative of how twentieth-century White American evangelicals increasingly came to conceptualize masculinity in particularly militaristic terms. Indeed, its central argument is that for many evangelicals, Donald Trump’s poor character and abrasive personality is actually a feature, not a bug. Some evangelicals held their nose and voted for him because of his policies, such as his pro-life stance, but many others liked both his policies and his attitude. Thus, Robert Jeffress, pastor of First Baptist Dallas, declared that he wanted “the meanest, toughest, son-of-a-you-know-what” as president to defend conservative values (258). Jesus described himself as “gentle and humble” and urged his followers to turn the other cheek. But that simply would not do in an earthly protector.

Exactly how many evangelicals in the pew supported Trump for one reason versus the other is difficult to say (and one out of five did neither). Likewise, historian Tommy Kidd noted in Who is an Evangelical? The History of a Movement in Crisis that the lives and identities of many evangelicals revolve less around politics and more around their church and family life, evangelism, and charitable giving. 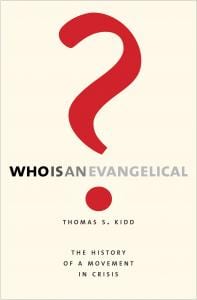 Regardless, Du Mez demonstrates how pervasive this unbiblical masculine ideal had become within American evangelicalism, largely through a shared popular subculture of books, conferences, TV, and film. A poll of my course’s students who grew up evangelical revealed that for some this cultural ideal had been so pervasive that they had never been exposed to any alternative. Others had worshipped in evangelical churches influenced, but not controlled by that ideal. In other words, everyone was touched by it; some could not escape it. Sobering stuff indeed.

Which raises the question of women’s role in all of this. Johnson argues that women played a significant role in the rise of the Religious Right and that, along the way, they simultaneously shored up and altered that movement’s conceptions of gender. Specifically, the book traces how politically conservative evangelical women moved from creating a cultural identity to overt political activism to running for office themselves through the public careers of author Marabel Morgan, activist Anita Bryant, author and activist Beverly LaHaye, televangelist Tammy Faye Bakker, and politicians Sarah Palin and Michele Bachmann. A wildly popular books like Morgan’s The Total Woman bound together conservative women around a common identity of “traditional” gender roles, but it also subtly altered the definition of wifely submission to involve greater initiative and choice. Women like Bryant and LaHaye (and Catholic Phyllis Schlafly) extended behavior considered womanly to political activism on behalf of issues believed to affect the family. Finally, women like Palin and Bachmann directly sought political office for the same ends (as had Schlafly, unsuccessfully).

If Du Mez has demonstrated that the Religious Right advocated an increasingly harsh machismo, how did politically active conservative women relate to this ideal? Some, of course, simply embraced it. (Du Mez noted several of these women, although her focus was on men.) Historians have long observed that men and women of a given race or class often share more priorities with one another than with people of the same sex outside that group. After all, most people live in mixed-sex households but fewer people live in mixed-race households, and households pretty much constitute a single social class by definition. All evangelicals (like most religious believers) attend mixed-sex churches, but fewer churches are meaningfully cross-race or cross-class. 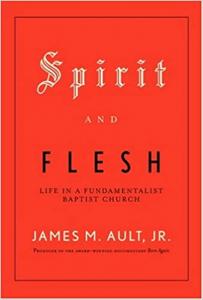 Where Johnson shines is in noting that other women embraced this combative masculine ideal, but slightly softened it, like Morgan softened the common understanding of wifely submission. As Johnson notes—and sociologist James Ault similarly argued in Spirit and Flesh: Life in a Fundamentalist Baptist Church—some conservative women supported this version of masculinity because they came from broken homes and believed it to be the solution to securing men’s commitment to the family and community. But, as independent-minded women, how they understood it to work on the ground made space for significant female initiative.

The most dramatic case Johnson discusses of a woman forging a softened approach to conservative ideals is Tammy Faye Bakker, who retained a belief in the sinfulness of gay sex, but publicly argued for compassion for the gay community during the AIDS crisis rather than joining activists like Anita Baker in portraying that community as the enemy. In a different vein, other conservative women, like politicians Palin and Bachmann, adopted the “feminist” label for themselves, to the chagrin of more liberal feminists. After all, they clearly worked more than forty hours outside the home.

There are implications here both for women’s responsibility and for women’s opportunity. As fellow Anxious Bench blogger Beth Allison Barr once noted, if all the women of a church stopped supporting a particular approach to gender roles, that approach would have to change. Even if women do not themselves embody a particularly problematic masculine ideal prevalent in their community, they retain responsibility to help alter it.

They also have a particular opportunity to do so. Women and men of the same religion, race, class, or political persuasion share many of the same experiences and convictions. But not all of them. Women’s different life experiences open up a space for them to see more clearly some of the troubling aspects of the version of patriarchalism that has taken deep root within modern American evangelicalism.

A clear recent example is popular Southern Baptist Bible teacher Beth Moore. In 2016, many of the male leaders within her evangelical subculture excused Donald Trump’s “Access Hollywood” claims about committing sexual assault as “locker-room talk” that didn’t hold much significance compared to his policies. But, unlike them, Moore was a woman and an abuse survivor. Seeing the world from that position gave her a different perspective, one that galvanized her to say, in essence, “no, that is not OK.” Her denomination, the Southern Baptist Convention, now remains in the throes of a reckoning over its handling of accusations of sexual assault within its ranks. That reckoning has been led by vocal women such as Moore, Rachael Denhollander, and Karen Swallow Prior.

None of this excuses men from cleaning their own house. And several prominent evangelical men such as the Southern Baptist Convention’s Russell Moore have indeed both spoken against Trump’s character and held their denomination to account for its handling of sexual abuse. We are all responsible for our own beliefs and actions. Not only must women speak up; men must pay attention. When a big part of the problem is a warped understanding of masculinity, a big part of the solution will be listening to women.

Many women are speaking; many more could. For both evangelical women and men, change will require a willingness to sacrifice power and influence—personally and politically—on behalf of the true and the good. 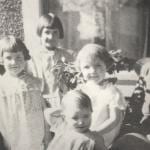 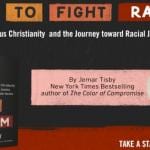 January 7, 2021 Jemar Tisby’s How to Fight Racism
Recent Comments
0 | Leave a Comment
Browse Our Archives
get the latest from
Anxious Bench
Sign up for our newsletter
POPULAR AT PATHEOS Evangelical
1