“Those Who Have Ears, Let Them Hear”: #BlackLivesMatter and the Gospel

“Those Who Have Ears, Let Them Hear”: #BlackLivesMatter and the Gospel November 3, 2015 Andre E. Johnson

In 1968, theologian James Cone wrote what was then and still is a much contested essay. Titled Christianity and Black Power, Cone argued that Black Power, “even in it most radical expression is not an antithesis of Christianity,” but it was “Christ’s central message of 20th century America.” He warned that if the Church does not make a “determined effort to recapture “Jesus” through a total identification with the suffering poor as expressed in Black Power, then the “church will become exactly what Christ is not.” Therefore, he reasoned, “that “Black Power was necessary if the church wanted to remain faithful to the traditions of Christianity as disclosed in the person of Jesus Christ.” Cone, in his Gospel and the Liberation of the Poor essay in 1981, reflecting on that time wrote

I attempted to demonstrate that, contrary to popular opinion, black power is not alien to the gospel. It is the gospel of Jesus Christ. I knew that this extreme way of expressing my point would not be accepted by white theologians and preachers who were contending that black power mean reverse racism and black violence. The anticipated white rejection of my equation of Christianity and black power encouraged me to write an extended argument in its defense.

Of course, that extended defense would become his foundational work, Black Theology and Black Power. Writing the book was a “deep emotional experience” for Cone. It was for him a “cleansing experience,” because he wanted to “purge” himself of any “direct dependence upon my white theological mentors.” While he did not know how much he succeeded in this goal, (indeed, one of the earlier critiques of Cone’s work is that it was not Black enough—meaning not enough Black sources and heavily depended on European theological sources and foundations) he “delighted in exposing the blindness created by their own racism.” For Cone, he wrote that it was a “choice between satisfying the theological values of white people’s racism and saying a word of encouragement for the black freedom struggle.” While he was very much aware of the “possible ideological distortion of the gospel in identifying it with black power, he “felt that the urgency of the black situation demanded that the risk be taken.”

Recently, I participated in a discussion on Black Lives Matter with Broderick Greer of Theology Live. In our question and answer session, I argued that Black Lives Matter is a manifestation of the Gospel, but then I took it further. I started to think about Cone and the contextual realities that faced him in the late 1960’s. I started to think about the protests, the uprisings in response to the wanton and unabated police brutality that went on in Black communities throughout America. I started thinking about how Cone had to grapple with being called a racist when he merely pointed out the racism that was (and still is) embedded in theological discourse. I started thinking about not only how both the white and black church thought Cone had lost his mind by identifying with “those people” protesting out in the street, but also arguing that the Gospel is a liberating one that stands with the oppressed. I started to think about how much grief that irreligious Black Power advocates gave Cone because he believed that Black Power was the Gospel. I thought about all of that and then thought about my time—almost 50 years later. I thought about what’s going on today and I began to see some similarities.

I began to see that despite the dubious claims of a Ferguson Effect that state sponsored crime against black bodies is only increasing. I began to see the low regard that many have for black women and especially black girls. I began to see a church that despite almost 50 years of Black,  Womanist, Feminist and Liberationist Theology to draw upon still struggle with racism, sexism, homophobia and calling out prophetically White Supremacy. I began to see people who instead of acknowledging the righteousness of Black Lives Matter at best, try to co-opt the message or at worst claiming that it is an example of reverse racism or plain racist. I began to see that while things have gotten better, things also are demonstrably worse, I am ready to proclaim as Cone did with Black Power, that Black Lives Matter is the Gospel. Those who have ears, let them hear.

You can hear the podcast here 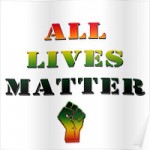 November 2, 2015
The Illusion of Inclusion: When All Lives Don't Matter
Next Post 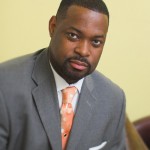 November 7, 2015 Welcome to R3: Fredrick D. Robinson
Recent Comments
0 | Leave a Comment
Browse Our Archives
get the latest from
Rhetoric Race and Religion
Sign up for our newsletter
POPULAR AT PATHEOS Progressive Christian
1