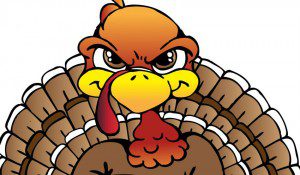 Except, it’s not a Christian holiday. It’s not part of the liturgical calendar, and they don’t really train us preachers in how to deal with it. Like Memorial Day or the Fourth of July, it’s just one of those secular, civil holidays that many American church-goers “assume” is blessed and sanctioned by the Church.

Now it’s not like Thanksgiving is foreign to Christianity. We tend to think it’s good to give thanks to God for the many blessings in our lives.

I want to suggest that there are 3 ways Thanksgiving can be approached and understood:

The first way is what I’ll call the “Hallmark Card Cultural Expectation” approach.

This time of the year, we’re awash in reminders that we should be grateful for our families, for our jobs, and our homes.
Heck, there’s even greeting cards and e-cards that say all of that for us – and all we have to do is sign our names!
This approach is really just a token, obligatory, 1 day affair that has us marching in lock-step like good little consumers who pay an average of $50 to host dinners and forcibly spend time with our families – whether we want to or not. It’s kind of like how we all just stand up and place our hands casually over our hearts at the start of a baseball game while someone sings to us – because hardly any of us can sing these days – so we pay someone to do it for us (which leads to more of us not being able to sing). This approach to Thanksgiving is basically a perfunctory one that’s not particularly deep.

Then there’s what I’ll call the “Spiritual-Religious Guilt Trip” experience.

This is the time of the year when remind each other to “have a gratitude attitude” and we pass around memes that feature Meister Eckhart’s famed words that “If the only prayer you ever pray in your life is ‘Thank you’ – that would be be enough.” Aw. That feels so dang true and we just want to bottle that up and post it as a meme on our Facebook walls to let everyone know that “we’re in the hip spiritual gratitude club.” Sort of like “Spirit Day” in high school.

Yes, that prayer can actually be a deep and meaningful one – but more often than not, we’re content to pass along the illusion that we’re taking it deeply and meaningfully.

Sometimes we remind ourselves of how Jesus healed 10 lepers and how he told them to show themselves to the Temple priests so that they could be validated as cleansed and rejoin full life in their community. What a great thing! And we remind ourselves of how one of those lepers who’d been healed came back to Jesus to say thank you, and how Jesus responded, perhaps sounding a bit like Mel Brooks, Jon Stewart, or Billy Crystal doing their New Yorker-Yiddish schtick “What’s this? TEN were healed but only ONE comes back to say thanks? Oy! Some people. Tttssk tsssk.“

Now, I don’t really think Jesus intended to come across that way or for us to do this with that story … but we often do it none-the-less.

And when we partake in Holy Communion, there’s that part of that ritual called “The Great Thanksgiving” where the pastor/priest says “Let us Give thanks to the Lord our God” and the people respond “It is right to give our thanks and praise…”

And it is right and good to give our thanks and praise – but we tend to not really do much praising. It’s often more of an obligatory, expected, and rote thing. It’s a mere rite that’s not really heart-felt or integrated in our lives.

But there’s another way of seeing Thanksgiving that I want to lift up. It’s the one that is working for me this year. I call it “Thanksgiving Defiance!”

While it is no doubt the case that we are all blessed to varying degrees in many ways in our lives — it’s also the case that there are some years where we don’t feel particularly blessed or grateful. This may be such a year for you.

Sigh. Yep. This all can make it hard to feel particularly grateful.

There are 2 components to this Subversive-Defiant approach to Thanksgiving:

It’s good to remind ourselves that not everything is going to hell in a hand-basket in life. In fact, some things are going very well indeed!

We’re about to wipe out the horrible disease known as Polio from the face of the earth – within 5 years or so – it’ll become a relic of the past. No need for Polio victims to go to Jesus for healing! Similarly, it’s looking like there are some promising new pills that may prevent people from getting HIV. That’s a big deal!

Also, human aggravated Global Warming – is actually currently being kept in check! All of the particulates being spewed into the atmosphere from massive wildfires, volcanoes that have erupted, and even from some pollution that our coal plants have been releasing- have actually been keeping things cooler than they otherwise would be. Okay, this is a strange thing to be grateful for, but it’s true. Now clearly, that’s all very temporary and not sustainable, but I’m grateful.

The crime rates in the U.S. in recent years are lower than they’ve been in the past several decades. And historians have pointed out that, despite the occasional acts of terrorism, this is actually the least violent time in recorded human history!

And many of us progressive Christians are very grateful for the U.S. Supreme Court’s ruling that made marriage for persons of the same sex – legal the law of the land in all 50 states! This actually happened in our lifetimes!

And it didn’t happen randomly or by accident. It happened as a direct consequence of our many years of defiant hard work and subversive activism.
We fought for this and our fight has been won!
Yes, there’s more work to do to truly do right by our LGBTQI brothers and sisters, but there’s a major victory to celebrate.  As Martin Luther King, Jr. put it, “The moral arc of the universe is long – but it bends toward justice.” It’s good to be reminded of that.

The second component is Accepting & Owning our Lot and our Plight in life.

This is a tough one, but it’s essential. We need to make peace with the fact that not all is well in our lives – and some things may not get better.

I divorced 10 years ago and have had series of relationships since then – but none of them have taken or stuck. I’ve seen several therapists over the years and one of them in particular was memorable. I went to see a Buddhist counselor – once.
I only went once because I hated what he had to say. And it wasn’t a long visit.
After hearing my tale of woe, he said,

“Yeah, that sounds tough. It sounds like you’re not good in relationships. That they’re hard for you. That they don’t last long. And you know what? It may not get better. It may never get any better.”

Wait. I’m paying you $120 of my hard earned money – how about some coaching tips? How about some homework for me to do? How ‘bout some encouragement?!

Alrighty then. Thanks for nothin’! Good luck being a therapist who tells people that “things won’t get better. “

It’s the truth. Things can’t get better unless we truly admit and own how bad things are – and wrap our minds around the notion that they may not improve.

It’s only from that place that we can truly move forward to be open to new possibilities. Jesus wasn’t fully free to proclaim his counter-cultural teachings and his subversive kingdom – until he owned the fact that he would likely be executed by the worldly domination systems. Until he could own his death – he couldn’t live. Indeed, that was one of his key teachings for his disciples to learn – the calling to “pick up our cross and follow him” and be willing to forsake our lives – in order to truly live.

The poet Mary Oliver puts it this way, “Someone I loved once gave me a box full of darkness. It took me years to understand that this too, was a gift.”

In my case, I couldn’t be free to live into my new life until I could say, “I’m Roger and I have failed relationships/I’m not good at romantic relationships.” It’s like someone at AA saying, “I’m Joe and I’m an alcoholic.” It’s liberating to own our brokenness. To be able to admit the thing that we most truly don’t want to admit – frees us.

And the Serenity Prayer is a powerful tool that helps us stay sane, be okay not being okay, and and move forward – day by day.

One aspect of this subversive approach is embracing a hint of the adage that “the best revenge is a life well lived.” (George Herbert) We’re basically saying to the world, … “I’ve been dealt a crappy hand of cards, but f- it, I’m still in the game and going to keep playing anyway. Here, I’ll even let you see my hand!”

Such vulnerability is potent. Powerful stuff this.

The defiant cartoon on the cover of the current Charlie Hebdo magazine depicts this well. It features a Parisian citizen eating and drinking as is his lifestyle – despite being shot up with bullet holes. 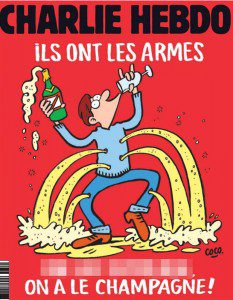 It embraces something I’ve long said, “For Christians, the glass is neither half-full nor half-empty. Its got holes in it, but it’s over-flowing!”

There was recently a story in the news about a 6 year old boy who “gets it” and who defiantly is thankful for his ability to bring smiles to the faces of others – despite profound loss and grief in his life. See video.

And just yesterday, I was blown away by the powerful testimony of a Frenchman who defiantly refuses to give ISIL/ISIS the gift of his hatred – as he refuses to be hateful in a context where many people likely would be hateful. See video.

So… with this all in mind, let’s sing a classic hymn – It is Well With My Soul – and how ‘bout singing it with a spirit of Thanksgiving defiance?!

P.S., Here’s a bonus serving of Defiant Thanksgiving desert. For those who say they “don’t see any Muslims speaking out against ISIS” – behold. These girls have more bravery in their left nipples than the bigots on all sides, including in the US, will ever know in their entire lives. 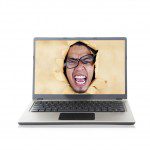 November 10, 2015
Enough With the Progressive Christian Outrage Machine!
Next Post