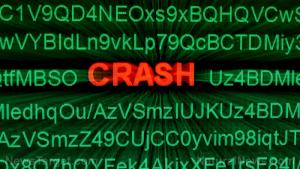 The current collapse of Cryptocurrencies is like the current collapse of Christianity. At the moment, people are selling off crypto in droves and Westerners are disassociating from Christianity like it’s the plague. The rumors of the death of Crypto, Christ/Christianity, are sorely over-stated. Collapse doesn’t mean death. In the case of these two concepts, collapse is a needed course correction to allow what are blessed gifts to the world to be honed, take root, and emerege to make needed change in the world.

Both Cryptocurrencies and Christianity are ideas that lead to people finding meaning, purpose, and motivation to investing in them – even though they may seem counter-cultural, subversive, unconventional, irrational, and strange.

Both Cryptocurrencies and what have become the most popular forms of Christianity in the West – conservative evangelicalism, fundamentalism, and the gospel of wealth, success, and prosperity – all sound too good to be true. Mostly, because that is accurate..

Neither Cryptocurrency nor Christianity will completely disappear, but the worst of their excesses and extremes are worthy of pruning, and even dying off, so that the best “the gold” (pun intended) can live on.

Crypto is completely transparent. Everyone sees every single transaction (though pseudonymous to the public, it is traceable).

Crypto is un-hackable. (yes, for now, but it is). Perhaps a bit like Louis Zamperini and his dogged Unbroken belief in God despite his torture at the hands of sadists in Japanese prisoner of war camps during WWII. In fact, as the ancient Romans learned, the more they persecuted the early Christians, the more they crucified, had mauled by lions in stadiums, or lit up as human torches along their roadways, the more Christianity took off like wildfire.

Crypto lifts the poor and needy more rapidly than any fiat currency (which are subject to graft and corruption, theft, and embezzlement) can.

Crypto is helping developing nations leapfrog over industrialization straight to the information age.

Crypto by-passes the traditional money system that is owned by and regulated for the benefit of governments and the wealthiest humans.

Crypto offers instant commerce and banking to oppressed people in places where people have been previously unable to bank – save, spend, grow, earn.

Crypto is both a value for trade taking on the features of a currency, and an “investment” like stocks & bonds. In terms of market behavior, it’s a lot like stock exchanges, only it’s more egalitarian, democratic, decentralized, and spread all over the plant. No one government nor regulatory agency has control over it. This means it’s less manipulable by the powerful and greedy.

Crypto is so powerful that it can virtually eliminate contract disputes. Blockchain technology can hold all kinds of “value” not just monetary. It can hold anything that can be digitized that people want to trade – text, intellectual property, songs, books, contracts, images, discoveries, inventions… it no longer stands for just a value of trade but the item of trade itself.

Crypto is no less than a revolution. The people who started it intended to take control away from the banking system and put it in the hands of people. They envisioned it as a technology – then they pulled it off. 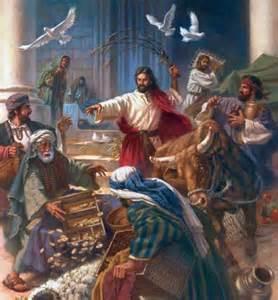 Seems to me the Jesus of Nazareth that I know and believe in would not only approve of the emergence of cryptocurrencies but his throwing the tables in the Temple courtyard is very much like what crypto is doing in the world. Jesus may’ve been a cypherpunk himself.

According to great Christian authors who have sought to understand Jesus in his socio-political context, Yeshua of Nazareth assessed the over-taxed plight of the oppressed people around Galilee and saw that they were beholden to Roman values, culture, ways, and imperialism. He saw that the Roman practice of latifundia had turned Israel into a banana republic that grew olives and harvested fish – for the Roman Empire. Jesus saw that his people were paying taxes to fund their own subjugation and oppression and support the blasphemous cult and false god of Caesar!

In response, Jesus had a vision of his people getting off the imperial grid, switching loyalties and allegiances, and subversively committing themselves to live communally according to Godly values and ways in God’s kingdom instead of Rome’s. Jesus literally proclaimed the “Empire of God” (“kingdom” overly softens the Greek word basilea) as the alternative to the Empire of Rome. Jesus and his early followers subverted Roman concepts and occupied them for their own purposes. They stole the Roman concept of “gospel” and replaced its actual bad news with what they knew to be actual good news of liberation free from Rome. If you read the gospels, particularly the Gospel of Luke (and that author’s accompanying book of Acts), with this in mind – those with eyes to see will see.

Christianity is due for a death. Persons in the West who identify as being Christians are dropping off like flies. And it’s okay. It really is.

As I ended a previous blog: “Christianity in Crisis – from Fear to Faith”

“….What if we were to trust that the well of our religion is deep and it truly does reach the stream of living water – and it’s good! What if we were to allow other religions to do it their way, and join them in focusing on compassion, justice, mercy, grace, & purpose?

Christianity in 2099 will look different than the tree we know now. It may even look like it’s growing sideways. But its roots will still tap deep, and its limbs will still grow toward the heavens. It’ll still transform lives & help people experience Christ & know Christ consciousness.

What’s the worst that can happen? ..We’ll die? Aren’t we supposed to “pick up our cross” and follow him? Like a nurse log in the rain-forest, new shoots will spring forth from our rotting core. We get to ride this wave for the time that we’re blessed to – and love a lot of people along the way!

As Martin Luther put it, “Even if I knew the world were to end tomorrow, I’d still plant my apple tree today.”

Special Thanks to Martha Hartney for the information about Cryptocurrency and their merits.

For more about cryptocurrency see:
1. The Podcast “The Giant Pool of Money”
2. The documentary “Banking on Bitcoin” (on Netflix or Youtube).
3. The book The Industries of the Future by Alec Ross
For more about Jesus’ Anti-Imperialism see:  Unveiling Empire: Reading Revelation Then & Now, by Wes Howard-Brook and Anthony Gwyther 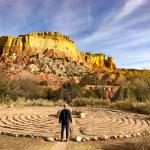 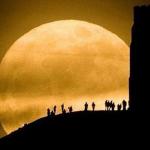 February 9, 2018 Let us be the Super in Supermoons.
Browse Our Archives
Follow Us!

We Are 'Hosanna People': Palm Sunday and Coronavirus
Palm Sunday's 'Hosanna' takes on a new meaning when facing the coronavirus...
view all Progressive Christian blogs
Copyright 2008-2020, Patheos. All rights reserved.