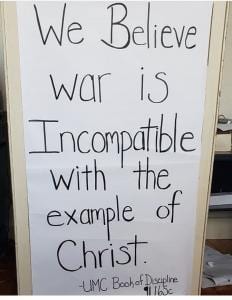 At the start of this new year, this last year of our current decade, President Trump ordered a drone airstrike to assassinate a high ranking military official of Iran, General Qassem Soleimani – the person largely responsible for the (near) end of ISIS.

The assassination took place on Jan. 2, 2020. This action was the equivalent of a head of foreign nation ordering the killing of the Secretary of Defense of the USA. By any measure, an act of war – reminding many of us of the start of WWI, with the assassination of Archduke Ferdinand, and we are hoping that a similar domino effect escalating to rapid full out warfare does not occur. But historically speaking, there’s not good reason for us to have such a hope. Human history is rife with acts of vindictive reprisals in response to such actions.

The Trump administration contends that it was “a preemptive measure taken to prevent the future killing of Americans.” So far, the administration has not provided evidence showing that any such planning to attack Americans was in works – let alone that such attacks were ‘imminent.” Here is a timeline of the events that unfolded – and notice that there are a lot of unsubstantiated allegations being declared by the Trump administration. This reminds many of us of the many unsubstantiated claims (lies) about Saddam Hussein and Iraq uttered by the George W. Bush administration leading up the the illegal, unnecessary, and immoral preemptive war in Iraq in 2003. All of those claims have since been dis-proven – and there were analysts within the State Department who were questioning and even denying them in the months leading up to that war. 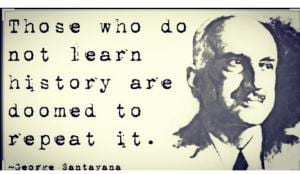 What’s also similar is that Iraq was contained by the sanctions in place by the world community prior to 2003, and Iran’s efforts to pursue nuclear weaponry have been contained by the deal signed by Obama. In both cases, Republican presidents were not in favor of the containment polices that were in place, and seeking to redo things on new terms. And to remind us, neither Iraq nor Iran were involved with the attacks in the U.S. on 9/11/01, and also to remind us Iraq and Iran were a check to each other prior to Bush taking out Saddam in 2003 – which then created a power vacuum in the Middle East, which led to the creation of the ISIS terrorist group, which increased global terrorism, and led to violent uprisings and civil wars across the region. Those are the facts.

Now, going back to Trump’s claims that Gen. Soleimani was engaged in planning to have Iranian agents commit violent attacks against Americans, even if those claims will somehow be proven to be true (not holding my breath), that doesn’t give the U.S. the right to commit an act of war. Period. Moreover, to the extent that certain Christian leaders and conservative evangelicals in the U.S. are rallying to support Trump’s illegal actions – it is also a fact that neither what George W. Bush did in 2003, nor what Trump did on Jan. 2, met the criteria of a Just War. Trump has in fact doubled down since the assassination he ordered saying that if Iraq retaliates, he’ll order 52 attacks on Iran which in a show of disproportionate force beyond simple tit for tat reprisals. That is a matter of public record.

Let me state something on public record. Setting aside the in-house debate about whether Christians can condone warfare in any circumstance, there is no way a Christian, let alone a Christian leader, can endorse warfare that doesn’t meet the criteria of Just War theory, and there is absolutely no way a Christian can advocate disproportionate violence – even to the point of violating international law and attacking cultural sites and targeting civilians – war crimes.

I did all that I could as a citizen activist and religious leader to prevent the war that George W. Bush waged in Iraq in 2003. And, when he waged that senseless war anyway, I took my role to heed to my baptismal covenant to “reject evil, injustice, and oppression in whatever form it may show itself” seriously. I took my calling to hold Bush, a fellow United Methodist, accountable to stated United Methodist positions about warfare. As co-chair of the Church and Society Network of the, then, Rocky Mountain Conference of the UMC, I wrote legislation to be considered for adoption into the UM Book of Resolutions that redoubled our commitment against warfare, by specifically stating that “We believe war is incompatible with the teachings and example of Christ. We therefore reject war as an instrument of national foreign policy. We oppose unilateral first/preemptive strike actions and strategies on the part of any government.” That wording was adopted into our Book of Resolutions in 2004 and remains in effect to this day ( ¶165.C). It was Bush’s Church rebuking what he did in Iraq – and seeking to sway the U.S. to never engage in such a thing ever again. 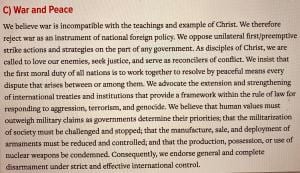 An earlier version of the UM commitment against war had been diluted a few years prior such that it stated, “on matters of war, we recognize that we are of different minds”…. which allowed United Methodists to have different views on such matters. Would that we had instead had such a gracious and broad perspective when it comes to human sexuality and orientations. Yet Jesus never said a word about homosexuality, but he was a consistent teacher of pacifism and non-violence. And he rebuked the use of the sword saying, “those who live by the sword shall die by it.” And no, Jesus didn’t endorse swords – or guns. Jesus was right. Violence only begets more violence. History testifies to this.

The Bush Doctrine of preemptive war violated Christ’s precepts for peacemaking. This anti-Christ dogma opposes Jesus’ teachings by engaging in terror. Bush’s imperial vision necessitated a gruesome and endless “global war” against terror. It had felt to many of us that the Pandora’s Box that was our nation’s mis-adventure in the sandbox of Iraq led to a solid consensus that preemptive warfare is something our nation would never engage in again. It seemed to be self-evident common sense – something that apparently Donald Trump completely lacks. (Note: a majority of US military veterans think that our wars in Afghanistan and Iraq were not worth it) 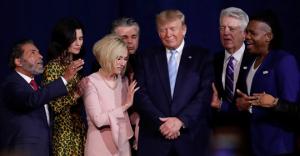 On paper at least, Trump claims to be a member of the Presbyterian Church USA and that denomination has similar stands against warfare. I call on the PCUSA to rebuke Trump’s actions in this act of war. And I call on the cabal of evangelical “leaders” who have rallied around Trump to blasphemously attempt to give Divine blessing to Trump’s illegal act of war – to repent and to step away from their self-glorifying roles to be part of Trump’s Spiritual Advisory Team. You are a Coalition of the Killing that is in collusion with Empire. You are false teachers and you are serving the spirit of satan (the adversary/enemy of all that is holy) – not the Holy Spirit or the living Spirit of Christ.

In Pax Christi, not Pax Americana,

** If you would like to become a patron of Roger’s work as a spiritual writer, please click Here to learn more. 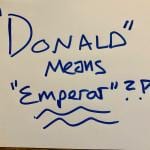 January 25, 2020 Ending the Civil War. Ways to Engage.
Recent Comments
0 | Leave a Comment
"And it should also be mentioned that his grandmother‘s name was Elizabeth Christ Trump. She ..."
Roger Wolsey Donald Trump is The Highlander?
"See also this powerful six minute video clip. Testimony of a military veteran about the ..."
Roger Wolsey Why America isn’t a Christian Nation.
""Instead of presenting God as a dictator or monarch who calls the shots, panentheism understands ..."
BrotherRog Groovin’ With God – beatnik process ..."
"The Church is not in any danger of dying. Matthew 16:18And I tell you, you ..."
Bob Shiloh 10 Ways Churches Could Bring Us ..."
Browse Our Archives
Related posts from The Holy Kiss