Somewhere in my mid-twenties, I was invited to attend The Porch by a friend. The Porch was a weekly young adult ministry taking place at Watermark Church in Dallas. I enjoyed my experience so much that I became a regular attendee and watched in amazement at how this ministry changed the spiritual landscape of twenty-somethings in Dallas and which now sees regular attendance from about 3,000 single adults each week.

God certainly has his hand in this very special ministry and one of His greatest tools is The Porch’s leader Jonathan “JP” Pokluda. A pastor friend of mine recently asked me what made The Porch so unique and special, and the first thing I pointed to was the passion, authenticity and directness of it’s leader JP. JP has a special gift of speaking in a very straight-forward way that reaches the heart of his audience.

Over the course of the next week, I’m excited to share three of JP’s own blog posts that I believe will speak to you all who follow me. Enjoy!

No one ever plans to ruin their life. Nobody makes that a goal, or a New Year’s resolution, or an integral part of their 5-year plan. Kids don’t sit around and dream about growing up to be an alcoholic; students don’t go to class to learn how to be bankrupt; brides and grooms don’t go to the altar expecting their marriage to fail.

Nobody ever plans for it, but it does happen. It happens far too often. And it happens because of the choices we make, even though that is not a result that anyone would ever willingly choose.

Most of those choices take place when people are relatively young—old enough to be making important decisions about their life, but young enough for those decisions to snowball and grow to have disastrous consequences. In other words, these are choices of young adults, which is the prime demographic for The Porch.

How can we avoid making such mistakes? Below are 10 things people can do to ruin their lives while still in their 20s. It is a list of what not to do, or things to stop doing immediately if you don’t want to suffer the results.

1. Believe that ideas don’t have consequences.

This was the biggest lie I believed in my twenties. I thought I could do what I wanted and get away with it; after all, I’m young. But I’ve since learned otherwise. Right now you are in the process of becoming what you will one day be. You are preparing for something. You are either doing the things that will prepare you to be a great spouse, parent, employee, friend, etc.; or, you are preparing to be the opposite of that. Everything you think and do now will lead you down one of those paths.

The simple believe anything, but the prudent give thought to their steps. – Proverbs 14:15

2. Live outside your means.

Ah, Dallas, the city that practically invented the term “$30k millionaire.” But when you spend more than you can afford, you still have to pay for it—plus interest. By living the “good life” now, you ensure you’ll be living the bad life of debt payments, downsizing, financial worries, and delayed/nonexistent retirement in your future decades. Many people today are still paying for experiences that happened years ago, long after the “instant gratification” has been forgotten.

The rich rule over the poor, and the borrower is slave to the lender. – Proverbs 22:7

Whether it is alcohol, money, drugs, pornography, shopping, or whatever, it seems like most people have an addiction of some kind. These addictions bring death: either literal death, or death to relationships, to freedom, and to joy.

How do addictions happen? You feed them. I’ve been addicted to several things, and each of them took work to develop. You don’t drink one beer and immediately get addicted; it takes repetition, just like exercise. The more you do a thing, the stronger the addiction grows, and the harder it is to stop doing it. Stop now; it will only be harder with “one last time.”

The righteousness of the upright delivers them, but the unfaithful are trapped by evil desires. – Proverbs 11:6

Fact: you are becoming who you hang around with. It’s been said you are the average of the five people you spend the most time with. You do what they do (because you’re doing it together), you pick up on their ideas and beliefs, and you even learn their mannerisms and language.

Walk with the wise and become wise, for a companion of fools suffers harm. – Proverbs 13:20

5. Carelessly give your heart away.

Want heartbreak? Give your heart to someone who will break it. And how do you know who will break it?Everyone will, except for someone who truly commits to protecting your heart and loving you until the end, no matter what. If they are really willing to commit to that, they will gladly do so officially through marriage vows. So, only give your heart away once—at your wedding. Until then, be careful with your heart. Be careful with what entertains it and what you allow it to seek. You may not be able to choose who you love, but you can choose who you let love grow with.

Above all else, guard your heart, for everything you do flows from it. – Proverbs 4:23

You’ve probably heard the quote: “The only thing necessary for evil to prevail is for good people to do nothing.” Well, it’s true. Because there is evil in the world, actively seeking to destroy others, and if nobody opposes those actions they will succeed. And then eventually you’ll be the target.

“Tolerance” is a big word right now, and is often held up as an absolute good—that you should always tolerate every person and every idea. But some people kill. Some take part in sex trafficking. Some promote ideas of genocide or infanticide, or argue that they should be able to sleep with whomever they feel like. God does not tolerate sin; He paid for it. Stand against evil, or one day there may be no one left to stand for you.

To fear the Lord is to hate evil; I hate pride and arrogance, evil behavior and perverse speech. Proverbs 8:13

If an outsider were to observe how you spend your time and resources, what would they end up saying your life is about? Making money? Looking good? Fantasy football? Would they say you worship God, or worship that 60-inch HD TV?

There is nothing wrong with working, or working out, or having hobbies, or being interested in the opposite sex. Those are all good things, if you don’t go overboard and make them the focus of your life. They are all secondary, the side dishes of an eternal life. God is ultimate, is the very reason you are here, and is the only one of those things that will last forever.

Keep falsehood and lies far from me; give me neither poverty nor riches, but give me only my daily bread. Otherwise, I may have too much and disown you and say, ‘Who is the Lord?’ Or I may become poor and steal, and so dishonor the name of my God. – Proverbs 30:8-9

8. Believe that this life is all about you.

You are one of seven billion people alive currently, and though you are special, so is each of the other 6,999,999,999—and the billions who have come before but are now long dead and forgotten.

You are not the star of this show. You have a cameo that will be forgotten as soon as the screen changes.

People who become the biggest thing in their world are dysfunctional. They have a skewed view. They will always end up either disappointed or delusional. And when they go, their world disappears; they don’t actually leave any impact.

If you do want to be important and make a difference, live for God. Resolve to give your life away for something bigger, and make an impact on the people around you.

Pride goes before destruction, a haughty spirit before a fall. – Proverbs 16:18

Almost nothing truly worthwhile comes quickly. It takes time and discipline to become an Olympic athlete, or to simply get in shape; to get a degree, or become a CPA, or become a great husband or wife. And any of the things you truly want long-term can be derailed by indulging yourself in the moment.

Do you want an amazing marriage, or just one amazing night? Do you want to retire in 36 years, or drive a luxury car for the next 36 months? Because in each case, choosing the latter makes it more difficult (or impossible) to have the former. Don’t choose ramen over riches.

The wise store up choice food and olive oil, but fools gulp theirs down. – Proverbs 21:20

We all have the tendency to screw up, or be blind to our own failings, or to convince ourselves that we can change on our own even though it’s never worked in the past.

That’s why God created us to live in community with others: so we can encourage each other, or point out blind spots, or have help in times of weakness.

But are you running to community and accountability, or running away from it? Some people avoid it like the plague. The only reason you avoid accountability is because you don’t want to be corrected, even though that means you then continue to do the things that ruin your life. If you really want to change, and really want to put God first every day, then do the one simple thing that makes that possible: Christ-centered community.

Whoever loves discipline loves knowledge, but whoever hates correction is stupid. – Proverbs 12:1

There you have it: how to ruin your life in 10 simple steps. Now please don’t. Instead, make these your resolutions: 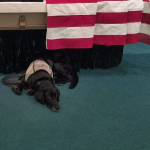 November 11, 2015
After Veteran's Death, Service Dog Tries to Comfort His Master by Jumping in the Casket
Next Post