From the Marlboro Man to Pajama Boy: The “Evolution” of Manhood?

From the Marlboro Man to Pajama Boy: The “Evolution” of Manhood? December 23, 2013 Tim Wright

Marketers know this.  They know that images imprint themselves on our minds and on the collective soul of society.  Marketing images not only try to shape society’s perceptions, but sometimes they reflect at least some truth about society.  Marketers use images to create a need for a product—choosing images that elicit our identification with the image or stir up in us the desire to emulate that image.  For example, if the image is of a man who always gets the girl simply by wearing a certain aftershave, the marketers hope that on some level I, as a man, will either see myself as that man and buy the aftershave or aspire to be that man and buy the aftershave.

A picture is worth a thousand words.  Images imprint perceptions.  So, for the fun of it, let’s look (with a bit of tongue in cheek) at two images of men, one from 2013 and one from the 1960’s, and tease out some things these images may be saying about manhood now and a generation or two ago.

(First, take a look at these two images together.  Once I put them side by side I was struck on several levels by how similar they are in terms of staging and by what each of them said about manhood.) 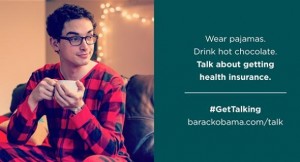 So what does this marketing image want of me?  It wants me to either say, I’m like that guy, so I, too, will use Marlboro or I want to be like that guy.  This is what a man is.  That’s the kind of man I aspire to be.  So to be like that I better start smoking Marlboro.  (I could include a snarky comment or two about smoking at this point, but that’s not the main focus of this little exercise.)

The second image is recent.  It is a part of the Obama Administration’s marketing plan for the Affordable Health Care Act.  (And yes, the irony of the two products is not lost on me.)  This particular ad is targeting Millennials.  What does it say about a man in the 21st Century?  (Here’s what I see as the dad of a Millennial son):

What does this marketing image want to say to young men?  This is what a man looks like.  This is you.  This is how you roll.  You are relaxed.  You are comfortable.  You are ready to engage with the important issues of life.  You enjoy hanging out with your friends talking about things that matter.  (In your jammies.)

Interestingly, the marketers of the first image labeled it: The Marlboro Man.  Moments after the ObamaCare ad came out society labeled the second image:  Pajama Boy.  Not Pajama Guy or Pajama Man or Pajama Young Adult but Pajama Boy.  (And the guy is how old?  Late 20’s?  30’s?)

These two images, as marketing ads, do have, I think, something to say about how we perceived manhood a generation ago and how it’s perceived today.  The marketers of Pajama Boy chose that image for a reason.  They spent lots of money to come up with that image.  On some level they believe that Millennial men will relate to that image, either saying, That’s me…I need to talk about health insurance, or, Wow, I want to be like that guy, so I better get in my jammies, grab a cup of hot chocolate, and veg out with my pals in their jammies and talk about health care.  (Sorry, I can’t help myself—the snark keeps slipping out.)

The problem with the Marlboro man was that it created the stereotype that men are isolated individuals who solve problems on their own while sucking away at a cancer-producing stick.  Marlboro men worked hard, often at the expense of relationships, died of early heart attacks, or died with the regret that they had worked so hard only to lose their souls.  On the other hand, Marlboro men were men of action.  They got things done!

The problem with Pajama Boy is that it seems to feed into the stereotype that today’s young men are still boys.  Rather than actively working hard, they are passive, sitting around in jammies drinking hot chocolate (or coffee or alcohol), solving the worlds problems through conversation rather than action.  Will they ever grow up?  Will they ever get off of the couch?  Will they ever get out of their onesies and do something to make the world a better place?  On the other hand, many of us hope that they will help solve some of the pressing issues in our country today, in part through intelligent discussions (sorely lacking in culture today).

Again, both images are extremes. (The reality is that there are as many different pictures or images of manhood as there are men in the world.  Having said that, there are some overarching biological and brain characteristics that make men men versus women.  And…Manhood is about character—it’s how a man lives his life.)  But images imprint.  Images shape and capture perception and reality.

What does Pajama Boy say about manhood to you in the 21st Century?

January 4, 2014 If I Were a Parent of a Boy...(Guest Post by Michael Gurian)
Recent Comments
21 Comments | Leave a Comment
"This is a fascinating idea. Having raised boys and a girl, I can promise you ..."
ckahrl It’s Been 50 Years Since a ..."
"Um, Jesus is already famous. This reminds me of the whole "Good News" Christian trope. ..."
Adam King The Purpose of Boys: A Podcast ..."
"So Jesus needs our help in the Name Recognition area? Really???? If he did, he ..."
Jezebel'sOlderSister The Purpose of Boys: A Podcast ..."
"Apparently men also make unevidenced generalizations based on outdated stereotypes."
Adam King Bathrooms, Male Stereotypes, and Granddaughters
Browse Our Archives
get the latest from
Evangelical
Sign up for our newsletter
POPULAR AT PATHEOS Evangelical
1