Glimpsing Truth through the Blinders of Religion

Charles Darwin knew how explosive his theories would be—that’s why he sat on them for more than twenty years. He polished them to a fine gloss, but it wasn’t until Alfred Russel Wallace sent him a paper setting out his own startlingly similar theory of natural selection that Darwin got off his already-celebrated ass and completed On the Origin of Species. Being a man of honor, Darwin invited Wallace to jointly present his paper with a summation of his own findings to the Linnean Society.

Evolution had been theorized since the Greeks, but Darwin knew that the real controversy would involve natural selection, emphasis on the natural. No gods need apply. Darwin, who once studied for the clergy, found his own faith wither the deeper he delved into the implications of natural selection.

Before The Origin of Species, atheism was itself a leap of faith. Without a credible explanation for the existence of life on earth, the God did it “theory” held the higher ground. Okay, so if God didn’t create the earth and all that inhabit it, what did?

Of course, there were plenty of alternative, basically materialistic theories, yet most of them involved God at some level. But you can’t underestimate the importance of one group of believers in the history of scientific advancement: the Deists.

Deistic theories started from the precept that God created the laws of nature, set them in motion, then went off to brush up on his golf game, take up painting, or whatever Supreme Beings do when they retire from the business of creating Life, the Universe, and Everything. I would think eternity would start to get a bit boring after a while without gainful omnipotence.

Creationists seem to have the idea that scientists accept ideas as blindly as they do. To them, scientists latch onto whatever the hip thing to believe in is, without any solid evidence to guide them. That’s ridiculous, of course, and it wasn’t even true when God was an integral part of scientific thinking.

In my last post, I related the ups and downs of the Deist Jean-Baptiste Lamarck’s theory of use-inheritance—that animals adapted to changes in their environment in their own lifetimes and passed those adaptations onto their offspring.

His theory was mercilessly mocked by his boss, the founder of paleontology, Georges Cuvier. But Cuvier was not the villain of the piece. Far from it. Still, though he wasn’t conventionally religious, transformism, as evolution was known in France, offended Cuvier’s anti-Deistic, Protestant beliefs.

Nonetheless, when Napoleon’s conquests brought Cuvier—the head of the National Museum of Natural History—a wealth of scientific booty, he gleefully dug into the odd bones and exotic biological specimens, subjecting them to meticulous morphological analysis. In a famous lecture in early April of 1796, he masterfully showed the points of difference between Asian and African elephant skeletons, proving for the first time that they were separate species. Then came the kicker: he presented a woolly mammoth fossil and pointed out the traits that diverged from the previous species. His conclusion was—wait for it—that the wooly mammoth represented an extinct species of pachyderm.

Living in the midst of what may be the sixth extinction, we take the concept of the death of species for granted. But in Cuvier’s time, the idea that a whole species could vanish from the face of the earth was a highly speculative concept that was so eighteenth century.

It was a bold claim, but then Cuvier was no shrinking violet.

Later, he identified another, more distantly-related elephant species from the US, the mastodon, then known as the “Ohio animal.” A string of new fossil species followed. He correctly identified Megatherium as a kind of extinct giant sloth. A woefully misidentified fossil was not in fact an unusually long-fingered human, but a “ptero-dactyle.”

The majority of the French scientific community soon adopted the idea of extinction and accepted the existence of fossils. Worldwide acceptance followed quickly behind. Were they playing follow the leader? Of course not. Cuvier may have been a cocksure self-promoter, but he won them over by methodically laying out persuasively empirical evidence.

Cuvier proposed that a series of catastrophic events—most likely floods—periodically wiped out entire species. After the waters receded, other animals moved in from protected areas. This neatly explained why different animals occupied later geologic layers. Humans never encountered those extinct species for the same reason they were still around—Homo sapiens had never lived where there was an extinction event.

It’s important to note that Cuvier’s objections to evolution were not entirely because it cut God out of the equation. He was fundamentally opposed to Enlightenment scientific romanticism. No airy-fairy theorizing for him; give me cold hard facts, please. At the time, there was little evidence for continual evolution. The fossil record seemed to show abrupt breaks more consistent with catastrophism. It was an issue that would later bedevil Darwinists.

Cuvier wasn’t trying to prove the biblical flood story, but others who followed him did. He was being a good scientist, going where the evidence led…up to a point. The fossils showed that extinctions had happened. Cuvier knew stratigraphy proved that different animals populated the same areas in succeeding epochs. His religious view prevented him from accepting evolution—and he felt evolutionary theories were too speculative to boot—yet the anatomist in Cuvier told him that these fossils were related to extant species, yet no longer existed. Special creations were out of the question to him, as was Linnaeus’ hybridization theory, so catastrophism was the only acceptable alternative.

Deists, on the other hand, found it easier to reconcile their observations with their beliefs. They were continually accused of being atheists—oh the horror!—but their hands-off approach to God’s creation encouraged materialistic scientific theories. But they had their own blind spots. To Deists, extinction violated their belief that God set forth a perfect set of laws that could run like clockwork on their own, freeing him to go off and soak up the sun in his Club Med in the sky.

How perfect could God’s creation be if species could vanish from the face of it? Didn’t that kind of violate the idea of God’s omnipotence?

Still, Deists nudged science ever further into a God-free zone. Uniformitarianism—the idea that nature’s laws were constant and unchanging—pushed aside catastrophism (until it crashed back into scientific thought like an asteroid from space). But once again, with the Alvarez hypothesis, empirical evidence triumphed over entrenched dogma (though factors other than the Chicxulub asteroid may have contributed to the dinosaurs’ demise).

Entrenched biases, especially when based on rigid religious beliefs, cloud scientific thinking. In the nineteenth century, many theorists found a piece of the puzzle of evolution, but couldn’t see the whole because it conflicted with their faith. In the 1940s, the New Synthesis meshed natural selection and Mendelian inheritance into a coherent theory of biology. And in the process, the foundation of the atheist movement was laid.

No, the New Synthesis said nothing about the existence of God. But in the process, these scientists showed that you don’t need to posit an all-powerful creator-god—what I call a great big genie in the sky—to explain life on earth.

A 2005 Rice University study found that only 41% of biologists believe in God. According to the researchers, they expected to find that scientists in the natural science fields would believe in higher proportions than those in the social sciences. They found it was exactly the opposite.

I for one am surprised it’s that high. A handful of scientists, like Francis Collins, may identify as evangelicals, but they now fit their beliefs to conform to the available evidence and not the other way around. 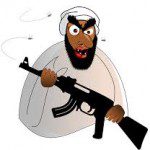