The “Sin” of Liberalism

Look at that guy sitting in the pew over there.

Who does he think he’s fooling?

Don’t you know that he is one of those bleeding heart liberals?

Doesn’t he realize we are on to him?

He doesn’t belong here, he’s not one of us.

I heard he shows up at all kinds of protests against our president.

He doesn’t believe that Trump was sent by God to make our nation great again.

He votes for Democrats.

Anyone who votes for Democrats is nothing more than a baby killer.

He says if he had his way, there would be no need for abortion.

But then he turns around and says it’s not his business what a woman decides to do with her own body.

He claims Planned Parenthood prevents more abortions than they perform.

Then he goes out and votes for candidates who are pro choice.

Can you imagine anything more sinful?

Oh, that’s not all, I’ve heard he’s a big supporter of public education.

He’s probably one of those “loser teachers” who does nothing but trash America all day to his brain-washed, heathen students.

He’s probably out there re-writing our nation’s history, making kids look at things from multiple perspectives.

I mean, get over it already, we won…am I right?

He criticizes us whenever we mention how God has been taken out of public schools.

He claims God can’t be locked out of anyplace.

He says God comes into the school with him and lots of other teachers and students every day.

How could that be if kids aren’t forced to pray?

Can you imagine anything less Christian?

Praise God our party is working hard to divert funding from public schools so people can put their children in private schools where they won’t be exposed to this indoctrination foolishness.

I also saw him post a meme on Facebook that showed he supported those uppity, ungrateful black football players who disrespect our flag by taking a knee.

They don’t know how lucky they are.

They have forgotten their place.

Why doesn’t he just join the whole lot of them and go to some other country.

Then maybe they’d appreciate how good we have it here.

Did you know he actually believes all that garbage the Lefties are spreading about climate change?

If it were up to him, we’d turn our backs on the oil and coal industry and invest in all this “renewable energy” nonsense.

Wind energy works great, but what if it’s not windy?

Their ignorance is unreal.

Everyone knows they’re not, so why should we have to?

I also happen to know that he isn’t against gays, can you believe it?

He says he isn’t even sure it’s a sin.

Then he says even if it was a sin, it’s no different from any other sin.

How can anyone be led so far astray?

He acts like if Jesus was here today, he wouldn’t shun the gays.

And here he sits in church as if he belonged here.

Someone says he goes on and on about the problem of “income inequality”.

Anyone knows that the rich earned their money because they are just better and smarter.

Now he supports politicians who want to tax them more just to help people who aren’t smart or good enough to get it on their own.

That’s socialism and there’s certainly nothing Christian about that.

Yet, every single time there’s some nut job who goes out and shoots a bunch of people, there he is back on his social media soapbox talking about “sensible gun control”.

I get so sick of hearing that.

Doesn’t he realize that Cain killed Abel with a rock?

Doesn’t he know that we have a heart problem and not a gun problem.

If you ask me, every good Christian ought to have an AK-47 for the day when the liberals like him finally start to wage their all out war on us.

Oh, and he goes on and on about how we “don’t have a national emergency” and we “don’t need a wall”.

What a bunch of bunk!

Doesn’t he know Heaven has walls?

I’ll bet he keeps his door locked at night—what’s that tell you?

He criticizes the president for separating families at the border and “caging children”.

Well, what are we supposed to do, welcome them?

If they’d simply wait their turn and come in legally, they wouldn’t have to be separated.

He’d say they have to wait years and years, but I don’t believe a word of that.

At any rate, even if that were so, if they are Christians, God would protect them.

I hear he welcomes diversity.

We’re going to end up being run by a bunch of Jews, Muslims, women, and God knows who else if we don’t try to stop this madness.

Just look what a mess the new House of Representatives is.

Women and minorities everywhere you look.

That’s not the America I know.

Women shouldn’t be leaders in government anymore than they should in church.

Maybe worst of all, that guy doesn’t think this is supposed to be a Christian nation.

He spouts all this nonsense about the separation of church and state as if it’s in the Constitution.

I don’t know who that guy thinks he’s kidding.

He sits in here and acts like he were a true Christian.

I’ll bet if Jesus walked in here, he’d throw that Commie right out of here. 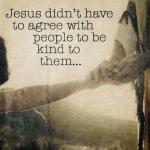 February 19, 2019 Good Works Are Not an Excuse to Deny Rights to Others
Recent Comments
0 | Leave a Comment
Browse Our Archives
Follow Us!