Faith in the Public School Classroom: Dispelling the Myths 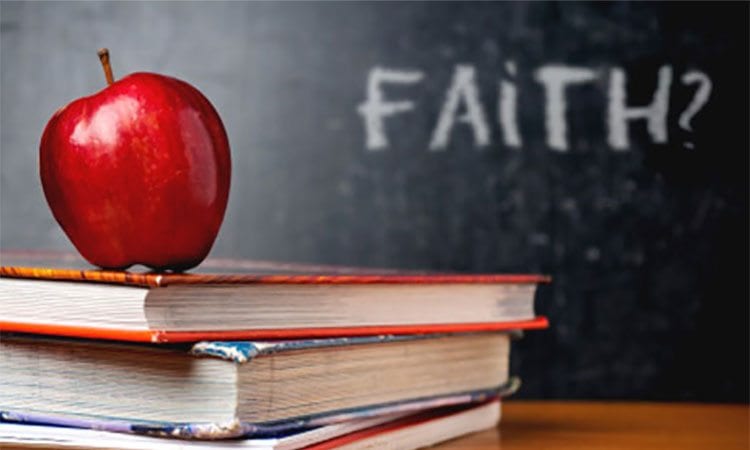 For many years now, I’ve been waging a quiet and subtle battle against a persistent myth about public education. There is a wide-spread belief among more conservative Christians that God has somehow been “locked out” of public schools and that the moment we allowed that to happen, our society began to become morally bankrupt. I’ve seen dozens of memes circulating around social media since it’s inception about how prayer isn’t allowed in public schools–how they stopped saying the Pledge of Allegiance–about how students can’t have bibles in school but inmates in prison can–about how Godless teachers are indoctrinating students with an anti-Christian agenda–I’ll bet you’ve seen them too. These things have been spread widely since social media took off and I still see them spread by social media friends of mine on a weekly basis. Each time I see one of these memes shared by a more conservative friend, I will leave a comment with a gentle correction. My friends will often reply back with something like, “well, that’s good to hear,” but they inevitably leave the misleading meme up. That confounds me. So, I’m going to try to give you a real and honest picture of what faith actually looks like in public schools. I can assure you that God is not locked out of public schools. After all, if that were true, that would paint a very weak picture of God, would it not? 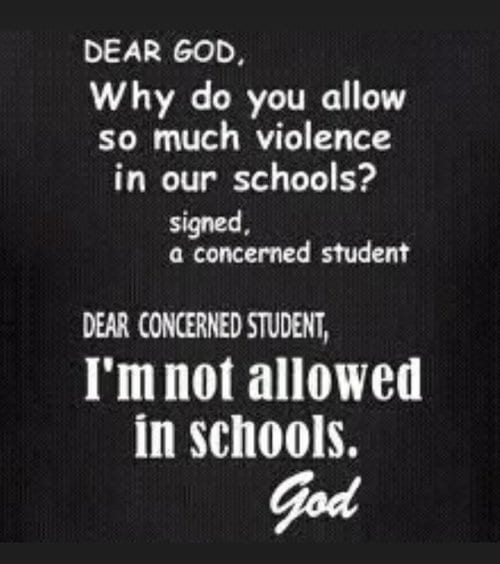 I’ve seen the message in the above meme in some form or another on a very regular basis for many years. Every time I see it, I want to scream at the person sharing it, how weak is your God that he can be kept out of a public school? The whole notion is ridiculous and shows a complete ignorance of the Constitution and reality. Let me set the record straight right here and now. God is present in every public school in America. He comes in with many students, teachers, administrators, teachers aides, custodians, and cafeteria workers. If you claim God is locked out, then not only do you not understand public schools, you don’t even understand your own religion and your own God. If that is the case, it is you who are placing great limitations on God, not public schools. But that isn’t what you’re really claiming, is it, conservative Christian? You aren’t really trying to say that your Christian God is being locked out of public schools, you are actually upset that other religions are allowed into them. I can sit here and tell you until I’m blue in the face that kids can pray in school whenever they want to–that I have a Bible among the books on my desk–that we say the Pledge every morning (including the line “under God”)–that after we say the Pledge, we observe a moment of silence (a perfect time to start one’s day with a prayer)–that we teach and model Christian principles of loving our neighbor, being kind, being empathetic, etc. I could tell you all of that and you might say, “well, I’m glad to hear it.” But you won’t stop spreading the lies because all of that isn’t really good enough for you. It doesn’t go nearly far enough for you, does it? Just be honest and admit that what you really want is to go against the Constitution. You want the Americanized, nationalistic version of the Christian God to be the ONLY version of God allowed in schools. You want pubic schools to endorse, promote, and force your version of faith on all students to the exclusion of any other faiths. That is what you really want, isn’t it, conservative Christian?

To that I say, you can have it as you wish, but you’re going to have to send your student to a private Christian school. Because of the Establishment Clause of the Constitution, you’re never going to get what you really want from public schools. The only way you’ll ever accomplish that is to eliminate the 1st Amendment and I’ll just go ahead and warn you, there is a lot of stuff in there that you’d sorely miss if you ever got that done.

Every year, I have a lot of Catholic and Protestant Christian students. I also have a good number of Islamic students as well as a few followers of Judaism, Buddhism, and Hinduism. In addition to those, I always have a considerable amount of Atheist or Agnostic students. This year, I even have one student who identifies as Pastafarian. My job as their teacher is to provide them with an equal opportunity to learn U.S. history. Every single one of my students is free to say a prayer to whatever god they choose at any time, so long as it doesn’t impede the learning of the other students. My job as a Christian teacher is to love all my students unconditionally. At some point in each year, my students learn that I am a Christian. It always comes up either in a lesson I’m teaching or they’ll just inevitably ask me. I don’t try to hide my faith from my students but I certainly don’t proselytize to them because that would be illegal. However, if I’m doing my job as a teacher and as a Christian, they should see Christ in the way I treat them. That’s the extent of what I can and should do when it comes to practicing my faith in a public school. That should be good enough for you, conservative Christian, but it never seems to be. If you understood the Constitution, you’d understand that the following meme is a much more accurate depiction of how you really come off when you demand “God be allowed back in public schools.” 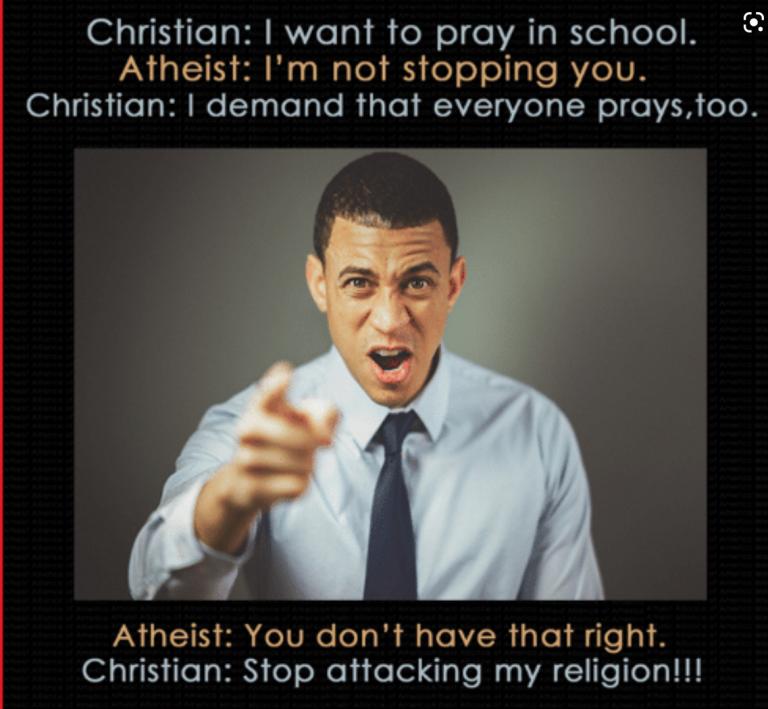 Our nation is becoming more diverse by the day. So, too, are our public schools. I know that frightens you, conservative Christian. You need to accept that there is nothing you can do to change that. You need to embrace it. Stop claiming that your faith is being attacked simply because people of other faiths have the same rights as you because, if you truly understood the Constitution and what it means to be an American, you’d finally understand that is the quintessential essence of what makes this country great.

November 18, 2019
The Biggest Misconception in Our Nation Fuels Most of Our Fires
Next Post