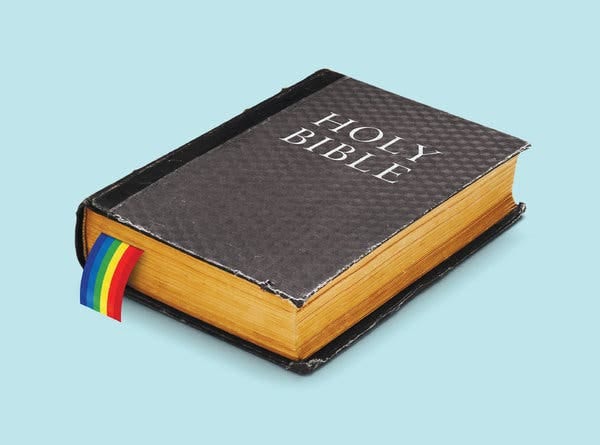 For years, I’ve struggled with this. We are told that we are all created in God’s image. We are also told that the Bible clearly condemns sexual relations between members of the same sex. These two messages have clashed in my brain since I’ve been old enough to understand them. As a teacher of middle school aged children, I know that many people are born with an attraction to members of the same sex. I have seen it first hand more times than I can count. Given this fact, how/why would God create someone so clearly doomed to a “sinful” life?  For a long time, I considered myself an agnostic when it came to whether or not homosexuality is a sin. In other words, I copped out and basically said it’s not for me to say one way or another. But as I’ve done more research, I have begun to see things differently. Recently, I read an article at Forgeonline.org that has completely changed the narrative about this in my mind. In that article, I learned that the concept of “homosexuality” as we have come to know it did not appear in any Bible translation until the year 1946. That was in the RSV version. The reason for that change is based in an American anti-gay agenda. Suddenly, this topic which had been so muddied in my mind for so long began to become much clearer.

The article I referenced above contains an interview with Ed Oxford. Mr. Oxford has been a part of a research team that has been working diligently to discover when and why the word homosexual was put into the Bible. Their findings are remarkable. Ed and his team gathered old Bibles in many different European languages dating back to the time of the Reformation more than 500 years ago. The whole thing hinges on the original Greek word, arsenokoitai. In most modern biblical translations, that word is translated to mean homosexual. That was not the case originally. Originally, arsenokoitai actually meant “molesters of young boys.”

“It turns out that the ancient world encouraged a system whereby young boys (8-12 years old) were coupled by older men. Ancient Greek documents show us how even parents utilized this abusive system to help their sons advance in society. So for most of history, most translations thought these verses were obviously referring to pederasty [sexual activity between a man and a young boy], not homosexuality.”

Martin Luther’s original German translation from 1534 used the word knabenschander. Knaben means boy, schander means molester. The word knabenschander is used in the two verses that appear to condemn homosexual acts in Leviticus (18:22 and 20:13), and in 1 Timothy 1:10 in German Bible translations from Martin Luther’s original until 1983. In 1983, the translation suddenly changed in Germany to mean homosexuals instead of molesters of young boys. How did it happen?

“…it turns out that the [American] company, Biblica, who owns the NIV version, paid for this 1983 German version. Thus it was Americans who paid for it! In 1983 Germany didn’t have enough of a Christian population to warrant the cost of a new Bible translation, because it’s not cheap. So an American company paid for it and influenced the decision, resulting in the word homosexual entering the German Bible for the first time in history.”

In America, the topic of homosexuality as a sin is hotly debated. Fundamentalist Christians point to these few references in the Bible and talk about how the Bible is “God breathed” and infallible. After reading the truth behind the story of biblical translations, my question to the fundamentalists is this: Why was the original translation not infallible? Why did you work so hard to alter the words that “God breathed?”

This information probably will fall upon deaf ears. But my prayer is that it causes at least some Christians to think and pray about how they see their LGBTQ brothers and sisters. Perhaps they can try to see them as their creator sees them and, indeed, created them.

November 30, 2019
Faith in the Public School Classroom: Dispelling the Myths
Next Post

December 9, 2019 Conservative Christians, It's Time to Step Up: Where are Your Good Samaritans?
Recent Comments
0 | Leave a Comment
Browse Our Archives
Related posts from Empathy Mining