My right to be offended by your existence trumps your right to exist June 29, 2012 Fred Clark 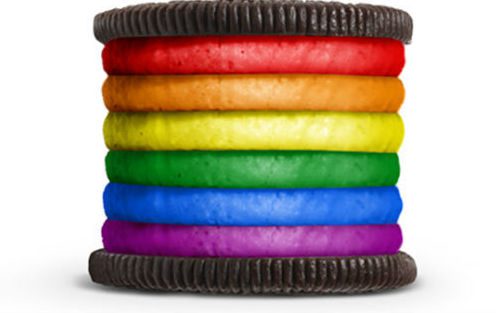 What does that even mean? To take a political stand is to stand against something, but what, exactly, is the opposing position of the alleged “political stance” of the rainbow Oreo? Does Dreher think Nabisco ought to have produced an Oreo that “embraces gay shame” instead?

No, no, no, he would protest — he simply wants his Oreos neutral, to take no “political stance” in the controversy between pride and shame. WTF?

Again, try to imagine anyone saying such a thing about St. Patrick’s Day, or about your local Polish festival.

Every year, your local newspaper runs a photo of the mayor, grinning broadly over a plate of kielbasa served by a grandmother at the tent from Our Lady of Czestochowa. The mayor, of course, is a politician and he has political reasons for celebrating Polish heritage at the festival. He wants the Polish community’s votes in the next election.

But while the mayor’s joining in the celebration is in some ways political, that doesn’t mean that his presence at the festival constitutes his taking a particular “political stance.” To suggest that his attendance there amounts to “taking a political stance” would be weird and kind of creepy.

What would you think if someone argued that the mayor should have stayed “neutral” — keeping apart from the political fray of polkas and pirogies?

Such “neutrality” wouldn’t seem neutral at all. It would seem anti-Polish. It would lead you to suspect that the person calling for this neutrality on the “political stance” of the Polish festival harbored some deep-seated hatred toward Polish people.

I don’t think Rod Dreher wanted to suggest all of that in his tweet about rainbow Oreos, but there’s no other way to read what he’s saying there. To “embrace gay pride” is to “take a political stance,” he writes, meaning that LGBT people are existentially controversial. That their legitimacy is legitimately disputed. That their right to participate in society is an unsettled question.

The cookie endorses no candidate, advocates no piece of pending legislation, favors no political party. But it reminds others that LGBT people exist , and that is perceived as a horrific insult by those who would prefer they didn’t.

That preference, Dreher is saying, is their right. Those who embrace gay shame have a right not to be confronted by such offensive reminders of that which they would prefer wasn’t so. And that right, Dreher is saying, must be presumed to be valid, legitimate and undisputed in a way that LGBT people’s right to participate in society cannot be.

It boils down to something like “My right to be offended by your existence trumps your right to exist.” That’s a pretty dark and creepy place to wind up at in response to such a fabulously festive cookie.

June 29, 2012 NRA: Returning the rental car
Recent Comments
105 Comments | Leave a Comment
Browse Our Archives
get the latest from
slacktivist
Sign up for our newsletter
POPULAR AT PATHEOS Progressive Christian
1