Black-and-white photographs clipped from newspapers call to mind the distant past.

That’s particularly true when the content of the photo seems to show something from a bygone, shameful era in American history. For those of us born after the Civil Rights movement, the idea of something like White Citizens Councils seems like an ugly relic from the middle part of the last century. 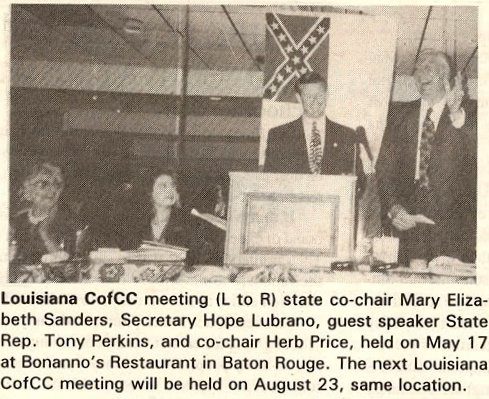 That’s the Liar Tony Perkins there, smiling at the podium during a May 2001 meeting of the Council of Conservative Citizens in Baton Rouge.

The White Citizens Councils still exist, they’ve just rebranded, slightly, changing their name but not their agenda. They remain committed to white nationalism and white separatism. That’s who they are — the essential, unmistakable core of who they are, why they are, and what they are.

What has the Liar Tony Perkins been up to since chuckling with anti-miscegenation activists in 2001?

Well, it seems he’s been lying. A lot.

And, as John Aravosis explains, that habitual dishonesty is “Why the Family Research Council is a hate group“:

And there were a lot of them. At the time, FRC’s list of footnotes could be nearly as long as the written part of the document itself.

What did I find when I went through the original sources cited in the footnotes? I found that nearly every single footnote was a lie. Not a lie in the conventional sense — meaning, they didn’t make up a source that didn’t exist. Rather, they did things like quoting a damning opinion from a judge in a court case without mention that the judge was in the minority, that the gays had actually won the case they were citing.

Or they’d quote a study with a hideous conclusion about gays and lesbians, only for you to realize later that the actual quote in the study was rather benign — instead, FRC “forgot” to put an end-quotation mark on the quote, added an ellipse, and then put their own damning conclusion.

…  These are not honest people simply expressing a contrarian view of politics, like Democrats and Republicans do every day in Washington.

And the FRC is branching out. Perkins has hired a new attack dog — former Army Lt. Gen. Jerry Boykin, a man rebuked by former President George W. Bush for his anti-Muslim hate-speech. The same thing Bush criticized Boykin for is what made Boykin attractive to the FRC: He’s willing to spew innumerable hateful lies about anyone he considers his enemy.