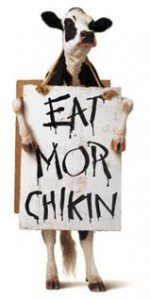 Now the man knew his wife Eve, and she conceived and bore Cain, saying, “I have produced a man with the help of the Lord.” Next she bore his brother Abel. Now Abel was a keeper of sheep, and Cain a tiller of the ground. In the course of time Cain brought to the Lord an offering of the fruit of the ground, and Abel for his part brought of the firstlings of his flock, their fat portions. And the Lord had regard for Abel and his offering, but for Cain and his offering he had no regard. So Cain was very angry, and his countenance fell. The Lord said to Cain, “Why are you angry, and why has your countenance fallen? If you do well, will you not be accepted? And if you do not do well, sin is lurking at the door; its desire is for you, but you must master it.”

October 14, 2012
'You have something worth saying' -- Bonfire blegging
Next Post

October 15, 2012 Your fate is not written in the stars
Recent Comments
18 Comments | Leave a Comment
Browse Our Archives
Follow Us!