Chick-fil-A’s Biblical Family of the Day

When the Lord first spoke through Hosea, the Lord said to Hosea, “Go, take for yourself a wife of whoredom and have children of whoredom, for the land commits great whoredom by forsaking the Lord.” So he went and took Gomer daughter of Diblaim, and she conceived and bore him a son. 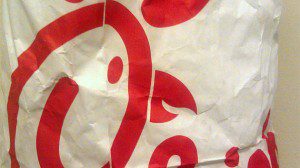 And the Lord said to him, “Name him Jezreel; for in a little while I will punish the house of Jehu for the blood of Jezreel, and I will put an end to the kingdom of the house of Israel. On that day I will break the bow of Israel in the valley of Jezreel.”

When she had weaned Lo-ruhamah, she conceived and bore a son. Then the Lord said, “Name him Lo-ammi, for you are not my people and I am not your God.”