A tolerable response to intolerable sophistry

Here’s a terrific video from Minute Physics (via), in which they take a silly question and respond with far more seriousness, and creativity, than it deserves.

“What happens if an immovable object meets an unstoppable force?”

The conclusion, if you can’t watch the video linked and embedded above, is that “an immovable object” and “an unstoppable force,” if they’re to be understood to mean anything real at all, “are really just the same.”

And, abiding by the semantic silliness of the riddle, if they were to collide, “they must pass right through each other with no effect on each other at all.” 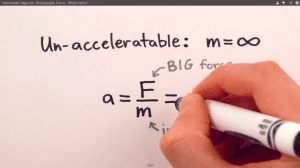 The fun thing about this is that they cheerfully take the riddle at face value — as though it were an actual, honest question about objects and forces rather than just a pretzeled bit of word-play, in which opposite adjectives are employed to create a linguistic paradox that doesn’t correspond to anything real. The question isn’t about physics, the question is about language and the way that language can be played with to destroy meaning rather than to convey it.

All of which is why I’m bookmarking the link for this video as my new response for the routine right-wing harrumph of “Oh yeah? Well if you’re so tolerant, how come you won’t tolerate my intolerance?”

The semantic game of immovable object vs. unstoppable force is intended as a game — as an impish bit of wordplay that most people recognize is only that and not an actual attempt to say anything meaningful about anything real.

The sad thing about the “I demand you tolerate my intolerance!” harrumphing is that those folks don’t seem to realize that what they’re saying is just a semantic game. They’ve gotten stuck inside their own linguistic pretzel and imagine it still communicates some idea or corresponds to some reality rather than just demonstrating the pliability and liabilities of language.

Which makes me wish that an omnipotent God would make a rock so heavy that even he couldn’t lift it, then drop it on them. But instead, I’ll just refer them to this video.

January 29, 2013
A Simple Suggestion to Help Phase Out All-Male Panels at [Church] Conferences
Next Post