Martin Luther King Jr.: ‘I am happy to be the recipient of the Margaret Sanger Award’

Martin Luther King Jr.: ‘I am happy to be the recipient of the Margaret Sanger Award’ January 30, 2013 Fred Clark

The co-optation of King is frequently absurd, but not always. If you’re a pacifist follower of Jesus challenging entrenched power with courageous nonviolent action, then, yes, you get to say you’re following King’s legacy. If you’re a union organizer, a civil rights advocate, a tireless friend of the poor and the powerless, then go ahead and claim that you’re marching in the footsteps of MLK.

But as James W. McCarty III noted last week, King’s legacy can’t be claimed by those he opposed — by those who represent the very things he battled against. Like, for example, the nuclear Global Strike team of the U.S. Air Force:

They have declared that, because of the racial and religious diversity of the Air Force, King “would be proud to see our Global Strike team [part of the US nuclear defense system] … standing side-by-side ensuring the most powerful weapons in the U.S. arsenal remain the credible bedrock of our national defense…”

I’m sure that Martin Luther King Jr. would be pleased to see a commitment to racial and religious diversity in any institution, but that was not his only message for those who wield “the most powerful weapons in the U.S. arsenal” — weapons, McCarty notes, that King wanted to see eradicated. 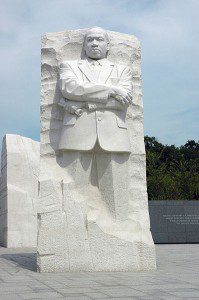 And that makes this post from Christ and Pop Culture just as absurd as the MLK Day press release from the Global Strike team.

“Words are inadequate for me to say how honored I was to be the recipient of the Margaret Sanger Award,” Martin Luther King Jr. wrote to the Planned Parenthood Federation in 1966. “This award will remain among my most cherished possessions.”

King’s acceptance speech for that award, “Family Planning — A Special and Urgent Concern,” makes it very clear that, no, you may not claim to be an heir to King’s moral vision while fighting against access to contraception as a component of universal health care.

If you’re horrified by the prospect of a mandate requiring no co-pays for preventive health care for women, then it’s really, really foolish to invoke Martin Luther King Jr. as an inspiration or an ally. Oppose his legacy if you must, but don’t pretend he’d be happy about it.

Christianity Is Not Under Attack, It is under...
A few days ago, my daughter sent me a Tic Toc video...
view all Progressive Christian blogs
What Are Your Thoughts?leave a comment
Copyright 2008-2021, Patheos. All rights reserved.