‘Dracula’ and the Bible

NBC television has a new 10-episode miniseries this fall called Dracula. It’s based on the famous vampire from Bram Stoker’s 1897 gothic novel.

I’ve never read Stoker’s novel. I’m not sure I could. I’m not sure any of us could. It’s still in print and readily available — you can download a free ebook version here, or read it online if you like. But those of us sitting here, in 2013, will still have a very hard time reaching back to 1897 to read the book as Stoker intended it to be read or as its first readers read it at the turn of the last century. 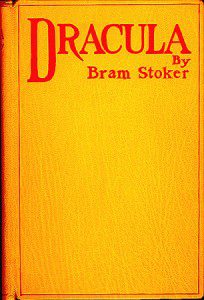 Stoker’s language and style may seem a bit archaic, but that’s not the main problem. The main problem is that Stoker introduced symbols and characters and creatures that have, for more than a century, been redefined, reinterpreted and re-presented dozens of times over. If I go back to the original book and encounter those symbols, I can’t help but bring with me all the new meanings that have attached to them over the intervening years.

When Stoker wrote of “Dracula” and “vampires” and “Transylvania” he did not and could not have meant all the things that I cannot help but take those words to mean, to imply, to connote. It would require enormous effort on my part — not just willpower, but extensive research and scholarship — to encounter Stoker’s words and symbols without all that extra and extraneous meaning those words and symbols have since collected and accreted. I’m not sure that project could ever be wholly successful.

The cover of the first edition of the book shown here has just four words on it, but it’s immensely difficult to read even those four words without importing and imposing a vast amount of information they don’t actually contain. The “Dracula” I already know is not the same thing as the “Dracula by Bram Stoker.” My Dracula includes a thousand things Bram Stoker never dreamed of — Bela Lugosi and the Universal movies, Ed Wood and Abbot and Costello, Buffy, Twilight, The Lost Boys, Sesame Street, Count Chocula, Nosferatu, Willem Dafoe, Barnabas Collins, Salem’s Lot, True Blood, Louis and Lestat, and dozens of other things I’ve forgotten reading or watching even though their influence lingers, unacknowledged.

Here are the opening paragraphs of Stoker’s novel:

3 May. Bistritz.—Left Munich at 8:35 P. M., on 1st May, arriving at Vienna early next morning; should have arrived at 6:46, but train was an hour late. Buda-Pesth seems a wonderful place, from the glimpse which I got of it from the train and the little I could walk through the streets. I feared to go very far from the station, as we had arrived late and would start as near the correct time as possible. The impression I had was that we were leaving the West and entering the East; the most western of splendid bridges over the Danube, which is here of noble width and depth, took us among the traditions of Turkish rule.

We left in pretty good time, and came after nightfall to Klausenburgh. Here I stopped for the night at the Hotel Royale. I had for dinner, or rather supper, a chicken done up some way with red pepper, which was very good but thirsty. (Mem., get recipe for Mina.) I asked the waiter, and he said it was called “paprika hendl,” and that, as it was a national dish, I should be able to get it anywhere along the Carpathians. I found my smattering of German very useful here; indeed, I don’t know how I should be able to get on without it.

Having had some time at my disposal when in London, I had visited the British Museum, and made search among the books and maps in the library regarding Transylvania; it had struck me that some foreknowledge of the country could hardly fail to have some importance in dealing with a nobleman of that country. I find that the district he named is in the extreme east of the country, just on the borders of three states, Transylvania, Moldavia and Bukovina, in the midst of the Carpathian mountains; one of the wildest and least known portions of Europe. I was not able to light on any map or work giving the exact locality of the Castle Dracula, as there are no maps of this country as yet to compare with our own Ordnance Survey maps; but I found that Bistritz, the post town named by Count Dracula, is a fairly well-known place. I shall enter here some of my notes, as they may refresh my memory when I talk over my travels with Mina.

In the population of Transylvania there are four distinct nationalities: Saxons in the South, and mixed with them the Wallachs, who are the descendants of the Dacians; Magyars in the West, and Szekelys in the East and North. I am going among the latter, who claim to be descended from Attila and the Huns. This may be so, for when the Magyars conquered the country in the eleventh century they found the Huns settled in it. I read that every known superstition in the world is gathered into the horseshoe of the Carpathians, as if it were the centre of some sort of imaginative whirlpool; if so my stay may be very interesting. (Mem., I must ask the Count all about them.)

That’s written as a journal entry by Jonathan Harker — a character portrayed and revisited so many times that he has his own IMDB page with dozens of entries. It’s not easy to encounter him there in Stoker’s novel without some of those many portrayals reshaping what I read.

Stoker’s original story is, for us today, at the center of some sort of imaginative whirlpool. And so it is, for us, an enormous challenge to encounter that story itself — as itself — without being influenced by all the allusions and accretions swirling around it, on top of it, under it and through it.

One approach would be to attempt a faithful adaptation — painstakingly separating the original tale from all the later cultural additions and reinterpretations of it. That’s a tricky business, first of all because it’s hard. “Faithful adaptation” may be an oxymoron. One can be faithful, or one can adapt, but it may not always be possible to do both at once. Francis Ford Coppola’s Bram Stoker’s Dracula took this approach, but as that awkward double attribution suggests, that film didn’t so much give us Stoker’s Dracula as it did Coppola’s Stoker.

Another problem with the “faithful adaptation” approach is that it tends to upset some of Dracula’s fans. Their idea of what’s “canonical” may be only a loosely overlapping Venn diagram with Stoker’s original canon. Cut away all of the extraneous later additions that have attached themselves over time to the original story and you’ll be cutting away many fans’ favorite parts. If Jonathan Rhys Myers is more like Stoker’s Dracula than like Bela Lugosi, that’s bound to disappoint some viewers who wanted to see Lugosi, or to upset others for whom Gary Oldman represents the “authentic” Count. Fans may be frustrated if Oliver Jackson-Cohen’s Jonathan Harker turns out to be nothing like Keanu Reeves. (OK, yes, that last bit is a joke.)

And so a second approach would be to set aside the difficult project of separating the original from the expanded cultural phenomenon. Instead of trying to faithfully adapt Bram Stoker’s Dracula, the creators of the show might choose to tell a story about our Dracula — the character we all know or think we know today, complete with all of the additions and subtractions, elaborations, amendments and emendations. This approach is easier, but no less complicated and no less fraught with the danger of disappointing the fans because it requires a host of choices about which parts of “our” Dracula to keep and which to cast aside.

These two approaches seem almost like opposites. The first says that the story is what the text says, and that our task is thus to cut away and to cut through everything else to try to get back to the pure, unspoiled essence of the original, authoritative text. The second says that the story is ours, not just Stoker’s, and so Stoker is just one of many participants in a community. In the second approach, then, our task becomes sorting through all the many contributions from the many voices in that community to locate at the center that which seems most true to our story.

In practice, though, these two very different approaches are never quite so abstract and separate as they may seem. The unspoiled original and authoritative text will always be determined and interpreted by the community that belongs to it and to which it belongs. It’s words and symbols and characters can never mean anything wholly separate from what they mean to that community. And Stoker’s voice will always have a privileged place in that community of voices, his original words will always be there at the center, no matter how large the imaginative whirlpool swirling around them grows to be.

And but so anyway, I titled this post “‘Dracula’ and the Bible,” and now I’ve gone on and on about the Bible without hardly even mentioning Dracula. Sorry about that.