Looking for the answer in Orion: More Mondegreenage

Looking for the answer in Orion: More Mondegreenage May 15, 2014 Fred Clark

Mondegreens — misheard song lyrics — are great fun, in part, because confession is good for the soul. They’re one of the few forms of confusion and misapprehension we can admit to without great risk or fear of rejection.

We humans need to be fully loved, and we’re all aware that one cannot be fully loved unless one is fully known. But we’re all at least a little bit scared that if we were to be fully revealed, and thus fully known, it would prevent others from loving us. That’s why we’re often naked in anxiety dreams. That’s why closets are prisons. And that’s also why church is often marked by defensive pretense more than by the candid solidarity of a body of sinners.

“When They Really Get to Know You They Will Run,” David Bazan wrote, and most people, I think, recognize what he was getting at there. 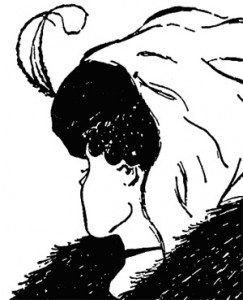 So when we get to a relatively risk-free subject like mondegreens, we enjoy the chance to confess our confusions and to have them accepted with laughter, endearment and something like membership or belonging. It’s like a chance to dip our toes into that intimidating pool of self-revelation that someday we hope to be brave enough to plunge into completely.

Talking about these slips of the ear with some friends once, one friend said that for the longest time she hated Billy Joel’s “Pressure” and couldn’t understand how it was allowed to be played on the radio. It turned out she’d misunderstood the line “loaded guns in your face” as “loads of …,” well, something else in your face — something that, no, you really would not be allowed to say on the radio.

“What does that say about me?” she asked, “That that is where my brain went?” We all jokingly chided her “perversity,” and the can-you-top-this? conversation about mangled lyrics continued even though none of us could top that one, which we all celebrated as the best/worst of the bunch. And if you’d watched that whole conversation take place you might have missed what just happened, and what was happening throughout, which was a group of friends tentatively testing the waters of admission and acceptance — a group of humans expressing their human need to be fully known so that they might be, in turn, fully loved.

We can do that when the subject is something relatively safe, like mondegreens. We openly, eagerly share that we have made those kinds of harmless mistakes or misapprehensions. Even if we accept the Freudian notion that slips of the ear, like slips of the tongue, can reveal underlying preferences and predispositions, we’re still not too worried that admitting to such slips will cause others to reject us.

But when the subject is something more substantial than the lyrics to a pop song, such confession is a riskier business — it’s far more fraught with the potential for actual rejection. Jimmy Fallon tosses out the Twitter challenge of #MisheardLyrics and we all think, “Ooh, fun! I’ve got a good one!” But we wouldn’t respond the same way if it were #MisjudgedStrangers. That wouldn’t have us lining up to share our personal examples of times when we had mistakenly prejudged others, even though such incidents involve a similar process of “bottom-up” situational ambiguity being mistakenly resolved via choices determined by our “top-down” biases and preferences.

That creates another problem. Because we’re more open to admit to our misapprehension of song lyrics, we’re also more open to correcting those misapprehensions. That’s somewhat useful, but in the big picture it doesn’t matter a whole lot whether or not we all know the correct lyrics to “Purple Haze” or even “The Star Spangled Banner.” We may spare ourselves some minor embarrassment by refraining from speaking of the “donzerly light” as though that were a real word, but that doesn’t make a huge difference in our lives or in the lives of those around us. Avoiding the bungling of song lyrics doesn’t help us to do justly, love mercy or walk humbly with our God.

When we’re sharing mondegreens, we often say things like “For years I thought …” or “For the longest time, I was sure that …” That’s how it works. These things get settled in our brains and they remain that way until something unsettles them. We don’t question such mistakes because we don’t realize they are mistakes.

And we all make mistakes, all the time. We cheerfully admit to that when the subject is something safe and insubstantial, like song lyrics, but the more serious and substantial the subject, the more we begin to pretend otherwise.

This is part of what I’m trying to get at by comparing mondegreens to the way we interpret and misinterpret the Bible. And it’s why I want to stress the “bottom-up” factors involved in our misinterpretations. It’s important to start there, I think, with the reminder that the Bible is an inherently, unavoidably ambiguous text. That inherent ambiguity provides the space that can allow our interpretive mondegreens to occur. Acknowledging that ambiguity also ought to provide space for us to accept and admit that we are capable of — and prone to — misinterpreting it, even when we approach it with the best intentions we are capable of intending.

The battle over the Bible gets so nasty and personal not just because the stakes are high, but because we approach the Bible with the false pretense that it is an unambiguous text, the clear meaning of which (i.e., our own interpretation) could only be missed by someone willfully and purposefully determined to misread it. That idea means leaping from “we disagree over the meaning of this passage” to “you’re a bad person openly rebelling against the obvious meaning of this unambiguous passage.” (This is further complicated by that fact that we humans are all, also, capable of being bad people who do sometimes openly rebel against the apparent meaning of passages which, while somewhat ambiguous, may not be as elastic as we’d like to pretend.)

Denying the reality of these “bottom-up” factors in biblical interpretation also leads us to deny the reality of the “top-down” factors — the ways in which we choose between potential meanings based on our own biases, preferences, prejudices and predispositions. Denying that such preferences and biases play any role in biblical interpretation means that we will never be able to correct for them, to evaluate them, or to get past them.

P.S. The title of this post comes from my own long-time misapprehension of the lyrics to “The Things We Do For Love,” by 10cc. The actual lyric is, of course, “Looking for the answer in her eyes.” That’s lovely, too, but I think I may still prefer the mondegreen.

May 14, 2014
There's a bathroom on the right: Mondegreens and the Bible
Next Post

May 15, 2014 'Biblically correct in every way'
Recent Comments
0 | Leave a Comment
Browse Our Archives
get the latest from
slacktivist
Sign up for our newsletter
POPULAR AT PATHEOS Progressive Christian
1