I’m guessing it’s named after the other Philip

“So who were Saints Philip and James?” The question involved a local Catholic parish, and I couldn’t be sure of the answer.

The problem, you see, is that there’s more than one possibility for both of those names. Two of Jesus’ 12 disciples — both now regarded as saints — were named James. And St. Philip could refer to another of those apostles or, alternatively, to Philip the Evangelist, a biblical saint we meet later in the book of Acts. That book also includes a few stories about James the Just, or James of Jerusalem, who may be a different James than either of the apostles.

The other Philip and the other James from the book of Acts both have bigger roles in that book than the apostles they share names with, yet I’m still pretty sure that neither of those saints is one of the namesakes for this local church.

James the Just is unlikely due to his other distinction — being James the brother of Jesus (and maybe also the author of the New Testament epistle of James). The idea that James is the brother of Jesus comes from the text itself, which calls him that, but that’s not how our Catholic friends like to think of him. He’s Jesus’ cousin, they insist. And while they’re quite happy to explain at great length how they support that conclusion despite the text repeatedly saying “brother,” instead, they’d be even happier just to avoid the subject altogether. All of which means that there don’t tend to be as many parishes and such named after that James as after the other one(s).

As for Philip the Evangelist, well, he’s even more troublesome. He shows up as a character in only four stories in the book of Acts, and every one of those stories spells trouble. Each of them includes something that might be a bit discomfiting to an upright American Christian. So even though Philip may be canonized as a saint due to his appearance there in the Bible, anyone who acts like he acted would likely get in trouble with the powers that be in many churches these days. 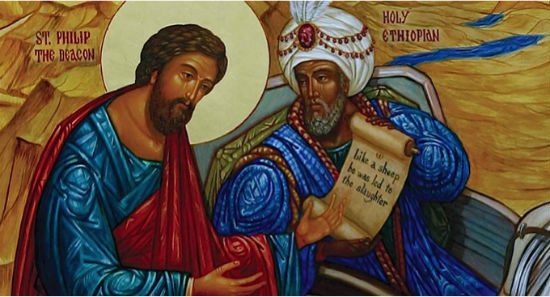 The first time we meet Philip he’s just a name in a list. He’s one of the seven deacons chosen to distribute food to widows among the Greek-speaking widows.

The appointing of those deacons was a Good Thing. It was an admirable step taken to correct a serious problem. But the existence of that problem is disheartening. This is just a short time after Pentecost — the radically inclusive miraculous outpouring of the Holy Spirit upon people from every nation. The young not-yet-a-church church is earnestly trying to live up to Jesus’ teachings and to what they’ve just learned at Pentecost, but old habits die hard.

They were sharing all their wealth and using it to feed the poor, which was very cool. But, alas, it turned out that some widows weren’t getting fed. And this neglect wasn’t random — the Hebrew-speaking widows were being taken care of, but the Greek-speaking widows were not. Never underestimate the human capacity for drawing lines and boundaries, even within what was then still a mostly homogenous community.

And so Philip and the other deacons were appointed to carry out an affirmative action program aiming to correct that unfair exclusion. These were the first deacons. So from its very earliest days, the church has sought to correct the discrimination, neglect and prejudice that have also been present within the church from its very earliest days. That story of the deacons is thus simultaneously something to be proud of and something to be ashamed of.

Philip took his include-the-excluded commission very seriously, so the next time we hear from him he’s in Samaria. He’s at a sorceror’s house in Samaria. And he’s just baptizing everyone there all willy nilly.

This is happening while most of the leaders of the first Christian community are all still huddled back in Jerusalem, still working through the reservations they have post-Pentecost about whether everybody means everybody.

“Everybody means everybody” is pretty much the theme of the book of Acts. “In all Judea and Samaria, and to the ends of the earth.” The apostles seem to have taken that step-by-step, a bit haltingly.

Philip didn’t. Pentecost hits and he just says, “Oh, wow, I get it!” and he races off to … let’s see, what’s the most despised and excluded place you can think of? Right, Samaria. And once there he starts passing out the baptisms like Oprah giving away cars.

This surprises the apostles back in Jerusalem, who were still at that point mostly going, “Now when Jesus said ‘all Judea’ did that really mean all Judea? …” Philip caught them off guard by skipping ahead to the “and Samaria” bit.

So Peter and John head to Samaria to see what Philip’s been up to, and to maybe assert a bit more control over his indiscriminate evangelism. They arrive and discover that some of Philip’s brand-new converts are still acting and thinking like brand-new converts. Simon (the Samaritan sorceror, not the apostle) greets them by saying, “This anointing of the Holy Spirit thing is awesome! How much?” So the apostles explain that God’s grace isn’t for sale, and they rebuke Simon, who apologizes. Then Peter and John turn to have a word with Philip, but he’s already gone.

The apostles, though, realize that Philip was right about the whole Samaritan thing. “Peter and John returned to Jerusalem, preaching the gospel in many Samaritan villages.”

Where’d Philip go? He was racing off to work on that “ends of the earth” business, thus bringing us to our third Philip story, the one with the Ethiopian eunuch.

“So, OK then,” the man says to Philip. “I’m a queer black foreigner who works for the government of a Gentile queen. Is there any reason I can’t be baptized?”

And Philip baptizes him.

The last time Philip shows up isn’t really a Philip story. It’s later in the book of Acts, and everything is pretty much a Paul story by that point in the book. Paul has been working on the “ends of the earth” thing, too, but now he’s on his way back to Jerusalem and he stops off at Philip’s house along the way. This is where we learn that Philip “had four unmarried daughters who had the gift of prophecy.”

Philip’s daughters were preachers. They were ordained and anointed to preach.

So I’m guessing that nearby church is named after the other St. Philip — the apostle who said little and didn’t run around baptizing everybody and ordaining daughters and whatnot.

Philip the Evangelist would make a terrific namesake for a church, but only for one that has wholly decided, as he did, that everybody means everybody.

March 21, 2017
The audacious claim that we are not shaped by history
Next Post