It’s never quite as it seems

• I slid down a Google hole reading about the history of Bethesda Academy (see here and here and here) — the boys’ school near Savannah, Georgia, which began as an orphanage founded by famed evangelist George Whitefield in 1740. Frustratingly, most accounts of the school’s long history jump from Whitefield to the 20th century. That skips over what it seems is probably the most interesting part of the story, and the bit I failed to discover: What happened to this orphanage and its supporting plantation on January 16, 1865, and in the years that followed?

That question was prompted by the latest installment of Erik Loomis’ “This Day in Labor History” series:

On January 16, 1865, General William Tecumseh Sherman issued Special Field Order No. 15, granting coastal plantation properties from Savannah, Georgia to the St. John’s River in Florida to ex-slaves. Extending thirty miles from the coast, this had the potential to reshape southern labor relations as much as the end of slavery. However, northern belief in private property rights and agricultural capitalism eventually doomed this project.

So George Whitefield’s orphanage and plantation — the enterprise and interest that inspired the evangelist to lobby, successfully, for the reintroduction of legal slavery in the colony of Georgia — fell squarely in the coastal zone liberated by Sherman’s march to the sea. This was 40-acres-and-a-mule territory, ground zero for the broken promises of emancipation and Reconstruction. That’s an important and monumentally consequential chapter of our history, and of the history of this particular site, but it gets skipped over, almost as though it never happened at all.

• Here’s another Joel Duff post that encapsulates why I love his blog: “The Elephants in the Room: Rapid Migration and Recolonization of the Earth Following a Global Flood.” 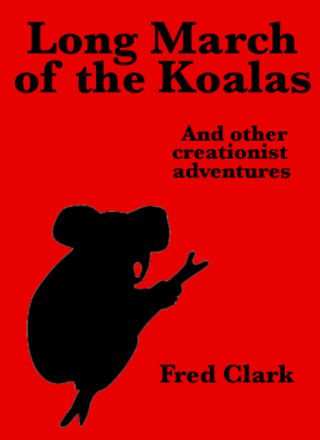 Well, young-Earth creationists, probably. Because their weird extrabiblical folklore really, really cannot explain how those creatures got there. Duff goes into fascinatingly extreme detail about just how insurmountable a problem this is for our creationist friends. In a sense, it’s a less-snarky, more-science-y version of Long March of the Koalas (just 99 cents at Amazon!).

• “Mitt Romney is Not the Tonic for Trumpism” Martin Longman writes, reminding us of Steve Benen’s Herculean achievement of documenting the many lies told by Romney as a presidential candidate. More than 500 of them.

Lying — even lying a lot — wasn’t a new or unusual approach for politicians and presidential candidates, but Romney routinely crossed a line that other candidates hadn’t previously attempted to cross. What set Romney apart — and paved the way for Donald Trump — was his habit of not correcting his lies after they had been proven false, even after this happened publicly, to his face.

It was an experiment of sorts, a way of testing the capacity of the right-wing media bubble to insulate its audience from what Karl Rove famously sneered at as the “reality-based community.” And it worked. Romney may have lost the election, but he didn’t lose his base. They stuck with him despite his refusal to correct demonstrable falsehoods that he was known to know were false.

So, no, Romney is not “the tonic for Trumpism.” He was John the Baptist to Trump’s Jesus.

• David Neiwert is one of the best observers and interpreters of the far-right fringes of American life. (I still miss his old Orcinus blog.) He takes a long look at the sudden emergence of the “hypertrophied” conspiracy theory, “The Storm,” writing for the SPLC: “Conspiracy meta-theory ‘The Storm’ pushes the ‘alternative’ envelope yet again.”

Again, this “theory” is dazzlingly bonkers. But it’s also spreading — gaining ground, especially, among the entrepreneurial “prophets” of INC Christianity.

• “As he has gotten older, Cole has swapped heels for sequined flats, but still takes the stage four nights a week, and twice on the weekends.” A lovely profile of “the world’s oldest performing drag queen.” Darcelle loved Portland for so long that eventually Portland had no choice but to love Darcelle.

• RIP Dolores O’Riordan, lead singer of the Cranberries. She was 46. The title of this post comes from their song “Dreams,” which showcases the ethereal loveliness of O’Riordan’s voice. My favorite of theirs, though, is the anti-war cry “Zombie,” which stretches that voice in an angry, heart-breakingly heart-broken direction:

January 17, 2018
We have violent rivers that nobody goes near
Next Post

January 18, 2018 January fundraiser (shameless begging, pleading to follow)
Recent Comments
0 | Leave a Comment
Browse Our Archives
get the latest from
slacktivist
Sign up for our newsletter
POPULAR AT PATHEOS Progressive Christian
1