When we flinch at empathy, it curdles into fear and resentment

A couple of years ago we discussed the white panic that led to the so-called “New York Conspiracy of 1741.” It was, I wrote then, based on something very similar to empathy:

It was empathy denied, empathy neglected and rejected and thereby channeled into something twisted and perverse, but empathy is still where it began.

That event is sometimes referred to as the “New York Slave Revolt of 1741,” but there’s very little evidence that any such revolt ever took place or even had been planned. White New Yorkers panicked due to their fear of a potential slave revolt. That fear, I think, refutes all the nonsense we often hear about how the stark immorality of the slave system was perceived differently back in those days, and how we should all be more generous toward the defenders and exploiters of slavery because things were different back then and (white) folks just didn’t know any better.

They knew. That’s why they were scared. In 1741 … white New Yorkers were wild with fear of a slave revolt because they knew that slavery was an abominable, intolerable injustice. They looked at this brutal system and — even if only semi-consciously — thought about what they would do if they were the ones being crushed by it. And they realized, with utter clarity, that they would want to resist and revolt and to overthrow their oppressors. And they realized, just as clearly, that they would be justified in doing so.

That is why they were afraid.

This, I think, explains Sheila — the 67-year-old lifelong Southern Baptist church-goer and Sunday-school teacher from Luverne, Alabama, whose stark, sanctimonious, and proudly proclaimed racism may have been the most jaw-dropping aspect of Stephanie McCrummen’s remarkable Washington Post feature on this Trump-worshipping church (see earlier).

I read that story a week ago and I’m still gobsmacked by the fact that this woman openly professes to be scared to death of Rosa Parks. And that her church, knowing this about her, elected to have her teach others about what it means to be a Christian.

Here’s that section of McCrummen’s article:

And there was Sheila Butler, who sat on the sixth pew on the right side, who said “we’re moving toward the annihilation of Christians.”

She was 67, a Sunday school teacher who said this was the only way to understand how Christians like her supported Trump.

“Obama was acting at the behest of the Islamic nation,” she began one afternoon when she was getting her nails done with her friend Linda. She was referring to allegations that President Barack Obama is a Muslim, not a Christian — allegations that are false. “He carried a Koran and it was not for literary purposes. If you look at it, the number of Christians is decreasing, the number of Muslims has grown. We allowed them to come in.”

Linda nodded. It wasn’t just Muslims that posed a threat, she said, but all kinds of immigrants coming into the country.

“Unpapered people,” Sheila said, adding that she had seen them in the county emergency room and they got treated before her. “And then the Americans are not served.”

Love thy neighbor, she said, meant “love thy American neighbor.”

Welcome the stranger, she said, meant the “legal immigrant stranger.”

To her, this was a moral threat far greater than any character flaw Trump might have, as was what she called “the racial divide,” which she believed was getting worse. The evidence was all the black people protesting about the police, and all the talk about the legacy of slavery, which Sheila never believed was as bad as people said it was. “Slaves were valued,” she said. “They got housing. They got fed. They got medical care.”

She was suspicious of what she saw as the constant agitation of blacks against whites, the taking down of Confederate memorials and the raising of others, such as the new memorial to the victims of lynching, just up the highway in Montgomery.

“I think they are promoting violence,” Sheila said, thinking about the 800 weathered, steel monoliths hanging from a roof to evoke the lynchings, one for each American county where the violence was carried out, including Crenshaw County, where a man named Jesse Thornton was lynched in 1940 in downtown Luverne.

“How do you think a young black man would feel looking at that?” Linda asked. “Wouldn’t you feel a sickness in your stomach?”

“I think it would only make you have more violent feelings — feelings of revenge,” said Sheila.

It reminded her of a time when she was a girl in Montgomery, when the now-famous civil rights march from Selma was heading to town and her parents, fearing violence, had sent her to the country to stay with relatives.

“It’s almost like we’re going to live that Rosa Parks time again,” she said, referring to the civil rights activist. “It was just a scary time, having lived through it.”

She thought an all-out race war was now in the realm of possibility. And that was where she had feared things were heading, right up until election night, when she and Linda and everyone they knew were praying for God to save them. And God sent them Donald Trump.

“I believe God put him there,” Sheila said.

Sheila allows her imagination to engage in an act of empathy. “Wouldn’t you feel …?” she asks. And what she means, of course, is that this is how she would feel if she were in the place of the other whom she fears with an obsessive, life-shaping, faith-consuming fear.

Sheila has thought long and hard about this. She knows — she is certain — of what she would do if she were on the other side of “the racial divide.” She would turn to violence. She would seek revenge. She would be obliged and entitled to seek violent revenge. It would be her due in the face of such persistent, intolerable, oppressive injustice.

So it will not do to claim that someone like Sheila is merely ignorant. She knows that her babble and blather about slavery not being that bad is total bullshit because she’s felt a “sickness in her stomach” pondering how she would have felt if that had been her. She knows better. She knows. She understands the long history of relentless injustice and she understands her own role in it — her complicity, her responsibility. 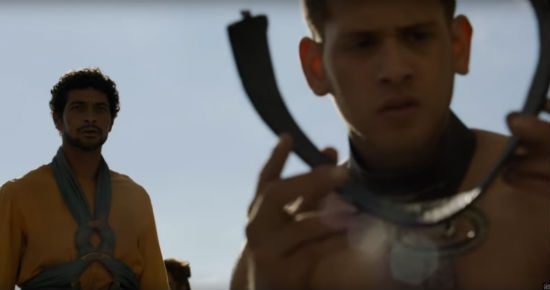 But this knowledge does not lead her to repentance. It leads her, instead, to double-down on her investment in that very injustice.

And she knows that too. She understands that it’s unfair and she cannot comprehend anyone accepting such unfairness without seeking violent revenge. And thus she is afraid — constantly, always afraid.

It might seem, then, that salvation for someone like Sheila could come by helping her to overcome her fear — by convincing her, somehow, that the oppressed seek only justice, not violent revenge. That was a major theme of Barack Obama’s remarkable sermon at the memorial service for Clementa Pinckney and the other victims of the church shooting in Charleston, S.C. It was the “amazing grace” he spoke of and sang of, a grace magnanimously, miraculously extended toward Sheila and the millions of others just like her.

But we cannot be compelled to accept grace. Such grace may be offered to people like Sheila, but that cannot force her to receive it or to allow it to assuage the fear she prefers — the fear she has made into her identity and her defining trait.

So what can be done for fearful fools like Sheila? Here, again, I turn to Dietrich Bonhoeffer’s prison essay on “folly,” which was written in consideration of people just like Sheila — people who had chosen to allow themselves to be enchanted by a cruel demagogue whom they claimed was sent by God:

Folly can be overcome, not by instruction, but only by an act of liberation; and so we have come to terms with the fact that in the great majority of cases inward liberation must be preceded by outward liberation, and that until that has taken place, we may as well abandon all attempts to convince the fool.

Salvation and redemption for Sheila Butler — and for Pastor Clay Crum, and for all the fear-shaped, folly-driven captives deformed by the ideology of First Baptist Church of Luverne — will only come from an act of outward liberation. They cannot be instructed or educated or persuaded or convinced to escape from their self-imposed prison. Its walls will have to be torn down and its wardens swept away. Only then, after such outward liberation, will their inward liberation be possible.

And the next vital step of that outward liberation is coming up soon. In 97 days.

July 30, 2018
The Mother of Exiles has a fistful of lightning
Next Post