The Mother of Exiles has a fistful of lightning

• In the Narnia books, Aslan refers to the children from our world as “sons of Adam and daughters of Eve.” That’s lovely, evocative language, and since it comes from some of the few books that all white evangelicals are permitted to read, it often gets recited and recycled in other evangelical books, articles, and sermons.

Oddly, though, no one ever seems to switch it up, saying, “daughters of Adam and sons of Eve,” even though that formulation is necessarily just as true and meaningful as the original. Even more oddly, the latter form seems to upset some of the same people who are most fond of C.S. Lewis’ original phrase.

There’s a whole universe of weirdly incoherent theologizing behind that discomfort. It shows how the so-called “complementarian” dudes on some level seem to believe that men are descended only from Adam and women are descended only from Eve. That’s not how heredity works. It’s not how parents work. It’s incompatible with everything we know about both nature and nurture.

That’s worth exploring in greater depth, but for now just let me recommend saying “daughter of Adam” or “son of Eve” around those folks just for the pleasure of watching them squirm.

• Donald Trump today said that America “is the laughing stock of the world” because of our immigration laws. And he said this in the context of arguing — in contradiction of his most-famous and most-repeated campaign promise — that American taxpayers should fund his proposed border wall. Trump doesn’t quite seem to realize that “Mexico will pay for it” is regarded as a hilarious punchline all over the world and that his delusional insistence on that is the cause of the global laughter he’s hearing.

But the deeper problem here is Trump’s weird notion that welcoming immigrants and refugees makes America a “laughing stock.” That’s just … weird. Especially for a guy from New York City.

The classic articulation of everything that bewilders Trump (and his supporters) in that regard is Emma Lazarus’ poem, “The New Colossus”: 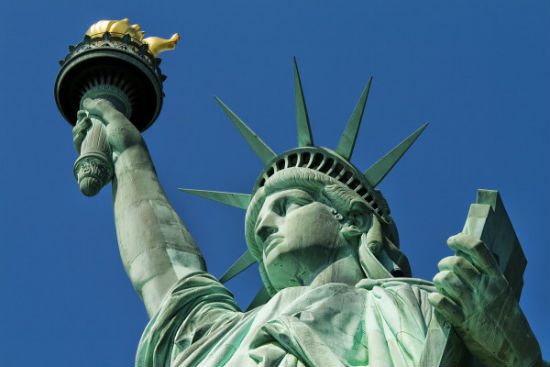 At the most basic level, Trump just plain doesn’t understand the appeal of that. It baffles him. He’s still stuck on his envy of “the brazen giant of Greek fame.” He’s desperate for “storied pomp” and for flamboyant symbols of might and conquest and subjugation.

“Mother of Exiles” just strikes him as a shameful insult. It repulses him. So do all those other, more famous words from Lazarus’ poem: poor, masses, wretched refuse, homeless.

He and his followers are simply unable to understand what you see, what most people see — which is that Mother of Exiles is just about the most bad-ass, kick-ass title imaginable. The Mother of Exiles with a fist full of lightning — seriously, what could possibly be cooler than that?

But Trump, apparently, will never understand that. Or maybe he just hates the Statue of Liberty because it’s full of stairs.

• Thayer Verschoor, appointed by Trump as executive director of intergovernmental affairs at the Veteran’s Administration, is a promoter of racist “birther” lies, believes that vaccines are “poison,” and says there’s a “Muslim problem” in America.

Any other president, governor, mayor, or school board chair who appointed someone this hateful and stupid to such an important post would be relentlessly hounded just for that. This guy isn’t even a Top 100 Worst Trump appointee.

And Republicans won’t do anything about it. What a cesspool that party has become.

• Speaking of the cesspool formerly known as the Republican Party: Ohio Rep. Jim Jordan is making a bid to become the next GOP Speaker of the House.

I will grant that having a former wrestling coach who, for years, looked the other way as dozens of athletes were sexually abused by someone else is a marginal upgrade over the longest-serving Republican speaker, Denny Hastert, who was a former wrestling coach who was directly, personally responsible for sexually abusing athletes. Still, though, would it be too much to ask that Republicans maybe look for a congressional leader who isn’t connected to the sexual abuse of wrestlers at all?

(That’s a rhetorical question because the answer, obviously, is yes, that would be too much to ask of them. If he were still around, the GOP would absolutely be nominating John du Pont to serve as their next speaker. That’s just how they do things now.)

(FWIW, Ruttenberg puts a big dent in the argument I make in that last one, considering that “non-adulterous women miscarried then at the same rates they do now” — thus meaning that what I a bit-too-optimistically want to regard as “Solomonic theater” might mean condemnation and humiliation for innocent women already suffering a tragedy.)

Rewriting the Sermon on the Mount (Part 1...
Our reading this week from the sermon on the mount gives us...
view all Progressive Christian blogs
What Are Your Thoughts?leave a comment