• Hey did you hear about the white evangelical institution that took a positive step toward something less awful, more inclusive, and more just? Oh, wait … never mind.

Azusa’s brief flirtation with doing the right thing, followed by its hasty retreat due to the intervention of its trustees (i.e., The Money) is somehow more depressing than if the school had done nothing. Then, at least, we could give them the benefit of the doubt that they just didn’t know any better. Realizing they do know better, yet lack the courage of their convictions, is just sad. It recalls this opposite-of-a-profile-in-courage moment from Sen. Jeff Flake on 60 Minutes:

Sen. Jeff Flake (R-Ariz.) said Sunday that there’s “not a chance” he would have called for an FBI investigation into the allegations of sexual misconduct against Supreme Court nominee Brett Kavanaugh if he were running for reelection.

• Barry Duke tells us that yet another court evangelical has a book about Donald Trump coming out soon. (A big part of the president-and-founder ministry mogul racket is cranking out lots of books to sell via direct-mail fundraising appeals.)

The news of Kenneth Copeland’s “journalistic” effort is less interesting to me than the other thing I learned from Duke’s post, which is that Copeland is apparently deliberately trying to look as much like a Dick Tracy villain as possible: 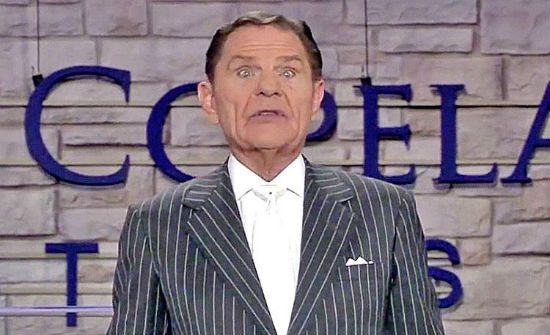 It looks like he went to both his tailor and his barber with drawings by Chester Gould and said, “Give me that.”

• Speaking of the court evangelicals, tomorrow night is Liberty University’s big event — the world premiere of their marquee film production, The Trump Prophecies. This is a full-throated, institutional endorsement of self-proclaimed “firefighter-prophet” Mark Taylor, who preaches that God has ordained Donald Trump to “save” [white] America. Liberty University is all-in on Mark Taylor.

So what’s Taylor up to in the day’s before Liberty’s red-carpet gala? He’s taking to the airwaves to explain that Hurricane Florence was created by the baby-killing cannibalistic Jews of the Illuminati, and “aimed at North Carolina in order to flood the state and destroy evidence of massive voter fraud.”

Liberty University is a degree-granting institution that students pay an average of $24,000 a year to attend.

• “When the subject turned to Trump’s zero-tolerance policy on immigration, the mayor replied with what was already becoming a familiar refrain: ‘I don’t agree with him on that!'”

That’s from Ryan Lizza’s fascinating, frustrating visit to Sibley, Iowa — home of the family dairy farm owned by California Republican Rep. Devin Nunes. The piece — “Devin Nunes’s Family Farm Is Hiding a Politically Explosive Secret” — is organized around Lizza’s quest for the actual location of that farm, and around the family’s weird and kinda creepy efforts to hide that, but the central theme that arises, instead, is the way this immigrant-labor-dependent county also reliably re-elects its xenophobic, white-nationalist congressman, Steve King, and continues to enthusiastically support the most anti-immigrant presidential administration of my lifetime:

Midwestern dairies tend to run on undocumented labor. The northwest-Iowa dairy community is small. Most of the farmers know one another, and most belong to a regional trade group called the Western Iowa Dairy Alliance (though WIDA told me NuStar is not a member). One dairy farmer said that the threat of raids from ICE is so acute that WIDA members have discussed forming a NATO-like pact that would treat a raid on one dairy as a raid on all of them. The other pact members would provide labor to the raided dairy until it got back on its feet. …

In the heart of Steve King’s district, a place that is more pro-Trump than almost any other patch of America, the economy is powered by workers that King and Trump have threatened to arrest and deport. … The absurdity of this situation — funding and voting for politicians whose core promise is to implement immigration policies that would destroy their livelihoods — has led some of the Republican-supporting dairymen to rethink their political priorities. “Everyone’s got this feeling that in agriculture, we, the employers, are going to be criminalized,” the first area dairy farmer I had spoken to said. “I’ve talked to Steve King face-to-face, and that guy doesn’t care one iota about us. He does not care. He believes that if you have one undocumented worker on your place, you should probably go to prison and we need to get as many undocumented people out of here as possible.”

The piece also includes an awkwardly touching glimpse of the Lantern — Sibley’s best coffee shop. It’s a “Christ-centered, non-profit ministry” that “desires to be a place of intentionality, grace, & genuine love for our neighbors.” It also apparently serves a great cup of coffee. They seem like the kind of white evangelicals I sometimes describe as Very Nice People — they’ll ask if you’re “a believer,” but won’t be rude if you say no. Those folks have also been through some real hardship lately, so if you’re ever in Sibley, maybe stop by, have some coffee, and make it also a place of intentionality, grace, and genuine love from their neighbors.

• For a good companion/tonic to Lizza’s report from the “heartland,” check out Daniel José Camacho’s interview with Sarah Smarsh, author of Heartland: A Memoir of Working Hard and Being Broke in the Richest Country on Earth. Smarsh, who’s from rural Kansas, has seen way too many of those safari-in-Trumpworld articles from the midwestern realmurka, and she ain’t having it:

I think the most common misconception would be that the entire state is white and conservative; let’s say, Trump’s base. Living on the ground in a place like Kansas or anywhere that’s cast as “Trump Country,” one knows firsthand that these are actually diverse places in race, culture, politics, and every other way just like blue states are.

Sarah Smarsh is on Twitter and her feed is a great antidote to red-state safari nonsense.

• The title of this post comes from this Bruce Springsteen song, which sprang to mind when I read that first news item from Azusa-Pacific University.

October 3, 2018 The shape of Brett Kavanaugh's lies
Recent Comments
0 | Leave a Comment
Browse Our Archives
get the latest from
slacktivist
Sign up for our newsletter
POPULAR AT PATHEOS Progressive Christian
1