Both Allen Toussaint (1938) and Clarence Carter (1936) were born on January 14, so here’s Carter doing a song written by Toussaint:

Today is also the birthday of Martin Niemöller. As I wrote of him a while back:

We remember his name because of his eloquent confession of the gravest moral failing imaginable:

And, yes, he voted for the Nazis. Twice.

There are lots of little Niemöllers — feckless bystanders irresponsibly standing by — in the pages of America in the King Years, the epic trilogy chronicling the history of the Civil Rights Movement by Taylor Branch, who was born on January 14, 1947.

I’ve only read the first volume of Branch’s history, Parting the Waters: America in the King Years, 1954-63. I need to read the rest. This is history, but it’s also current events, as the backlash to everything Branch chronicles has shaped all of our lives and politics and religion in the half century that has followed the period he wrote about.

Happy 67th birthday to both Maureen Dowd and Sydney Biddle Barrows. One of them became nationally infamous for profiting from prurient fantasies in Washington, DC. The other one was the Mayflower Madam. 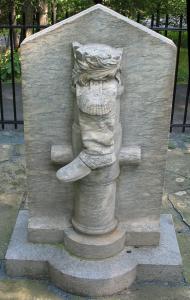 January 14 is also the birthday of Benedict Arnold. The Boot Monument (right) at Saratoga National Historical Park in New York honors Arnold’s heroism in fighting for American independence at the Battle of Saratoga, where he was wounded in the leg. The rest of Arnold, apart from the leg, doesn’t get a statue because Arnold later turned traitor, joining the British side of that war in 1780 when he schemed to surrender West Point to the redcoats.

This should be a general rule: Traitors who turn against America and fight for its enemies should not be honored with statues. If it’s true for Benedict Arnold, it should also be true for Robert E. Lee, Stonewall Jackson, etc.

Finally, January 14 was also, for centuries, the day of the Feast of the Ass — an unruly medieval Christian festival based very loosely around the donkey that Mary, Joseph, and the infant Jesus rode when they fled to Egypt as refugees.

The donkey doesn’t actually appear in the terse biblical account from Matthew’s Gospel — “Then Joseph got up, took the child and his mother by night, and went to Egypt, and remained there until the death of Herod” — but putting the apocryphal beast center-stage made for a raucous festival and an excuse for lots of bawdy jokes about asses. The celebration also included a weird pageant involving a young girl riding a donkey as well as congregants playing the roles of St. Augustine, Nebuchadnezzar, and the Erythraean Sibyl.

It all sounds like a fun bit of irreverent absurdity until you realize that beneath all the donkey business, the core of the pageant was an ugly antisemitic diatribe. Ugh.

So then: Donkeys are good. Ass-jokes are funny. The Flight Into Egypt is worthy of commemoration. But the Feast of the Ass really isn’t something we need to revive.