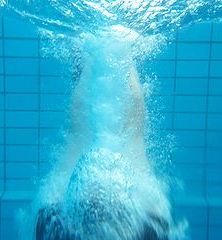 [ On July 5-7, The Ekklesia Project will hold its annual gathering in Chicago, which will be on the theme of Slow Church.  Between now and July, we will be running a series of lguest reflections here by folks connected with the E.P. We’ve asked guest posters to reflect on the meaning of Slow Church from their own local contexts. More info on the E.P. gathering.  ]

Today’s reflection, the first in the series, is by Lee Wyatt.

Though we live (or have lived) in the age of the Emerging/Emergent Church, I have a different proposal for a new vision of church. I call it the Submerging Church! Am I serious, you ask? Maybe. Maybe not. Maybe both. Read on and see what you think.

The Submerging Church, as I see it, is radically subversive, relentlessly incarnational, and ruthlessly hospitable. It dives deeply into everyday life, sharing it with others, while at the same time questioning and critiquing the conditions of that life we share. Since this community lives from its center, the risen Jesus Christ, its boundaries are porous and permeable with arms outstretched to everyone who encounters it.

Characteristic of the Submerging Church are these:

-first, it is hard to find because it is everywhere;

-second, it is difficult to join because “membership” is relational and based on a shared journey towards the center;

-thirdly, it is culturally atheistic, that is, not committed to a cultural Christ or his civil religion;

-fourth, it is more like yeast, which though small permeates the whole, than a beast (a mega-church prominent in the community);

-fifth, it finds its “niche” with those at the margins rather than the center and their experiences and perspectives gained with them generates the “lens” through which it views and responds to the world; and

-finally, it focuses on “inner-tainment” (life with God) rather than entertainment.

-first, being a Kingdom Outpost rather than a religious institution;

-second, following a Cross-eyed Jesus rather a Cultural Christ;

-third, living by a Holy Script (Bible) rather than a cultural script;

-fourth, being centered on a bath and a meal rather programs;

-fifth, seeking justice for all (especially the poor) instead of good for “just us”; and    -sixth, sharing “communitas” rather than fellowship (google it!).

Well, there are the outlines of my vision for the Submerging Church. Do you think I’m serious or just funnin’ with you?

If becoming a Christian is at heart becoming human, and surely it is, then living Christianly must be living humanly, in a human style and at a human pace.  What we call “spirituality,” then, is nothing more or less than a human way of life.

Living a Christian life, or even explaining it to others, as we must, does not require specifically Christian acts or words.  Since it is living humanly, these everyday ways, can be explained in everyday non-religious language.

The lexicon of faith, the language of “Canaan,” is our “arcane discipline,” of worship and devotion (Bonhoeffer), the depth that undergirds our non-religious life and language. The Jesus we worship and adore, the “man for others,” (Bonhoeffer) is the content and goal of human beings we are becoming.

What might such “non-religious” language and living look like?  How might we describe it?  Perhaps the following will help us make a start. Human, that is, Christian, living is shaped by actions such as the following:

Slow Down (Sabbath from Speed)

Three-miles-an-hour is the speed at which humans normally walk. It is the “human” speed.   But, as Brooks, a character in The Shawshank Redemption said upon release from prison after fifty years, “The world’s gone and gotten itself in a big damn hurry.”  By becoming human, Jesus brought “God” to us at a “speed” we could understand and relate to.  If Jesus is the definitive revelation of God, and if I constantly move at faster and faster speeds, if I am perpetually “too busy,” I will discover myself more and more out of touch with a Three Mile-an-hour God (Kosuke Koyama)

If cyber-space becomes our primary connection to life, it has become a surrogate reality.  In spite of, or perhaps because of, its gifts, we need regular breaks from cyber-space, periods when I sign out in order to reach out and lay hold of the life-in-relationships that alone sustain me.

Submerging spirituality recognizes the importance of “location, location, location.”  My ability to get up and go whenever I please often inhibits God’s call for me stay and grow where God pleases.  (See The Wisdom of Stability by Jonathan Wilson-Hartgrove)

Shut Up (Sabbath from Words)

Stoop Down (Sabbath from Controlling)

Humility, the grace to confess that I am a creature (who is not in control) and not God (who is), is best made palpable to me by re-connecting with the humus, the dirt from which God made me.  I daily eat a “sacramental” pinch of dirt to help this grace hit home for me.  We are a part of God’s creation, and by grace his partner in reclaiming and restoring it.  We best play our role by remembering who we are and the grace by which we live.

Distraction and diversion are in my experience the heart of the enemy’s strategy to disable our living humanly.  It short circuits my capacity to be present to my life.  I suffer from “Spiritual Attention Deficit Disorder”.  Wholeness in living comes for me when I rediscover the truth Kierkegaard captures in the title of his book Purity of Heart is to Will One Thing.

Discursive, linear, pragmatic thought rules most of the time.  I heard Walter Brueggemann call this kind of thought “memos.”  He said that such memos will kill you, but poetry (he was talking about the Psalms) gives life.  I encounter poetry mostly in song.  So I need to sing (even though I can’t carry a tune).  I think it was Augustine who said that the one who sings, prays twice.

My life is my relationships, and relationships mean sharing.  I must learn to share my necessities of life (food, communitas, faith) and joys and burdens with others while receiving their gifts and sharing their burdens as well.  This, as I said, is my life.

I need to pursue the path of downward nobility rather than upward mobility, divest, and de-clutter. I want what I have and know and do to serve life rather than me serving them.  To know the difference between want and need is a great gift.

Sleep (Sabbath from Self)

Sleep, enough sleep is a basic form of selflessness and trust.  To give ourselves unreservedly to God in the needs of our creatureliness is to affirm our Creator’s wisdom and the goodness of what he has made.  Sufficient rest is a primal act of faith and powerful witness in beleaguered, fatigued, workaholic world.

Lee Wyatt is a PC(USA) Pastor who lives in Wylie, Texas. 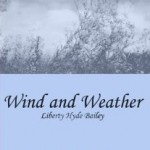 February 21, 2012 Liberty Hyde Bailey Poetry Reflections
Recent Comments
0 | Leave a Comment
"Every normal person wants to help those in need as we can.Church groups have the ..."
Bob Shiloh A Politics of Hope in the ..."
"Hi Abe; Are your mom and dad, Kath' & Tony? If so, then you have ..."
Steev Rush Garrett JPUSA: A Tragic History of Sexual ..."
"https://www.christianbook.c...One of the best books I've ever read!"
Nimblewill Reflecting On The Worst Christian Book ..."
"Yes...but I think you commented in the wrong post. ^^;;"
The Mouse Avenger Remembering Mr. Rogers.
Browse Our Archives
get the latest from
Progressive Christian
Sign up for our newsletter
POPULAR AT PATHEOS Progressive Christian
1