The United States of Iraq: Is it Evolution or De-evolution

The United States of Iraq: Is it Evolution or De-evolution July 19, 2016 Michael Wayne

Patheos Explore the world's faith through different perspectives on religion and spirituality! Patheos has the views of the prevalent religions and spiritualities of the world.
I live in the United States. In recent weeks, the amount of societal strife, through police shootings of unarmed black men, and then of the police being fatally shot themselves in Dallas, has escalated and reached a point where we are witnessing a certain level of societal disintegration.

On top of the most recent incidents, there were the shootings that took place in mid-June at a gay bar in Orlando, Florida, and that, along with countless other acts of violence and mass shootings that seem to take place on a daily basis, have caused life in the U.S. to resemble what life is like in Iraq, Syria and other war-torn countries that are experiencing an unraveling of their societal fabric.

Where are we going? Are we seeing our society and world disintegrate and de-evolve? If so, where is the potential for evolution and revolution into a more enlightened world?

There are terrorist organizations all over the world pushing an agenda of fear and hate and willing to sponsor and promote acts of violence against helpless civilians. In the Middle East, there is ISIS and Al-Qaeda, and in the U.S., there is the NRA, the KKK, and other hate groups. All of these organizations are playing a part in the spinning out of control of cultures and societies, and in the process, creating utter bedlam.

None of these groups are helping us work towards solutions, and instead are helping to tear us apart. But are they the problem, or are they just a symptom of something much deeper?

They are a symptom of something much deeper. ISIS was born from the U.S. decision to invade Iraq, a move that destroyed a country and created massive instability in the region. The U.S. decision to invade Iraq was predicated on the terror attack on September 11, 2001 in the U.S. And the terror attack on Sept. 11, 2001 was predicated on decades of American empire building in the Middle East, where the U.S., by protecting its own interests and the interests of multinational corporations, sowed the seeds of discontent among impoverished citizens of various Middle Eastern countries.

The U.S. was fueled by oligarchic greed and the need to feed the beast of empire building and corporate profits. The citizens of the Middle East who felt they needed to act were fueled by a desire to achieve justice through guerrilla warfare, and were incited by fundamentalist readings of their religious texts.

The U.S. was the conqueror and imperialist, and this was our God-given right. And even though the U.S. may have believed they were benevolent imperialists and were just playing the cop of the world, people in other lands didn’t appreciate their lands or natural resources being appropriated.

And now, the strife and cultural disintegration that is occurring in Iraq, Syria and other Middle Eastern countries, along with other developing nations, has been exported and has come home to haunt us in the U.S. We are de-evolving right in front of our eyes. We have become the United States of Iraq.

People are scared and frightened here in the U.S. And if you’re black or any other minority, it’s even worse, as just the simple act of driving could become fatal if you are stopped by a police officer. And to add insult to injury, the NRA continues their militaristic stance of advocating the right of every American to be armed, so that every person can protect themselves.

The problem with that was evident on the day in Dallas when the five policemen were killed, when at the Black Lives Matters march that was taking place, at least 20 of the marchers were carrying rifles, which is allowed under the Open Carry law in Texas. When the shooter started firing, the police had to discern who the real shooter was, being that there were all these people carrying weapons.

Gandhi once said, “An eye for an eye makes the whole world blind.” And a descent into blindness – and madness – is where we are heading, if we continue to live in a world of de-evolution, a world fueled by fear, and hate, and violence, and greed, and fundamentalist thought.

That won’t get us anywhere except further societal disintegration and chaos. And demagogic politicians who play to these fears – such as Donald Trump – only make matters worse.

We have a choice: evolution or de-evolution. Society can come together or society can fall apart. We can recognize we have problems and issues and do something significant about it, or we can allow the status quo to continue.

It is up to each of us. Here in the U.S., we can live in the United States of Iraq, or we can come together and move beyond the primal brain and into the realm of higher and more sophisticated levels of thinking. And in the process, we can be part of the building of a more evolved world, so that cultural disintegration takes place nowhere on earth and instead cultural integration is the norm.

It’s about love. It’s about evolution. It’s about the courage to stand tall and not live in fear. Ultimately, it’s about embracing the better angels of our nature. 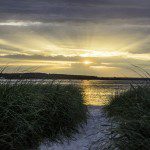 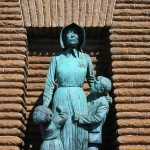 July 23, 2016 A lesson in gratitude when the AC goes out
Browse Our Archives
get the latest from
Spirituality Itself
Sign up for our newsletter
POPULAR AT PATHEOS New Visions
1

Leaning Back
Fumbling Toward Grace
Related posts from Spirituality Itself

I Promise You
I was in a circle of those who climbed from the sea...
view all New Visions blogs
Copyright 2008-2020, Patheos. All rights reserved.