John Wayne vs. The Buddha: The Quantum Mind Gets Political

John Wayne represented the quintessential go it alone American, ready to stand up and fight for American values. This was the role he played in many of his movies – whether he was the cowboy, the outlaw, or the solider – and his personal political viewpoints were mirror images of his movie roles.

This viewpoint reflects the belief that it’s my country right or wrong, and that you’re either with me or against me. It’s rugged individualism at its finest (or worst, depending on your perspective).

The way of thinking that the binary mind exhibits causes a person to be dogmatic and rigid in their perspective, and also causes them to not be able to see the forest for the trees. They keep a closed mind, so when they are presented with new ideas that seem outside their viewpoint, they have a knee jerk reaction that shuts down the possibility of this new idea. Their answer to most things is no; it’s hard for them to allow yes to be the answer.

Binary mind thinking emanates from the small brain, the survival-oriented reptilian brain, the part of the brain that is primal and fear based. It is the way animals think and react when they feel they are cornered and fear for their survival. Physiologically, this thinking is triggered by the flight or fight response.

Humans have evolved – as have our brains – to move past the operating system of the small brain and binary thinking. As our brains evolved and developed a neocortex, we became capable of higher cognitive functioning and the ability to reason and think things through in a rational way, and to move away from survival oriented thinking and even emotional thinking, which is the way of the limbic system. In other words, the neocortex led to more enlightened thinking.

I talk about all this because here in the U.S., we are in the midst of a fierce political season, with the presidential election on the horizon. The Republican and Democratic National Conventions presented two different worldviews: the John Wayne worldview and the Buddha/quantum mind worldview.

The John Wayne worldview, espoused at the RNC, is of a dark and dangerous world, where danger lurks around every corner and we must be vigilant and stand guard against everyone and everything and not trust anyone, especially those who are different from us.

The Buddha/quantum mind worldview, espoused at the Democratic Convention, is of a world in which there is hope, in which the better angels of our nature can and should be allowed to soar, where people are essentially good, and we can reconcile our mistrusts by getting to understand one another better.

The Buddha/quantum mind worldview is the worldview that needs to seep into the political arena if we are going to move past what humans have always done  – killed one another in the name of survival – and instead learn to live with one another in a collaborative way.

There have always been wise men and women walking the earth who were able to tap into the Buddha/quantum mind and remind us to listen to the better angels of our nature. Martin Luther King, Jr. was one of these people, and he was very active in the political arena. This is one of Martin’s quotes:

The ultimate weakness of violence is that it is a descending spiral,
begetting the very thing it seeks to destroy.
Instead of diminishing evil, it multiplies it.
Through violence you may murder the liar,
but you cannot murder the lie, nor establish the truth.
Through violence you may murder the hater,
but you do not murder hate.
In fact, violence merely increases hate.
So it goes.
Returning violence for violence multiplies violence,
adding deeper darkness to a night already devoid of stars.
Darkness cannot drive out darkness:
only light can do that.
Hate cannot drive out hate: only love can do that.

When you can understand what is driving your thinking – is it John Wayne’s “me against them”, or is it Buddha/quantum mind? – then you are on the path to more enlightened thinking. Acknowledging how you are thinking and labeling it is a big step in understanding what drives you.

As Dr. King said, Darkness cannot drive out darkness. Only light can do so. The light is a more enlightened approach, which is what comes forth when the quantum mind gets political. 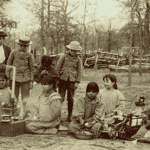 August 8, 2016
Quaker Indian Schools: A Legacy We Need to Heal
Next Post

August 16, 2016 A little known fact about farting and spirituality
Browse Our Archives
get the latest from
Spirituality Itself
Sign up for our newsletter
POPULAR AT PATHEOS New Visions
1

A 10-Step Guide to Leading a More Spiritual...
We are spiritual beings having a human experience. ~Pierre Teilhard de Chardin...
view all New Visions blogs
Copyright 2008-2020, Patheos. All rights reserved.