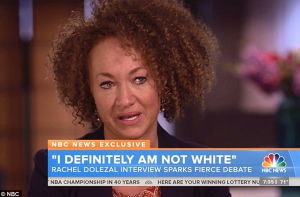 Black progressives need to seriously start recognizing the chaos and absurdity they have brought on themselves. There are very real problems in our society that stem from racism and all-too-real prejudice that disrupt families and ruin lives. But when the social justice warriors go crazy about little petty things that don’t matter or when they loan the mantle of civil rights to stupid folk who pretend to be something they’re not, this is what happens.

Maybe people are finally starting to wake up.

You all probably remember Rachel Dolezal, the leader of the NAACP chapter in Spokane, Washington? She was biologically white but spent her whole life pretending to be black so that she could be on the cutting edge of crying “racism” even when none existed.

Well, after no longer heading up the NAACP chapter and no longer teaching Africana studies at Eastern Washington University, Rachel has finally admitted that she is in fact white… even though she says she “identifies” as black.

The Daily Caller has more:

Until Monday, Dolezal had skirted all questions about her racial background, instead claiming that since she identifies as black that she is black. But the hosts of The Real called her bluff.

One of the hosts pushed back on Dolezal’s evasion asserting that one issue with her falsely claiming to be black is that she ignores that “there are opportunities that I might not get that you can have only because of the color of my skin.”

When asked if she has ever experienced something like that, Dolezal said, “well, the police mark black on my traffic tickets.”

“Why not say you’re white, but you identify as black but you don’t seem to answer the question straight on?” Dolezal was asked by another co-host.

When Dolezal finally caved and admitted that she has white parents, the audience gave her a standing ovation.

Here is the clip from the show:

Again, racism is real and there are problems ruining people’s lives. But when progressives play their petty little games of pretend, the real victims suffer.

That’s not worth standing up for. That’s worth mockery only. Enough. 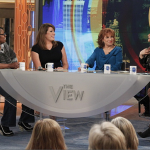 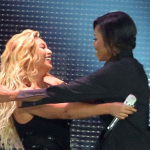 November 10, 2015 First Lady Encourages Girls to Listen to Musical Lyrics with “N Word”
Recent Comments
3 Comments | Leave a Comment
Browse Our Archives
get the latest from
Politics Red
Sign up for our newsletter
POPULAR AT PATHEOS Politics Red
1