How BET Lies to Black People

Ever since I said THIS on Fox yesterday, Black Entertainment Television has been throwing shade.

They reminded me — and the rest of America — that I appeared on a show called The Game, which appeared on BET.

“Soooooo @realstaceyldash, can we get our check back… or nah?” the Instagram caption read. “#Remember #YouWereOnTheGame #AndWeDontMeanTheRapper.”

Well, here’s the thing.  Thank you for reminding me, since most people have never heard of that show.

I think I’ve made my point.

I’m thankful for all of the acting jobs I’ve had.  But I look forward to the day when people don’t self-segregate based on skin color, while loudly complaining about a segregated society.

That might be hard for the people at BET to understand, especially after I read this quote from a BET exec about the Oscars:

“It would be great if the Oscar nominees represented even closely the percentage of moviegoers who are of different ethnicities, but they don’t,” said Stephen Hill.

Wow.  Apparently, Mr. Hill doesn’t understand what an Oscar is.

Oscars are awarded to the actors and actresses who excel…  not the audience.

What’s next?  Awarding $1 million to the guy sitting in his pajamas on the couch watching Survivor?  Giving a blue ribbon to the kid who stayed home from field day?  Giving a Nobel Peace Prize to a President who escalated wars in Iraq and Afghanistan?

No, that would be unreasonable.

My problem goes back to the notion that every area of life needs to break down exactly according to demographic ratios except in those areas in which black people have decided they want to have their own space.  I don’t have a problem with black people having their own space.  I have a problem with the folks at BET absolutely freaking out when other institutions don’t match up to what they think is best.  At National Review, they put it this way:

From their undisputed cultural heights, progressives have sold the American people on a fantasy that says America is racist unless every demographic group enjoys the benefits of its life and shares its burdens in exact proportion to their numbers — except, of course, when it comes to areas of the culture dominated by African-Americans.

The article goes on to say that “It’s perfectly fine for hip-hop or jazz to be overwhelmingly black, but…”  Lord help the institution that doesn’t measure up to the standards of “diversity” they deem is acceptable.

BET lies to American black people by telling them that the rest of America is racist, so stick close to your own kind. Anything that promotes segregation is bad!

And they’re absolutely mortified that someone like me — an independent-thinking black woman — dares call their bluff. 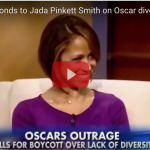 January 20, 2016
I Was Right Today on Outnumbered: There Should Be No Black History Month
Next Post

January 23, 2016 Why I Say What I Say, Even Though I Drive Whoopi, BET, and Most Other Black People Crazy
Recent Comments
949 Comments | Leave a Comment
"Hi there, sluggerz.For the purpose of what I talk about re: racism, it's to do ..."
penpusher Snoop Dogg threatens to “roast the ..."
"Can you give your thoughts on slavery worldwide? After all, slavery didn't start in the ..."
sluggerz Snoop Dogg threatens to “roast the ..."
"Hi there Bob Wehadababyitsaboy.The problem we must negotiate, when attempting to have some semblance of ..."
penpusher Haircare ad featuring white girls angers ..."
"Are you some kind of idiot? You think that EVERYBODY doesn't deal with shit like ..."
Bob Wehadababyitsaboy Haircare ad featuring white girls angers ..."
Browse Our Archives
Related posts from Stacey Dash