Do I Really Want Transgendered People to “Pee in the Bushes?”

THIS is why people hate the media.  I sat down with Entertainment Tonight to talk about my new book There Goes My Social Life: From Clueless to Conservative

which is coming out on June 6th.

By allowing men into the women’s bathroom, you open up the possibility that NON-transgendered men can saunter into the bathroom and do who-knows-what to women and children.

Think that’s extreme?  Well, it’s already happened.  In Chicago, a 33 year old man grabbed an 8 year old kid who went into a girl’s bathroom at Jason’s Deli.  He “strangled her until she passed out.”  The mom heard the ruckus, ran in, and the customers at the deli had to go in and restrain the man until the police showed up. (Read about it here.)

On and in a Texas Target, a girl was changing clothes in the female dressing room when she saw a man with a cell phone filming her taking off her clothes.

The Entertainment Tonight reporter, however, pushed back. She said, “Well, what if they can’t decide what gender they are that day?”

That’s when I said, “OK, then go in the bushes. I don’t know what to tell you, but I’m not gonna put my child’s life at risk because you want to change a law so that you can be comfortable with your beliefs — which means I have to change my beliefs and my rights? No.”

Does that sound heartless and mean?  It’s not.  I have been hit and hurt by men, and I will NOT stand by and let the MINORITY of the people put everyone at risk.  I just won’t do it.

I hope that Entertainment Tonight will put out the whole audio of our conversation.  Or maybe they’ll pull a Katie Couric, deceptively edit our talk, and I’ll never give them another interview.  I know they’ve already leaked a portion of the interview to Us Weekly to make me look bigoted.  I’m not.  I’m reasonable and I’m sick and tired of all this. 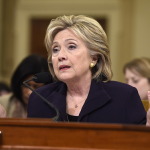 June 2, 2016 Hillary Fans Definitely Didn’t Like the Film Rob Lowe Recommended as ‘Perfect Memorial Day Movie’
Recent Comments
0 | Leave a Comment
"Hi there, sluggerz.For the purpose of what I talk about re: racism, it's to do ..."
penpusher Snoop Dogg threatens to “roast the ..."
"Can you give your thoughts on slavery worldwide? After all, slavery didn't start in the ..."
sluggerz Snoop Dogg threatens to “roast the ..."
"Hi there Bob Wehadababyitsaboy.The problem we must negotiate, when attempting to have some semblance of ..."
penpusher Haircare ad featuring white girls angers ..."
"Are you some kind of idiot? You think that EVERYBODY doesn't deal with shit like ..."
Bob Wehadababyitsaboy Haircare ad featuring white girls angers ..."
Browse Our Archives
Related posts from Stacey Dash