But what about those of us who are sensitive to the unseen world of energy? 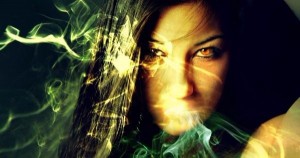 Highly Sensitive Witches are people who have a relationship with the spirit world or energy around them. They see, feel, hear, and/or know things that are beyond this realm.

If you answered yes to two or more questions, you might be a Highly Sensitive Witch.

We are Connected to the Other Realms

These kinds of experiences are common among us Highly Sensitive Witches. We all have a story, or several stories like the ones mentioned above. At one point, we realized our spiritual practice helps us acknowledge this energy and enables us to work with it constructively. I dare say most of us are what we are – pagan / witch / shaman / druid, etc. – because of our sensitivity to energy. (I use energy here as a generic term for all kinds of work, sensitivity, and feelings.)

Energy is all around us – it’s what makes up the world from a physics point of view. Think about wireless energy and how impossible that sounded just thirty years ago. And yet, now, most of us are using wireless technology every day.

I believe psychic energy is much the same — mysterious now, but someday, it may be commonplace and easily accessible. Tapping into that energy, being aware of its currents, and interpreting our findings is part of our paths. Otherwise, why would we have these traits?

Confirmation of our Connection

Whenever I notice a coincidence or this kind of occurrence, I experience a positive feeling, but it wasn’t always this way. When I was younger and I experienced things I couldn’t explain, it used to scare me a little. Things can get pretty otherworldly very fast. However, I’m not afraid anymore. I see it as confirmation that I’m on the right path, and possibly that I should act on my intuition.

Connection to the Spirit Realm

Like 18% of Americans, I can see ghosts from time to time, usually from the corner of my eye. They appear as translucent-white blue energy. For many years, I dismissed these ‘weak visions,’ because I had no knowledge of what they were. Until the impossible happened.

One night, I was walking around in a graveyard, and I thought I saw a ghostly energy running around an old tree. It looked like a little kid, playing a game. A name came to my mind – Bobby. I said it out loud, wonderingly. The figure stopped. I glanced down at the nearest tombstone – the first name was Robert. I gasped and immediately froze.

After a moment, the spirit started running around the tree again, not caring that I had a connection to him and knew his name before seeing his tombstone. Then, I realized there were two spirits running around the tree. It looked like they were chasing each other. The energy was very playful. Another name came to my mind – Michael. I looked down at the next tombstone, prepared to freak out, but instead, it read Abigail. I laughed at myself and how silly I was. That is, until I saw the very next tombstone. The name Michael was carved into it.

There’s no rational way to explain how I knew those names before seeing the tombstones. Of all the names to pick from, the chances are less than 0.1% for me to get both correct.

That moment was a monumental marker for me – it was proof that I couldn’t go back to the way I thought things were. There was some kind of magic within me – a connection to the spirit world. I knew things that couldn’t be known, and I couldn’t unknow them.

I tried to talk with the ghosts. I told them about the other side, and told them to go to the light, but they ignored me. They seemed happy, so I left.

Extrasensory perception, or ESP, is another kind of energy sensitivity available to Highly Sensitive Witches. I can’t tell you how many times a word pops into my head and someone says it out loud. It’s almost as if the word is hanging in the air, ready to be picked like an apple by the brain.

Another example of ESP is locating things or people, like my faery godmother did when she helped the police locate missing people. While I don’t have quite as strong of a connection, I have had my share of amusing interactions.

One of my favorite psychic moments came to me in the most mundane place ever – a Walgreens drug store. I had asked a clerk where the plastic gloves were. While he walked me to the aisle, he asked, “Have you ever done a DNA ancestry test?”

“I want to…” He gave me a sad, lopsided grin of defeat. “But I’m afraid they’ll put my DNA on file, and I’ll be in trouble if my DNA is ever found at a crime scene.”

I shrugged. “Just give them a fake name. Say you’re Donald Duck.”

I smiled at him. “Just say you’re Donald Duck.”

“I can’t do that.” He breathed hard. “My name is Ronald Duckett.”I laughed, thinking he was putting me on. He wasn’t wearing a name tag, so I asked him to show me his driver’s license. He pulled one out from deep within his pocket. Sure enough, his name was Ronald Duckett.

Visions of the Future / Premonition

Premonition is another form of energy sensitivity that Highly Sensitive Witches may have. Have you ever had a dream or a daydream that came true? Have you ever had thoughts about a person only to find they were in harm’s way? While I have no idea how this works (timey wimey?), I hear about this kind of occurrence fairly regularly and have experienced it in small doses.

My greatest example of manifestation was when I was walking from the parking lot of the Renaissance Fair to the gate. I was twenty-three, and feeling particularly on-point with my spirituality lately, as I had been creating art, meditating, and practicing yoga nearly every day. “Okay, universe. I’d like to manifest a red feather.” I smiled at myself and continued walking toward the gate.

Just a few steps later, I came across the biggest, curliest red feather I’d ever seen in my life! I picked it up in awe, my heart clamoring in my chest.

That was the most instantaneous manifestation I’d experienced, and I should note that it doesn’t usually happen that strongly or quickly. Sometimes it takes years to manifest what you envision, if you manifest it at all.

Another sensitivity with energy could be the ability to heal people, such as with reiki or shamanism. Simply put, some people are able to transmute negative energy and replace it with good energy, even over long distances. They can make the person well again through chakra balancing and meridian tuning, or shamanism.

The awareness of where a person has energy blockages and removing them is a highly specialized skill.

How to Get in Touch with the Energy

I’ve found that my highly sensitive energy waxes and wanes. I don’t completely understand why or how, which is frustrating. I’d like to be able to wield it more regularly, but it comes and goes as it wants.

There are a few ways to try to turn it on. I’ve noticed that the more I’m in tune with myself, the more I practice my path, participate in ritual, meditate, do yoga, walk in nature, avoid energy-draining people, eat less-processed and vegetarian / vegan / raw food, and avoid annoying noises, the more I have the potential to be in touch with that magical energy. It makes sense if you think about it — the less your body is bogged down with energy-wasting activities, the easier it is to be connected to pure spirit.

Of course, with many psychic experiences, we see as if ‘through a glass, darkly.’ My results aren’t always clear or 100% correct. But even though the scientific method, aka repeatable outcomes, rarely works with this energy, I still believe in the importance of this type of sensitivity. It’s a connection worth recognizing and cultivating.

How to Live with this Energy

As I mentioned earlier, I use this energy as a sign that I’m on the right path. Sometimes, when a coincidence occurs, I dig deeper into the situation or person. I’m always intrigued with what I find. Sometimes it’s nothing, and sometimes the connection keeps getting stronger and stronger, and I find I have a wonderful new friend.

We’re ahead of our time as far as any technology for this energy goes, but we should remember that this was also a very ancient practice. The Oracle at Delphi was filled with Highly Sensitive Witches — the women there practiced premonition for hundreds of years. The many forms of shamanism also go back to before recorded time.

It’s nice to know that there isn’t as much fear of these gifts as there once was. Our ancestors suffered for centuries with the fear of persecution by people who misunderstood these connections, and thought they were evil. Nowadays, our pagan paths and the internet give us a connection with a community of like-minded people. We can discuss our connection to the unseen world and not feel isolated or strange. It’s such a relief to hear you’re not the only one who had these kind of experiences.