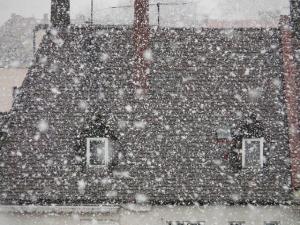 It has been a bad Lent, so far.

I resolved to abstain on the proper days even if I couldn’t fast, but my health has been too iffy even for that. I resolved to have prayer as a family in the evenings, but we’re lucky if we remember to say one Our Father before bed. I have only had the blessed combination of solidly improved health plus a ride to a liturgy once since Lent began, last week, and that was to a vigil in a Latin rite church with no singing. That’s just my spiritual life; as for my health, it’s iffy as ever, and pulling out of my usual January sickness atrociously slow. And then there’s what’s going on in the neighborhood.

The well-to-do at the edge of the cliff scored a victory; they’ve managed to pass their law banning future rentals in LaBelle, so they can gentrify it. Last summer they encouraged the police to fine poor people for not having the money to keep up our yards, and now this. I’m told it’s for safety; that Rosie, Michael and I are dangerous because we are poor. For safety’s sake it must be made harder for low-income people to spend their Section Eight or find a cheap place to live. Current rentals will not be affected– not yet, not until they pass some other law. But the homelessness problem will be allowed to gradually get worse now, and when the sight of the homeless offends the rich, more laws will be passed to hurt the poor. And it’s yet another reminder that in America, where the prosperity gospel is taken as an article of faith, the poor are blamed for every social ill.  There really aren’t words for how angry I am about the whole situation.

On top of it all, last night I realized that we’d forgotten one of the many forms that have to be filled out and delivered on time or we’ll lose our Medicaid assistance. There was no time to mail it; I had to sign it and deliver it in person downtown at the dreaded Department of Job and Family Services today. I was excited to be able to run an errand after such a long illness, but I didn’t want to go downtown.

I didn’t have a choice, so I went. But I went in the sourest of moods.

I brought a mesh bag of tangerines, so that I would have an excuse to visit the Friendship Room after I ran my errand. I hoped that might cheer me up. The tangerines rode the conveyor belt through the x-ray as I walked through the metal detector; they waited at the end of the table while I emptied my pockets and politely thanked the policeman. They bounced against my legs in my canvas bag as I trudged down the hall . They waited beside me for the social workers to call my number, stamp my form and give me a receipt.

I carried the snack to the Friendship Room, several blocks under increasingly dark clouds. I can’t even count how many times I’ve trudged around downtown– joyfully or fearfully, in the heat of summer or in the shivering dampness of a Steubenville winter. Usually I amuse myself by imagining things– imagining that I’m a famous, successful writer; imagining that I’m a Tolkien elf; imagining that the bag I’m carrying to the Friendship Room is a chest of gold for the baby Jesus. Today, I was too upset to imagine anything extraordinary– only petty, nasty things.

I suppose that’s not only true of Steubenville, of course. Hell is the state where you can only imagine petty things.

I arrived at the Friendship Room as a beggar, starved for company, consolation and insight, but they thought I’d only arrived as a donor and thanked me for the tangerines. I was too shy to stay longer than a few minutes, pretending to admire the fish tank.

I ducked into the Adoration chapel just across the street.

Christ was there, and that is everything. But I didn’t receive a great deal of consolation or insight during my visit. I opened a Bible at random to see if I could “get a word,” but the passage I got was the bit in Maccabees about Jeremiah hiding the ark. The comparison to my own life didn’t immediately spring to mind, unless the forces of Babylon are about to sack the Ohio Valley.

I was outside and walking back to the bus stop, when the snow began blowing.

I love the snow.  I’ve never grown out of my childish fascination with its beauty– if anything, it only seems lovelier to me now.  And here was snow falling on a terrible day when I’d expected rain. It started as hard, sleety specks blowing sideways down Fourth Street between the dull gray buildings, and then it turned to enormous, fluffy clumps.  My hair was soaked. My glasses were speckled. My coat was dotted with splashes. Heaven was pelting me with snowballs. I couldn’t see far ahead or to the side of me; I was alone in a swirling vortex of white. The Israelites were led through the desert by a pillar of smoke, Elijah was carried off to Heaven in a chariot of fire, Mary Pezzulo the first of sinners was momentarily lifted out of Steubenville by a blizzard.

It was gone by the time I got to the bus stop. The snow had melted on contact with the sidewalk, so there was no trace of it once the shower stopped. Four people were huddled under the overhang, shivering; the passengers on the bus were talking about the sudden whiteout that disappeared as quickly as it came.

I was smiling, at least inside.

On second thought, I don’t think there’s any such thing as a bad Lent. 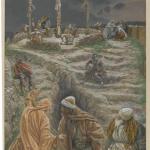 March 8, 2018 "Banished By Mark Shea" Chooses A New Obsession
Recent Comments
0 | Leave a Comment
"That essay was spot-on excellent."
Todd Flowerday The Patron Saint of Love and ..."
"What makes you so sure that bees are incapable of love? Many of their behaviors, ..."
3vil5triker . The Patron Saint of Love and ..."
"This is not about "choosing evils" and whatnot, its about being upfront and honest about ..."
3vil5triker . When Chaos Itself Becomes Victory
"I won't speak for Rebecca, obviously (I'm more conservative than she is on some points), ..."
Edwin Woodruff Tait When Chaos Itself Becomes Victory
Browse Our Archives
Follow Us! 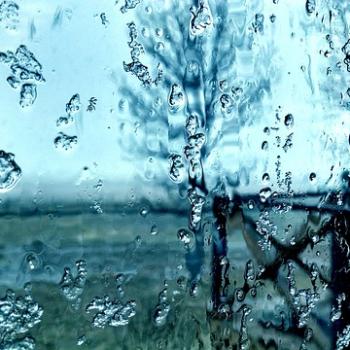