Where Do You Go When You Go To Mass? 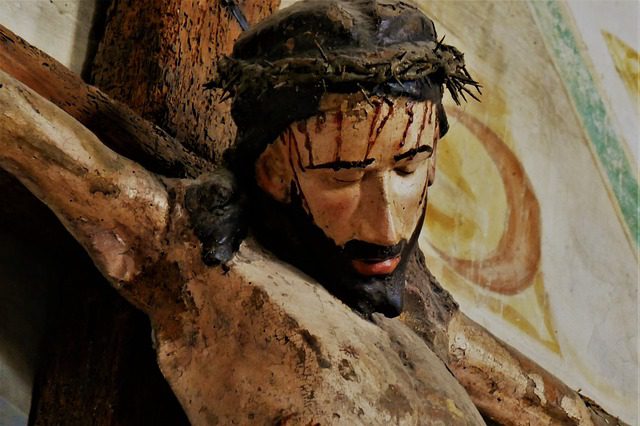 I wanted to be with Jesus.

Since the COVID emergency began, I’ve had a crash course on accepting the Presence of Jesus in all the places He is besides liturgy– in frustration, in loneliness, in suffering, in nature, in feeling like He’s forgotten all about you,  in growing things to eat, in feeding the free pantry at the Friendship Room. That’s important. But I was lonely for His unique presence at Mass, even though going to Mass sometimes hurts.

You’d think that getting to Mass in a place as famous for Catholicism as Steubenville would be easy, but it’s actually not. They expect you to have a car. There are no buses whatsoever on Sunday and the bus on Saturday finishes its route too soon to get me both to and from a vigil Mass. I’d have to bus out and walk back, which would be suicide in the hot muggy summer with fibromyalgia.  We used to be able to get rides to Mass, but no one is carpooling right now- and I don’t blame them in the least. I wouldn’t feel safe in a carpool either. And anyway, those Masses would be crowded and a danger for contagion, even despite the diocese’s efforts to keep them sanitary.

I decided to keep watching Sunday Mass on livestream and go to a daily Mass which would be more sparsely attended.  I would mask very carefully, keep sanitizer in my purse, whisper the responses and not sing, to make it safest of all. I’d receive the low-gluten Host in my hand, though I don’t like to do that, because that’s the rule now; I’d drop my mask for a moment and put Him in my mouth and then mask back up and sanitize hands. If I just did that once in a blue moon, while the Sunday obligation is dispensed and it’s dangerous to go anywhere, I might be able to be with Him and not feel so desolate.

The afternoon daily Mass uptown was too late for me to be able to get back on the bus, but the very early morning Masses would work if I walked to a different bus stop than my usual, three blocks from my house, and hurried from that stop to the church doors. It would be early enough in the morning that the heat wouldn’t roast my nerves for the day. I could manage, if only I could shower the night before, wake up before seven and roll out of bed, skip breakfast, dress, and run. Michael could stay home with Rosie. Fibromyalgia makes it very difficult to get a good night sleep, which means I usually drowse in bed until embarrassingly late, but I could make this work somehow. If I could manage this marathon, I would be with Jesus in the Eucharist just once, and that would be worth everything.

I took my sleep medicine very early in the evening, to get a head start and make sure I wasn’t groggy in the morning.

When I woke up, it was twelve-thirty in the afternoon.

I can’t even describe how frustrated I am.

Meanwhile, all over my social media, I’ve seen posts by a rather famous Catholic internet troll. He claims to have more gravitas than that, but that’s all he is: a troll, a bully, someone who says cruel or dangerous things to get a rise out of people and then claims it was a joke (or not). He’s in Opus Dei, apparently. I’ve got him blocked because I always block trolls, but people keep sharing screenshots of his tweets.

The troll was bragging about lying to the Contact Tracer, the person whose job it is to take your name and phone number so you can be contacted if it turns out you were exposed to COVID-19 at Mass so you can self-quarantine. He gave them a false name and phone number when he went to Sunday Mass at the National Shrine of the Immaculate Conception, and then he went to Mass and presumably got to receive Communion, and then he got online to gloat about his sin against the commandment not to lie. 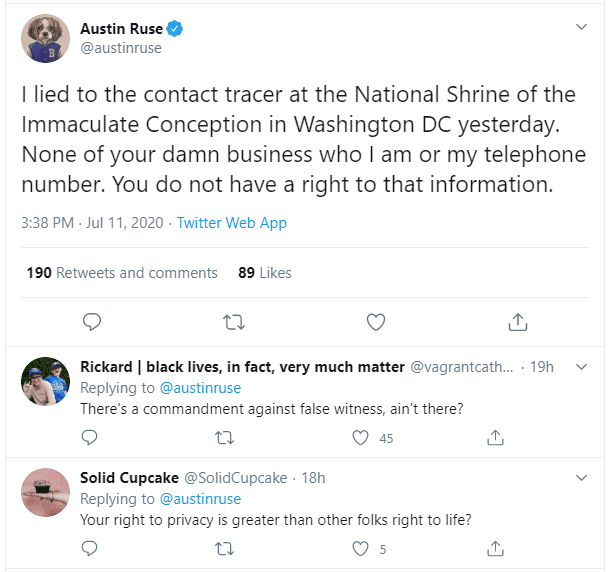 I find this particularly ironic, because this troll is not shy about his personal information. He once DMed me on facebook despite the fact that we’re not friends and I don’t want to be his friend, to give me his phone number “In case you have any questions about anything I wrote.” I still have the number in case the basilica contact tracer is reading this and wants it; you can write to Patheos and ask. But regardless, he gloated about lying to a person who was not trying to prevent him from receiving the sacraments but only trying to keep people safe from a deadly and highly contagious disease.

When asked if he felt bad about potentially infecting his family and whether he thought it was wrong to kill someone by the sin of omission, he answered with the bratty impudence we’d expect of trolls and bullies: 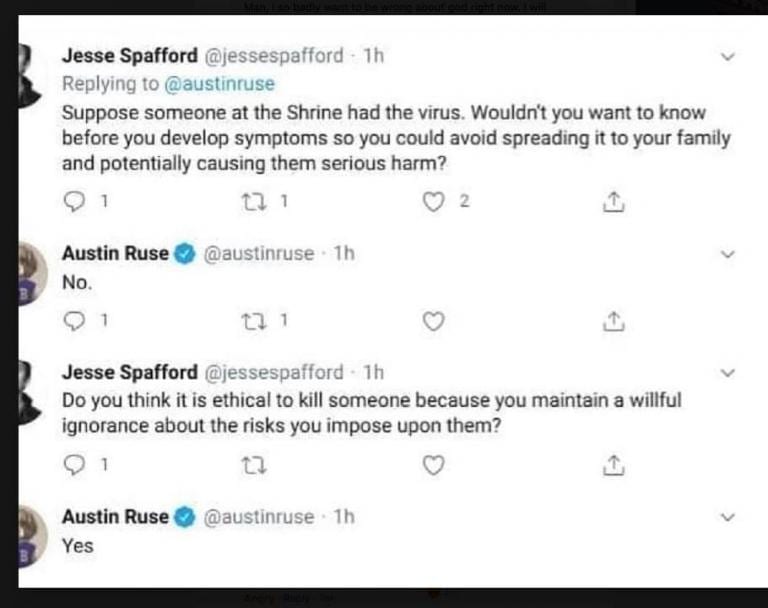 Everyone who’s taught third grade, or been a third grader for that matter,  knows there’s no point in reasoning with a child acting like this. They’re only trying to get a rise out of you. Keep them in at recess and make them write an essay, but it won’t reform them. Nothing will.

And of course, later, he resorted to the “it was just a joke” stage of bullying: 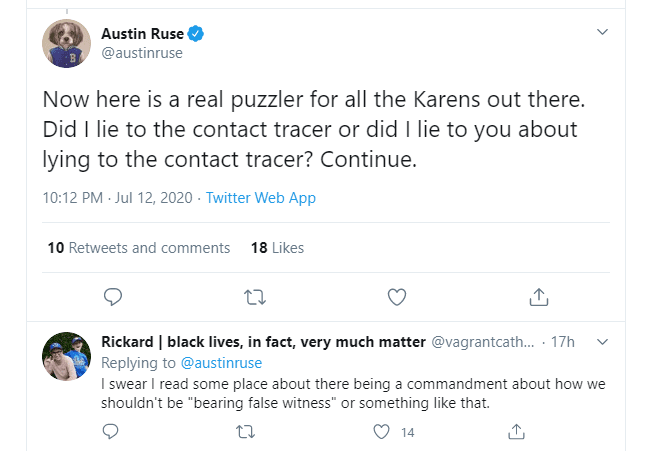 None of this matters. He is not important. He’s a pest who’s only doing this to ramp up publicity for a book he wrote, which is out next month and which will sell well. Some people really like to read bullying books written by trolls. There’s nothing I can do about that. I admit it’s stupid to even draw attention to him but the book would have done well with or without my help.

I am just frustrated.

Do other Catholics even worship the same God I do?

What is the Liturgy?

Where do you go when you go to Mass?

Isn’t it Calvary and Paradise at once? Aren’t we present at the Lamb’s High Feast just as we will be in Heaven, and also at the Passover in the Upper Room, and also on Golgotha watching Him bleed to death? Don’t we receive the Body of Christ and become One with the suffering Lord, one with the risen Lord, and also one with one another so that everyone who partakes in this mystery become members of the Body of Christ?

Shouldn’t that sacrament be absolutely transformative? Shouldn’t you be reverent and aware of every aspect of your life eternally pregnant with Divine Grace, because you went to Mass? Shouldn’t you try and act like a person who was present on Calvary and in Heaven?

Apparently, when some people talk about going to Mass, they’re talking about something they do for the heck of it, or because they’re accustomed to doing it, or so that they’ll look the right way. And some people go to Mass so that they can own the libs and bully others for fun.

They go in, sit and stand and kneel in the Divine Presence, receive His Body and Blood, and they go back to their homes unchanged and brag about what an impish person they are for having told a lie that might get somebody killed.

Yes, I suppose I’m just jealous that someone else got to be there with Him.

I will try again tomorrow.

I will try again a thousand times.

I want to be with Jesus.

July 15, 2020 In the State of Grace
Recent Comments
0 | Leave a Comment
"In five days the Groper-in-Chief, his lickspittles, and his loonies will still be a factor, ..."
alwayspuzzled The United States is Executing the ..."
"How silly."
Ned Lemon The Death Toll of the Pro-Life ..."
"My gr-grandmother died when my grandmother was 13 or 14 and her younger sibs were ..."
Bemused People are Made of Stories
"If my husband and I are ever fortunate enough to own a house, our first ..."
Erica It’s Orwellian, But Not The Way ..."
Browse Our Archives
get the latest from
Steel Magnificat
Sign up for our newsletter
POPULAR AT PATHEOS Catholic
1

Catholic
It's Orwellian, But Not The Way You Think
Steel Magnificat

Reflections on the Epiphany Insurrection
It is also painfully obvious that the police took much longer to...
view all Catholic blogs
What Are Your Thoughts?leave a comment
Copyright 2008-2020, Patheos. All rights reserved.