Exile: The Past is Prologue

Exile: The Past is Prologue April 3, 2009 Elizabeth Scalia

Today at mass, our priest – by no means a reactionary sort – remarked on the Gospel reading for the day, which was Jn 10:31-42. I took notes, but still am paraphrasing a little:

“I think the men who wanted to stone Jesus were offended that he would come in their era, that he would intrude on their time with his messianic talk. Because it’s one thing to look for and hope for Messiah, and quite another to have to encounter Messiah – which demands an interior, real and lifelong change, a delivering up of self.

But we cannot chose the time of God’s coming, and that is true whether we’re talking about our individual lives, or in terms of the whole world. All we can do is learn to read the data, and then respond in a right way. We have the tools and guidelines, and we must be prepared to live them – no matter what the times bring – live them, righteously and fearlessly, understanding that many, many will seek the world and its answers, because the way of the world appears easier. The world can be touched, seen, smelt, it seems like the reality, and they cling to it. For the rest of us, all we can do is be faithful. Will it be scary? Yes. Will we be abandoned? Not on your life. Do not be afraid, and just keep moving on to the next right thing, and then the next.

I liked his whole brief sermon, especially the part about the world seeming easier, because we can “sense” it – but we know that the world, and most of what goes on around us, is all passing trend or profound illusion. We know that if the atoms around us cease to move, everything “real” will crumble, and so “reality” is in some ways conceptual; in this form we are exiles – our truest selves are currently “as unknowable as any distant star,” (Chesterton, again). We also know that everything that is going on now, has always been going on. Everything that is to come, has already come.

It is difficult – because we are creatures in bodies, surrounded by unending stimuli – to remember that things are passing, that illusions abound, or even that we are living in exile. But as Christians we do precisely that. We live in exile to our true home, and our truest natures, and while we are here we must – as Richard John Neuhaus discusses in his book American Babylon; Notes of a Christian Exile, maintain our courteous and just citizenship in a world that does not quite understand us or know what to do with us.

In this, we can ask for help from a very heroic but little known man who spent more time in prison (mostly in solitary confinement) than Nelson Mandela, for the crime of keeping fidelity to his faith: Ignatius Cardinal Kung Pin Mei, of China, who was made a Cardinal in pectore (meaning, ‘in secret, in the heart of the pope’) while he was still imprisoned.

From a brief biography:

When the Communists took over Shanghai in 1949, Father Kung was appointed Bishop of Soochow on June 9, 1949, and consecrated Bishop on October 7, 1949, feastday of Our Lady of Rosary. Later, Bishop Kung was named Bishop of Shanghai and apostolic administrator of Soochow and Nanking on July 15, 1950.

In just five short years, Bishop Kung would become one of the most feared enemies of the Chinese Communists — a man who would command the attention and devotion of the country’s three million Catholics and who would inspire thousands to offer their lives up to God… 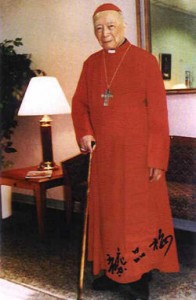 Knowing his arrest was imminent, Bishop Kung trained hundreds of catechists to pass on the faith to future generations. The arrest finally came on September 8, 1955, when the Bishop and more than 200 priests and Church leaders were taken overnight.

Months after his arrest, he was taken to the dog racing stadium of Shanghai to publicly confess his “crimes.” Thousands were present in the stadium as he was pushed to a microphone, hands bound behind his back, and wearing only Chinese pajamas. Instead of a confession, though, the authorities heard, “Long live Christ the King! Long live the Pope!”

The assembled crowd responded, “Long live Christ the King! Long live Bishop Kung!” The authorities quickly removed the Bishop from the scene.
…
Bishop Kung spent thirty years behind bars, much of it in solitary confinement. He was not permitted to receive visitors, letters, or money to buy essentials. In 1985, he was released from prison to serve another ten years under house arrest. After two and a half years of house arrest, he was officially released…

And a rather surprising article from Time Magazine, circa 1960, discussing China’s arrest of Chinese priests, including Kung, and their reluctance to also arrest an American Maryknoll priest, Bishop James Walsh:

When the Communists took over eleven years ago. Bishop Walsh fell under constant surveillance and expected arrest momentarily…Once, when he was staying with a group of Chinese priests, the police arrived to arrest them. Bishop Walsh, assuming that he was included, packed his bag and went out to join the others. When the police turned him back…Bishop Walsh was so angry that he threw his hat on the ground and jumped on it. In 1955, the Communists offered to repatriate him along with 21 other Americans, but James E. Walsh refused.

Along with Bishop Walsh, 13 Chinese priests were sentenced in Shanghai to terms from five to 25 years. And there was one life sentence—for Bishop Ignatius Kung Ping-mei of Soochow. Slender, smiling Kung Ping-mei, 59, has all the qualifications to make himself hated by the Reds. Born to a wealthy Roman Catholic family in a small town near Shanghai, he studied for the priesthood in Shanghai’s French Jesuit College at Zikawei, where he learned to speak perfect French and imperfect English and to understand Westerners…In 1949, as the Communists took power, he was made Bishop of Soochow.

From the beginning, Bishop Kung knew what was in store for Chinese Christians, and that compromise was useless. But he was not arrested until 1955. The charges: 1) opposing the Communist plan to set up a schismatic Catholicism free of Vatican control, 2) opposing land reform and the Chinese assault on Korea and 3) protecting “counter-revolutionaries.”

“…hated by the Reds…” Imagine Time writing that today!

By the way, those three charges brought against Cardinal Kung are just the sorts of charges we will eventually see brought against other church-folk. As the preacher today said, look at the data.

In 1991, while in Rome celebrating a mass for the intentions of Catholics in China, Kung preached:

So we must not be surprised when persecution comes because it is a normal event for the Church to suffer persecution. Once, when Pope Pius XII received a group of seminarians in audience, he asked them how many special signs distinguished the true Church of God. They answered immediately without further thinking, “It is one, holy, catholic and apostolic.” The Pope said, “There is still a fifth sign.” The seminarians did not know how to answer. The Pope said, “Persecution.” So, if the Church enjoyed peace all the time without any persecution, it would be very abnormal. It would be a reason for us to worry and examine ourselves lest anything was going wrong. Perhaps we were not living as faithful disciples of Christ? As persecution must be expected, it comes as a special sign of the Church and we should not try to make compromises or concessions of any kind in order to bring the persecution to an end quickly. We ourselves cannot take the initiative to create or arouse persecution. But if it comes to us one day, not only should we accept it readily from the hand of God but we should even rejoice and be glad. As the Acts of the Apostles records, .”… after they were beaten, the apostles left the Council, full of joy that God had considered them worthy to suffer disgrace for the name of Jesus.” (Acts 1:41)

That whole sermon is worth reading.

Before his death, Kung was presented with a Key to the City of Stamford, CT, and this is what he said:

… It is my sincere wish that, through the continuous leadership from the Government of the United States to help and influence the Government of the Peoples Republic of China, my people and my country will one day also enjoy the same true freedom of religion, expression, the human rights and justice in accordance with international standards.

Look, liberty is not lost in a day. It is lost in increments and inches. Today you will not smoke in a pub – or smoke at all – even though those in charge might. Tomorrow the government will set your house temperature for you, while keeping their own set to their comfort levels. They will tell you how much money you may fairly earn, while “they” are not quite so limited. Next year your son will be forced to participate in mandatory volunteerism, and so will your mother. Soon you will be advised to abandon your hate-filled intolerant church for the approved and correct one. Someday, you may be asked to bow before someone and you will have to say “yes” and then live with yourself, or say “no” and live with those consequences. The banality of slavery…it is almost a tedious thing.

Just be ready, is all I am saying. And practice prayer – which is the most subversive of liberties; it can never be taken from you, and is a source of power and strength. Train yourself in prayer. Begin now, so that you are a fit, skilled practitioner when the need arises.

It will be easier to train yourself, and to read the data, if you put on the mind of exile before it is forced on you. What you do or give freely is never diminishable.

Ignatius Cardinal Kung, from your place among the holy men and women who stand in the presence of the God of All Creation, please pray for your brothers and sisters who live in worldly exile, that those who worship in freedom and those who yearn to do so may remain strong in faith. Where we are persecuted, let us remember that we are not able to choose the time of Christ’s coming or his deliverance, but that we are never to be abandoned. Pray for us, that we may learn to pray well, and with peace. Amen.

More on the persecution of Christians in China

April 4, 2009 SoulWow Clean, Cobb & other things
Browse Our Archives
get the latest from
Catholic
Sign up for our newsletter
POPULAR AT PATHEOS Catholic
1