I haven’t commented about the creepy “Happy Anniversary Video” celebrating 40 years since Roe v. Wade; the suave African American man, holding a rose and cooing about the wonder of this anniversary really is, as Marc Barnes writes, “the creepiest sh*t…”

If you haven’t seen the video, you should go to Marc’s place and watch. One of the truly chilling (and, yes, creepy)things about it is that for African Americans, abortion in America has been a true genocide. As we learned last week, in New York City, abortion ends almost 70% of all African American pregnancies.

So, yeah, the good-looking African American man promising to make sure women, and especially African American can keep having abortions — and as many as they want, for any reason, even up to deliver, if some have their way — is a staggering piece of business and to my way of thinking, as anti-woman as it gets. Yeah, baby, we’ll make sure you can keep aborting those babies so we have no responsibilities at all…

This is not a rant; it’s reality. Do you want to know what Margaret Sanger, the great “heroine” of Planned Parenthood, and abortion-advocates and committed elitists throughout the nation had to say about African American and lower-income populations?

We should hire three or four colored ministers, preferably with social-service backgrounds, and with engaging personalities. The most successful educational approach to the Negro is through a religious appeal. And we do not want word to go out that we want to exterminate the Negro population, and the minister is the man who can straighten out that idea if it ever occurs to any of their more rebellious members.

All of our problems are the result of overbreeding among the working class, and if morality is to mean anything at all to us, we must regard all the changes which tend toward the uplift and survival of the human race as moral.

Eugenics is … the most adequate and thorough avenue to the solution of racial, political and social problems.

I have no doubt that Sanger would have applauded yesterday’s article of full revelation at Salon, and the admission that “Sure, abortion ends a life, so what?” That writer echoes Sanger: some lives are worth more than others. She also writes that a life in utero is a life “worth sacrificing.”

Sorry to keep talking about it, but the full-on creepiness of yesterday’s article, combined with that “Happy Anniversary, Baby” video makes me think of Edgar Allan Poe’s The Masque of the Red Death. These folks are throwing off their masks — perhaps because they feel like the last election has put them beyond the reach of accountability or loss — and it’s all just as bone-chillingly revelatory as that “masque off!” moment when the revelers face the dread emptiness beneath masks and costumes and realize that they are all dead people walking, irredeemable and beyond hope.

The story and the title, they’re so fitting, in some ways. While living in New York Poe made friends with many Fordham Jesuits, but his tale does not relieve his characters with the promise of redemption in Christ. Presumably, the doomed revelers would have to step outside, away from Prospero and his Castle, in order to find Him. 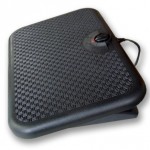 January 25, 2013 As I Watch Images of Cold Marchers...
Browse Our Archives
Related posts from The Anchoress