Our Future Will be Hunger Games USA

The nation is already accustomed to watching “reality shows” where ordinary folk — their foibles and failures — are served up as entertainment. And we’re already comfortable with an idea of separate standards for the elite folk who fly private jets to global warming conferences and the rest of us, who are meant to stay home and hang out the wash.

So, these two headlines crawling across my twitter timeline, one right behind the other, did not surprise me at all:

1) Most Literate City is Washington DC: well, that’s not really surprising. People with degrees from good schools (who have both connections and student loans) need to go where the jobs are, and our expanding government has created lots of excellent-paying jobs with good benefits. Lots of bureaucrats need to be put in place to oversee and enforce all of the new rules-for-little-people being signed into law.

2) California No Longer Requiring Eight Graders to Take Algebra. The reasoning is, the kids can’t do it, aren’t ready for it, particularly minority kids. So, rather than find ways to help bring them up to speed, let’s just make it easier, and deliver the message that we don’t expect much from them, anyway.

I read that and think back to the nuns who taught us in elementary school — and our classes usually had between 40-50 kids. We were not all “great learners”; some of us were coming from very dysfunctional home situations — alcoholism, abuse, neglect, scant funds — but they made sure we learned. They expected us to, and because that message was clear, we did.

Anyway, those two headlines reminded me of this one: Washington’s Economic Boom Financed by You

So, if the educated, literate and monied people are all going to be congregating around the “Capital City” and illiteracy (and the eventual poverty it will bring) are to be acceptable alternatives for some of us, then we are well on our way to living out The Hunger Games in all of its blithe vulgarity and hardscrabble pain.

The other thing that crossed my twitter timeline concerned the Killer Cop story about a Los Angeles police officer who is rampaging and murdering, and whose pro-gun control 21 page manifesto gives pally shout outs to Hillary Clinton, Chris Matthews, Barack Obama, (the cop loves Michelle Obama’s new bangs!) Charlie Sheen, and others. The manifesto and his bizarre addresses to public figures in news, entertainment and politics gives a sense that he’s lost touch with reality, of course, but so many of his references were television-related that I couldn’t help thinking, “this is your brain on non-stop pop-culture/political news.” I can imagine his ideological mirror writing similar praises to Limbaugh or Krauthammer. Madness precipitated by too much fantasy, too much glam-lionization of drug-addled, doltish celebrities, too much reality-obfuscating propaganda disguised as news.

We’re in a lot of trouble. The Washington Post wonders, Are we in the End Times of Trust in Government?

Oh, yes. But I think we’re also in the End Times of being able to rescue ourselves from this headlong tumble we’re taking as a nation willing to be lied to, comfortable with fakery and fecklessness, and content to caricature and sneer at the people trying to preserve basic freedoms.

Peggy Noonan’s column in the WSJ this week notes the wild approval America registered for a Super Bowl ad that featured the voice of Paul Harvey extolling smalltown virtues that are dismissed as cornball, these days:

. . .it spoke respectfully and even reverently of others. We don’t do that so much anymore. We’re afraid of looking corny or naive, and we fear that to praise one group is to suggest another group is less worthy of admiration. . .it spoke un-self-consciously in praise of certain virtues—commitment, compassion, hard work, a sense of local responsibility. . .Harvey has the farmer get up before dawn, work all day, and “then go to town and stay past midnight at a meeting of the school board.” Notice the old word “town,” not “community”—that blight of a word that is used more and more as it means less and less.

. . .it explicitly put God as maker of life and governor of reality, again un-self-consciously, and with a tone that anticipated no pushback. God, you could say anything in Paul Harvey’s day.

Emphasis mine. I remember those days. How suddenly and quickly they slipped by us.

Noonan used the same column to illustrate what I mean by “reality-obfuscating propaganda” when she looks at 60 Minutes’ Steve Kroft and his recent “interview” of President Obama and Hillary Clinton:

The Kroft interview was a truly scandalous example of the genre. It was so soft, so dazzled, so supportive, so embarrassing. And it was that way from the beginning, when Mr. Kroft breathlessly noted, “The White House granted us 30 minutes.” Granted. Like kings. […] We are living in the age of emergency—the economy, the Mideast, North Korea, Iran. The president has an utter and historic inability to forge a relationship with Congress. Unemployment seems intractable.

And the best Steve Kroft and “60 Minutes” could do was how wonderful are you?

Noonan didn’t bring up Mrs. Clinton’s recent testimony before Congress on the Benghazi attack that left an American Ambassador and three others dead, but I wish she had. I wish she’d noted that while the press spun her dramatic, emotional and hectoring testimony as a “victory” over her inquisitors (and the public quickly concurred, because the public loves spectacle) it served only Hillary and the administration, not the nation that is entitled to know what its public servants are getting wrong and screwing up. I wish Noonan had noted that drama, yelling and tears are what weak, duplicitous women resort to, when they are trapped — when they want to change the subject and gain the upper hand.

Clearly, Leon Panetta did not have that feminine option, but for the most part No-Drama-Obama and his administration play to the cameras better than any politicians I have ever seen, and the press hands them accolades for it. No wonder the Killer Cop thinks the press and the president are his shout-out pals.

Let me end on an optimistic note. Give yourself a half-hour at some point today, and watch this remarkable video, of Dr. Benjamin Carson speaking at a recent National Prayer Breakfast attended by the president and vice-president, their spouses, the new Secretary of State. After quoting proverbs, he says some bold things, dares to criticize the repressive habit of self-censorship we have fallen into thanks to political correctness. “PC is dangerous,” he says, “it muffles people. It puts a muzzle on them and at the same time keeps people from discussing important issues while the fabric of this society is being changed…we need to start talking about things…”

He talks about coming up from poverty: he is the son of a poor, illiterate mother (herself one of 24 children) who was himself a “bad student” — the sort of kid California might decide needn’t be expected to learn Algebra. He talks about the need to disenthrall ourselves from ideological fervor so intractable that it would rather the wrong thing than the right, if it means a “win” for “the party.”

He says it all right in the face of the people who really need to hear it, but we all do. Do yourself a favor and watch**. Benjamin Carter is a man of science and a man of faith; he puts the lie to the inane idea that the two are mutually exclusive, and suggests that balance is still possible.

**For some reason this video gets hung up around the 10:00 and 20:00 minute marks. Just move the cursor a tiny bit. It’s worth the trouble. 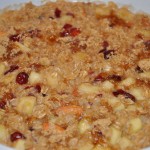 February 9, 2013 A Good Day for Baked Oatmeal!
Browse Our Archives
Related posts from The Anchoress