The Jesuit in the Dominican Robes, with the Franciscan Name

Well, I’ve been quiet through some exciting time, and I apologize for that. I was supposed to be writing to you from St. Peter’s Square when the white smoke billowed and the new pope emerged, but instead I appear to have brought something dysenteric with me from NY; since landing in Rome, have been unable to do more than cling to the bathroom floor begging for death or healing and offering up my ordeal for the conclave and now our new pope, Francis. I’m a girl who appreciates irony, and normally I might find this amusing, coming on the heels of this piece, but it’s been real agony, and this monsterous bug must now run its course. Please pray for me. I’m both sick and homesick.

I really hope to be on my feet by Friday, but no guarantees I’m drinking something to restore electrolytes and my digestive tract is still not sure it likes it.

And now that I’ve talked about me, how about that Francis, eh? What a moment! I’d been trying to follow Twitter but when my 4G became bogged down and nothing moved, I had to rely on the screams of nuns who quickly turned on the television and invited me to watch. On my way to it, I looked out the window and saw Romans running up the street to St. Peter’s which is a half mile from here. It was cute and put me in mind of the old Prince Spaghetti ads (and yes, I know I am dating myself with that reference).

So much has already been said about this new pope and his unprecedented name, his unprecedented religious order and hemisphere, but what struck me when he emerged to the papal balcony was that he was a Jesuit, wearing the papal versions of Dominican threads, taking a Franciscan name. And I thought: UNITY.

Pope Benedict took his name from Benedict of Nursia, the Father of Western Monasticism, and it is Western Monasticism that helped to restore civilization after the Dark Ages, largely by storing up its knowledge, creating a continuum for instruction and advancement. This pope takes his name from Francis, the church rebuilder who came along when we had balled ourselves up because of all we thought we knew.

Seems right that they should follow each other in papacy as in history. I read somewhere yesterday that “Pope Benedict taught us what faith means, this pope will teach us how faith is lived.” And that sounds about right to me, and I think we really need some real-time instruction in the living of the faith.

Seeing him, during his first mass — again, a Jesuit,with the Franciscan sensibility, the Dominican cassock beneath his chasuble, but now offering mass at a “Benedictine” altar (albeit with the big candlesticks sensibly moved)– we saw a Novus Ordo, but in Latin, and again the thought occurred: UNITY.

I feel enormous gratitude to the Pope Emeritus for understanding that the Barque of Peter, barely surviving the perfect storm of the last ten years, needed a different helmsman to restore her equilibrium — one with different gifts and strengths. Our last two popes have given us reams of theory. Now we need the example of application.

After Benedict resigned, I wrote:

Benedict…realized that the Church’s disorientation—and thus the world’s—would not be righted by yet another professorial speech, or another pilgrimage. A ship in profound danger requires a profound action, and Benedict has taken it. He is throwing all of us into the arms of the Lord in the belief that, as he said after his announcement, “the Church belongs to Christ, whose care and guidance will never be lacking.”

It is too soon to say who and what Pope Francis will bring our way, — he will show us who he is, soon enough — but I feel hopeful and energized by everything I have read thus far, from his riding the bus back home with the fellas after the big party, to the swift effect his example is already having on others, like Calah Alexander, to the fact that he did not automatically immediately restore Curial positions as is common, to the fact that the press and the extremists (on both “right” and “left”) who want so badly to define Francis seem stymied, as does the press. The rush to “define” Pope Francis is a power-play by those who understand that if they can define him, they can label him, and as Kirkegaard said, “the minute you label me, you negate me.” But I don’t think Francis will be easily labeled or negated.

I love that. I love the fact that, as Katrina notes, Francis cannot be so easily pigeonholed. He is neither “left” or “right”; he is Catholic and therefore “both/and”. He champions neither the capitalists nor the statists and sees Social Justice as something more than a governmental checklist.

In this pope we may finally have someone who will transcend all the labels and put them forever to rest by showing us how to live the faith in all of it’s balance, paradox and seeming contradictions. In unity. And that, I think will finally restore our tossed and shaken bargue to True North. Or wherever heaven actually is.

I’m positive it’s not on this bathroom floor. Hopefully this will be my last dispatch from Miserable and Homesickland. Tomorrow I will be sunnier.

UPDATE: Don’t miss Tim Muldoon’s musings on this Ignatian/Franciscan Pope or Fr. Dwight’s take on what today’s visit to Mary Major may mean. In fact, just do keep an eye on our Catholic landing page for nearly constant writing on all fronts, that will take us right through to Easter, I think! 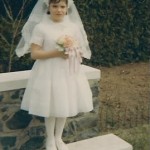 March 16, 2013 All In: the Deep Evangelization of Pope Francis -UPDATED
Browse Our Archives
Related posts from The Anchoress