Okay, I’ve been very upfront about it, so we already know that I am an idolator!

But perhaps you didn’t know how bad it has become. 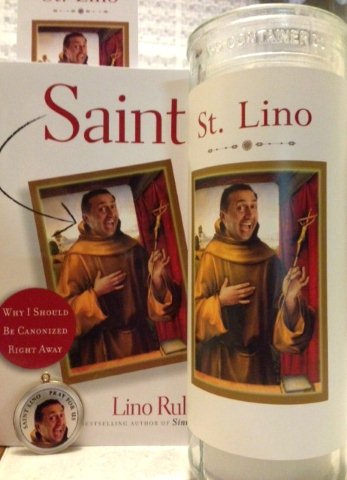 Aye, that’s not just a copy of Lino Rulli’s new book, Saint: Why I Should be Canonized Right Away, but a medal, and a prayer card and, yes, an I-mean-business 7-day candle.

Let’s call it what it is: The Shrine of Saint Lino de Sirius-ly Imperfect, patron of “Catholic Guys” and Gals, Bookies, and People Who Expect Every Flight to End in a Fiery Fall

Not everyone understands about that last part, but I happen to follow Lino on Twitter and on Facebook, so I know that while he can make flying funny, it is never quite fun, for him. As a fan, and a fellow fear-er of fiery demise initiated from the sky, I’m inclined to want to light that candle, and keep the medal around, too!

The trappings of sainthood are all very nice, of course, but why should Lino Rulli be made a saint, and why “right away”, exactly? Why shouldn’t Rulli have to die, like everyone else, and then be buried, unburied and examined and then interred again, like the rest of the saints? Why shouldn’t he have to deliver a couple of miracles — like World Series Wins for both the New York Mets and the Chicago Cubs in succeeding years — before he gets a place on the Roman Calendar?

Considering the work involved — those pennants, after all, would be pretty big miracles — why would Rulli even want to be proclaimed a saint? That’s the question I posed when I had an opportunity to interview him:

Elizabeth Scalia: Lino, in your last book you were doing such a good job of being a sinner — when was the moment you decided to shoot for being a saint?

Lino Rulli: Thank you for noticing what a good sinner I am. I must agree it’s one of my gifts. But why shoot for sainthood? I’m an extremely insecure guy. (Spoiler alert: Like most people with a need to be liked, I got into media! Crazy, huh?) So I’m always looking for ways of being affirmed. Whenever I’m in Rome at a canonization ceremony, I see tons of Catholics admiring someone who is now dead and in heaven. It occurred to me, I’d like that admiration. Without the whole “death” part.

Plus, I like finding creative ways of explaining Church teaching. Little things like the Church saying we are all called to holiness. We’re all called to be saints. Really? Well, if someone could wrap their minds around the idea that I’m called to be a saint…maybe they could see themselves as saints, too. 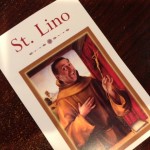 ES: Should your cause for sainthood arise, what prayer should I make that would have a good shot at both answering my intention and getting you a recognized miracle?

LR: We actually had prayer cards made, just in case that’s what is holding the Vatican back on canonizing me. I’ll sum the prayer up like this:
“O Holy and Insecure St Lino, Catholic Guy and friend of Jesus, I never weary of contemplating your nose…Come to my assistance, and ask that God may grant me (mention your request) if it be His will. I promise to do all in my power to encourage devotion to – and laughter at – thee. Amen.”

ES: It is prophetically proboscical!

This is a very amusing book and it is very touching in parts, but sometimes terrifying, too. You discuss the suicide of a friend and also a spiritual work of mercy that left you without gloves on a frigid night. How hard was it to decide what to leave in, what to leave out?

LR: Anything that would make me look too good I tried to remove from the book. As a sinner, I know my tendencies especially in the area of pride. So if something seemed like bragging or a way to boost myself up, I cut it. If, on the other hand, there were times I could look like a dope or a loser, I kept those in. We need more people in heaven whose lives were messy. Perfect people don’t inspire me. Imperfect people who fall down but get back up again; I’m thinking here especially about going to confession…that’s who inspires me.

I’m glad you found the book amusing, and I guess I kinda get paid to make people laugh, but I also wanted to show some serious side to me. The much more vulnerable side then I typically would show. Vulnerability and honesty are essential in the spiritual life. But I think we can do a better job being those things with each other. So the stories that were especially tough to write I thought were the ones that needed to stay in. The stories that were funny and easy, I left out.

ES: In the papal horserace, is JPII still your fave, or is anyone bringing up the rear at this point, for a photo-finish? And how good are you at betting, anyway?

LR: This has been a bad year for me when it comes to betting. I think all the money I got for my advance is being given to my bookie at this point.

With that said, JPII will always win. Not even a photo-finish for me. But let me be the billionth person to say: I love Pope Francis. Just love the guy.

And you want a safe bet? Here’s one: Put your money on Benedict XVI and Francis as canonized saints. They show us how holiness is lived out in different ways, in the very same era, and why the Church survives and thrives. Santo Subito times two!

I liked him as a Sinner, but I love him as a Saint, and I suspect he is right; both Pope Benedict and Pope Francis will be enrolled within the canon of saints. I also suspect they will beat Rulli there, but then he’s still a young man!

As we await those heady days, however, I highly recommend passing the time with this book which — laughs aside, and there are plenty of them — is deceptively serious. Rulli has written a quasi-manual that helpfully encourages us in living the sort of ordinary Catholic life that, when lived with mindful attention and holy intention, has made saints out of some surprising people.

Don’t let the fake shrine and the holy cards and the candle fool you; Rulli is irreverent about himself and his life, but not about Christ Jesus or the faith. Saint is full of humor, and it’s got a lot of heart, but it is packed with humility, too. 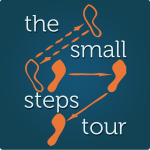 October 15, 2013 "God be my savior...": Screaming 'prayer' on a plane
Browse Our Archives
get the latest from
Catholic
Sign up for our newsletter
POPULAR AT PATHEOS Catholic
1