Twice today I have been very moved to come across gloriously beautiful — dare I say transcendent — images, where the poignancy of the moment was movingly emphasized by the small unconscious movement of a single hand.

First, thanks to Deacon Greg, I saw the La Stampa photo of Pope Francis kissing a man so seriously disfigured that most of us would likely find him difficult to look at, and would turn away.

Everyone is looking at this picture, and it is, indeed, breath-taking.

But this is the image, a few frames later, that really grabbed my heart:

When you go to the slideshow, you see La Stampa’s headline reads “Pope Kisses a Man Plagued with Boils”, and that would be bad enough, but I suspect the poor man is really afflicted with neurofibromatosis, also known as Recklinghausen’s disease, which can cause deafness, difficulty walking and sometimes crippling pain.

If it is indeed neurofibromatosis, then it is very possible that this man has been shunned and disregarded for decades. Some people would even look at him and decide that his quality of life is likely so miserable, so socially valueless that it might not be worth living. Pope Francis — like his namesake before him, who famously kissed a leper — thinks differently, and he wants us to think differently, too. Throughout the slideshow you see that more than simply kissing this man, Francis clearly prayed over him.

A kiss is pretty special, true, but laying hands upon that which can repulse us, and allowing them to linger there, and then praying with and for that person — that’s a wholly different, deeper sort of unity. Where they stood may have been very crowded, but in this moment there was a peculiar intimacy of oneness, and the way this challenged man lays his own hand upon Pope Francis’ arm is eloquent of it.

A Pope his laid hands on a sick man, and a sick man laid his hand upon that Pope with a sense of utter trust, safety, familiarity and consolation.

Look at that hand, and how confidently relaxed it is. This man is not clinging to Francis; he is uniting with him.

Serious healing is going on here, though it may not be obvious. We believe in things visible and invisible, and healing can be visible or invisible, too. Perhaps what is being healed in this moment is decades of injury — rejection and derision — heaped upon this man from a world obsessed with beauty and perfect fitness, and less so with the soul.

I wonder how much serious healing, spiritual healing, is going on — is perhaps begun — as these images are being passed around the world, thread by thread, email by email.

And then there is Musharaf “Mushy” Asghar, a Yorkshire lad who had missed a lot of school because his debilitating stammer had made him the object of bullies; his imperfection had made him — like the man above — a victim of derision and rejection. Watch the video. The whole thing is touching, but see if you notice the brief second wherein another breathtaking moment of human union was beautifully articulated.

Did you see it? Watch again and pay attention to 1:17-1:19, when the teacher is listening so intently to Mushy, and — all unconsciously — touches his hand to his own heart.

The hand-to-heart is one of those universally spontaneous motions that signals, “I’ve been plumbed unto my depths.” How rarely we get to see such moments, anymore.

That too is a hand that tells a story of healing. Look at the teacher; he is bedraggled; his shirt is ill-fitting; he likely works very hard and sacrifices much, including thoughts of himself, because there are more important things at stake than his appearance, or his wardrobe. You see what really matters to him in that fleeting moment. Hand to chest: here is fulfillment and love and union.

We so often pass right by what is most beautiful in life. These small unplanned moments are prompts to the rest of us — as meaningful as a conductor’s raised hand before the eyes of his musicians — and they’re saying “pay attention to the rests, the pauses, the small movements. They are what make the symphony coherent, instructive and worth diving into.” They help us see the whole picture. 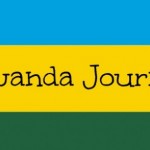 November 6, 2013
If you missed Lisa Hendey's Rwanda Journaling...
Next Post

Trying to Justify the Bomb – Stories and...
Seventy-seven years ago the United States unleashed the power of the atom...
view all Catholic blogs
Copyright 2008-2021, Patheos. All rights reserved.
Close Ad